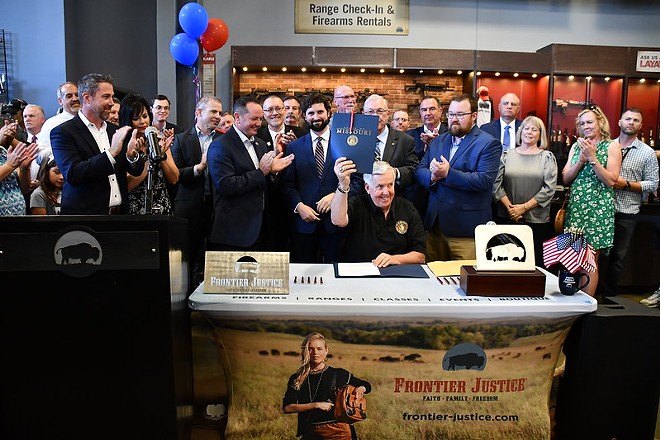 St. Louis and St. Louis County have responded to the Missouri GOP's new “Second Amendment Preservation Act” with a lawsuit. Filed today in Cole County Circuit Court, the lawsuit seeks to block the new law and deem it unconstitutional.

“2020 was the deadliest year of gun violence in our state’s history, and now the Missouri legislature is throwing up barriers to stop police from doing their most important job — preventing and solving violent crime,” Mayor Tishaura Jones said in a press release. “This harmful and unconstitutional law takes away tools our communities need to prevent gun violence. I’m proud to partner with St. Louis County in this effort to protect our region and stop this law.”

The new law worked its way through the legislature as House Bill 85 and was signed by Gov. Mike Parson a week ago during a ceremony at a Lee's Summit gun range. The act prohibits local and state law enforcement from enforcing federal gun laws, claiming they “create a chilling effect on the purchase or ownership” of guns, ammunition or accessories by “law-abiding citizens.” For example, federal laws like taxes or registration of guns, ammunition and accessories or tracking owners of these items would be affected by the act.

A police chief in O’Fallon, Missouri, recently resigned over the new law. As reported by KSDK, police Chief Philip Dupuis said the problem with the bill is “the poorly worded language that removes sovereign immunity and appears to allow law enforcement agencies and individual police officers to be sued for even good-faith, justified seizures of firearms in emergency circumstances."

He also said the bill’s language would “create a flood of weaponized litigation that will chill the legitimate peace-keeping duties of police." (The police chief also made headlines this week for his new aggressive pursuit policy, but it's unclear if that had any impact on his resignation.)

“They could have accomplished a lot more with better language,” Davis told the news site. “Any time you limit the police’s ability to do their jobs, it could pose a problem.”

Missouri Attorney General Eric Schmitt pulled prosecutors assigned to a highly publicized partnership with the U.S. Attorney's Office from nearly 24 federal drug, gun and carjacking cases just five days ago, as reported by the St. Louis Post-Dispatch. Nineteen of the withdrawals happened the day before Parson signed HB 85. In announcing the lawsuit, the city and county’s press release pointed to the bill as a “major disruption” at federal, state and local levels.

Federal law experts have also weighed in on the discussion, reporting that the new law cannot accomplish what it was written to do. The U.S. Department of Justice’s office has also described the new law as unconstitutional. The department pointed out under the Constitution's Supremacy Clause, federal law trumps state law. Parson and Schmitt responded they will fight “tooth and nail” to defend the new law.

“We will not tolerate any attempts by the federal government to deprive Missourians of this critical civil right,” they wrote.

Page, however, said the new law will do serious damage.

“This new law is like the state holding out a sign that says ‘Come Commit Gun Violence Here,’” Page said in the news release. “We can’t expect people to stay in St. Louis or to move their businesses here if we don’t do everything we can to reduce gun violence in the region, but this new law sends the opposite message to our residents and business community.”