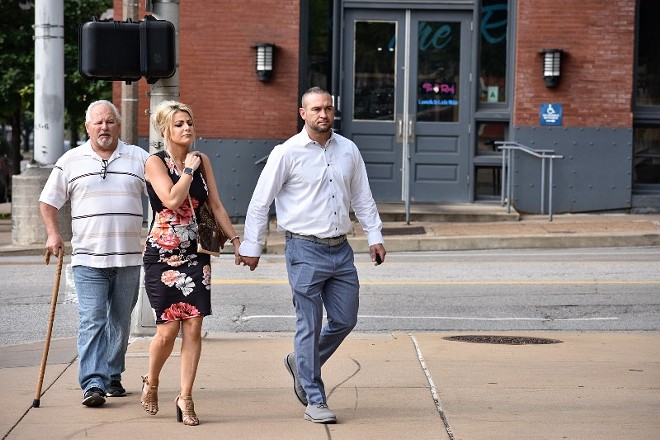 Ex-St. Louis cop Dustin Boone has been found guilty of a federal felony in the beating of a Black undercover officer whom he mistook for a protester.

Jurors this afternoon convicted the 38-year-old son of a former city cop of violation of civil rights for his role in the Sept. 17, 2017, attack on Detective Luther Hall. Jurors couldn't reach a decision on Boone's co-defendant, ex-police officer Christopher Myers.

Boone and Myers, 30, were among dozens of city cops assigned to the department's civil disobedience team, or "riot police," who swept up more than 120 people that night in 2017 during protests that followed the acquittal of a white ex-police officer in the killing of of a Black man. Hall, who was embedded with protesters, later told investigators that a group of uniformed officers "beat the fuck out of him like Rodney King," even though he followed their orders.

Prosecutors alleged Boone aided and abetted others during the beating. Myers was accused of smashing a cell phone the detective had been using to record events.

Hall was among more than twenty people who alleged police brutalized them during arrests that night, but no criminal charges have been filed in response to any of the other complaints.

In a previous trial this spring, jurors deadlocked on Boone, acquitted another police officer co-defendant, Steve Korte, and split on Myers, acquitting him on one count but failing to reach a decision on a charge of destruction of evidence.

The second trial began nearly two weeks ago. The case has made national headlines in part because of the trove of text messages FBI agents recovered after seizing officers' cell phones.

A first batch, released following the indictment of Boone and Myers and two other officers, showed the two and ex-officer Randy Hays gleefully boasting about beating protesters.

"It's gonna get IGNORANT tonight!!," Boone wrote two days before the attack on Hall. "But it's gonna be a lot of fun beating the hell out of these shitheads once the sun goes down and nobody can tell us apart!!!!

The message proved prescient as the FBI and prosecutors from the U.S. Attorneys Office began trying to prove the role Boone and others played in the attack. Both trials included hours of attorneys on both sides of the case going over photos of a nearly homogeneous group of police officers, obscured by the dark and their armor, including helmets and face shields. Just identifying who was who in pictures taken by a St. Louis American photographer became a herculean task — and an opportunity for defense attorneys to seed doubt about their clients' involvement.

Multiple people who claimed police beat them during protests said officers intentionally worked to cover their tracks, concealing names on their uniforms and homing in those filming so as to destroy their cameras and evidence of the brutality at play.

In this second trial, prosecutors were allowed to introduce an additional batch of text messages that they said showed Boone and Myers had a habit of trying to conceal their behavior and, in Boone's case, a bias toward Black people. The messages span multiple incidents outside of the protests, but a judge found they could be used to better understand the ex-cop's approach to policing. In one searing message after another, Boone used the n-word and described pummeling those who crossed his path during his short career as a St. Louis cop.

When one cop, now-former officer William "Beau" Wethington, texted Boone in March 2018 that he hoped they had "beat that kids ass," Boone's response was disturbing.

"We didn't take him to children's for nothin! Lol," Boone texted, adding, "There r so many damn RTCC cameras in the fifth now, I had to literally drag him behind a privacy fence to avoid one. Can't believe how inconvenient they have made things!"

That, prosecutors alleged, helped show Boone was willing not only to beat suspects, but to take steps to hide what he was doing. 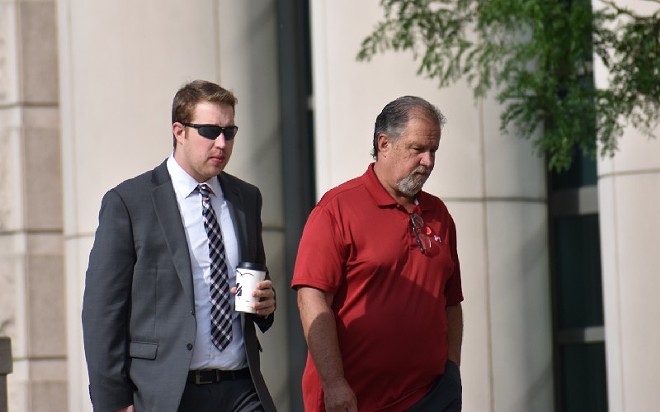 To Boone and Myers, Assistant U.S. Attorney Carrie Constantin told jurors, abusing protesters was fun. Prosecutors were able to show that Boone livestreamed the attack on Hall and other events that night to his then-girlfriend, Ashley Marie Ditto. As part of the investigation, they recovered Facetime logs showing the times of the broadcast — and Ditto's enthusiastic response: "That was SOOOOOO COOL!!!!"

It was only after Boone and Myers learned that Hall was actually an undercover police officer that they regretted their actions, Constantin said. Prosecutors claimed Boone later married Ditto in a rush, hoping to prevent her from testifying.

The couple walked to court hand-in-hand today as Boone arrived for a second full day of jury deliberations. Reporters for KSDK and the St. Louis Post-Dispatch, who spent the day in the courthouse, reported that jurors sent a series of notes today, saying at one point that they had deadlocked. U.S. District Judge E. Richard Webber instructed them to keep trying.

Shortly before 4 p.m., jurors delivered their decision: Boone was guilty on all counts, and they were hung on Myers.

“As a police officer for the City of St. Louis, Dustin Boone violated the sacred trust placed in him to serve and protect members of the community,” U.S. Attorney Sayler A. Fleming said in a news release. “Our hope is this conviction serves as a deterrent to those who consider abusing their authority and a step toward restoring the community’s faith in the justice system and law enforcement.”

Special Agent in Charge Richard Quinn of the FBI St. Louis Division said, “Law enforcement officers must obey the law as well as enforce it. Those who violate their oaths do a disservice to the communities they are sworn to protect and serve.”

The verdict leaves a question mark on any future prosecution of Myers, but it signals Boone is headed to federal prison. The violation of civil rights charges carries a maximum punishment of ten years. KSDK reporter Christine Byers reported that Boone was allowed to remain on bond while awaiting sentencing. He and Ditto were in tears after the verdict, Byers added.