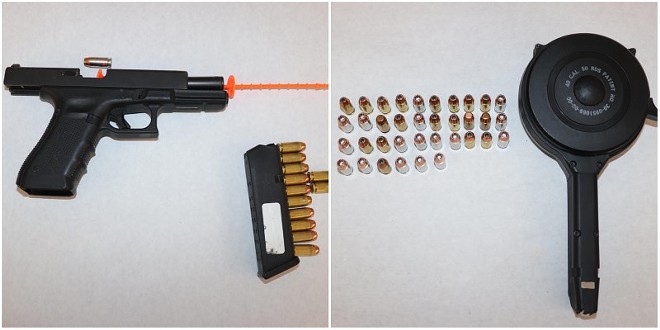 As St. cops followed a silver-colored Audi SUV down South Jefferson on Wednesday, a passenger raised up through the sunroof and opened fire on them, police say.

It was about noon and the first of two, separate incidents in which people fired on officers, police say. In both cases, officers were driving unmarked vehicles.

On South Jefferson, the Audi caught the attention of police because it had expired temporary tags, according to a news release. In the 2200 block, between Anne and Shenandoah avenues, the driver of the SUV made a quick U-turn. As they passed officers, one of the two people in the SUV shot from the sunroof at the unmarked vehicle, police say.

A 32-year-old officer returned fire, according to the release. No one was hit on either side, and police chased the Audi north before the SUV got stuck in traffic along the edge of the Gateway Arch National Park, near Pine Street and Memorial Drive.

Police say officers arrested two people, ages seventeen and 23, without any other trouble. A search of the Audi turned up a .40-caliber Glock handgun and 50-round drum-style magazine.

In a separate incident across town, police say, a 29-year-old shot holes in an unmarked SUV early Thursday morning. Officers say the man was on the sidewalk near Goodfellow Boulevard and Sherry Avenue just before 1 a.m., shooting at two other vehicles when police drove up. The man then shot at two officers, and continued firing when they parked, got out and shot back, according to police.

The officers were in plain clothes other than ballistics vests, which had "POLICE" printed on them, according to the release.

After the shootout, the man got in a white sedan and drove off through a yard and around a concrete barricade to escape, police say. Officers later found the man and the now-disabled vehicle about a mile north near Park Lane and Switzer Avenue in the North Pointe neighborhood. He was arrested.

Neither he nor the officers were hit during the earlier gunfight.