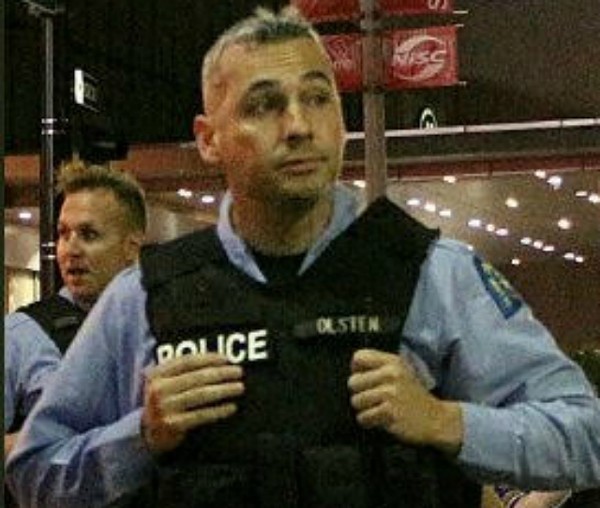 A St. Louis officer who was filmed outside Busch Stadium soaking a group of protesters and photographers in pepper spray in 2017 was justified, a St. Louis judge ruled Friday, rejecting testimony from other bystanders who said that the incident was a needless act of aggression.

On September 29, 2017, during protests over the acquittal of a former St. Louis cop charged with murder, officer William Olsten found himself near the center of a chaotic series of events in which several officers tased one man and bodyslammed a reverend — and that's when Olsten, caught on camera by multiple sources, sprayed a gathering crowd with mace.

"While regrettable, unfortunate and concerning that the complaining witnesses experienced the unpleasant effects of the chemicals," Clark wrote, "defendant's actions were justified under the circumstances."

Although video showed Olsten calmly sweeping pepper spray deep into the crowd, and then lingering near the line of people screaming and wiping the chemicals from their eyes, Clark wrote that the presence of verbal threats and two attacks on cops "unlocked the unrest of the crowd," thereby giving legal justification for Olsten's use of force even though it harmed those who posed no threat.

In his verdict, Clark wrote that in the moments before Olsten's actions, the crowd had reacted to the arrest of Rev. Darryl Gray, who was flung to the ground, and the tasing of protester Calvin "Cap" Kennedy.

These two arrests were examined in detail in an October 2020 RFT cover story. The investigation delved into the city's prosecution of Gray, highlighting the gaps and questions that arose between available video evidence and the officers' claims that they were physically attacked by a 63-year-old, 150-pound reverend who was wearing his clerical collar at the time.

Gray was charged with resisting arrest — the charges are still pending, his lawyer says — but he's currently suing the officer who slammed him into the ground, Ronald Vaughan, for alleged civil rights violations. (Vaughan is no longer with the department: In February 2021, prosecutors charged Vaughan with forgery in connection to a fabricated doctor's note he allegedly submitted to the department to get out of work.)

However, in the Olsten case, the judge described the arrests of Gray and Kennedy as "two separate assaults on law enforcement" — though neither man was ever charged with assault.

In Clark's verdict, the officers' narratives — that Gray and Kennedy had attacked them — served as part of the rationale for acquitting Olsten.

Olsten's decision to spray everything in front of him with mace, Clark wrote, "immediately followed two separate assaults on law enforcement," in addition to another person in the group who "threatened bodily harm." The threat was then increased by "even more numerous, angry individuals converging into the immediate area."

Olsten had not committed any assault, Clark ruled. In the conclusion of the verdict, the judge noted that "when an officer deviates from the oath and willfully abuses his authority, the community's confidence in law enforcement and the equity of our society are tarnished."

"Respectfully," Clark wrote, "the court finds that this did not happen here."

After the news of the verdict was announced on Friday, Heather DeMian, a prominent livestreamer and independent journalist who covered the 2017 protests, posted the video she captured that night as Olsten maced her and others.

"I wasn't a protester. I was an independent journalist photographing and livestreaming the protest and asking why they'd used a potentially lethal Taser on a protester," she wrote. "Olsten maced me with no warning whatsoever ..."

I wasn't a protester. I was an independent journalist photographing & livestreaming the protest & asking why they'd used a a potentially lethal Taser on a protester. Olsten maced me with no warning whatsoever in violation of the Constitution *&* SLMPD department policy. https://t.co/UfPYwWbg4N pic.twitter.com/j7K6VhxUIZ