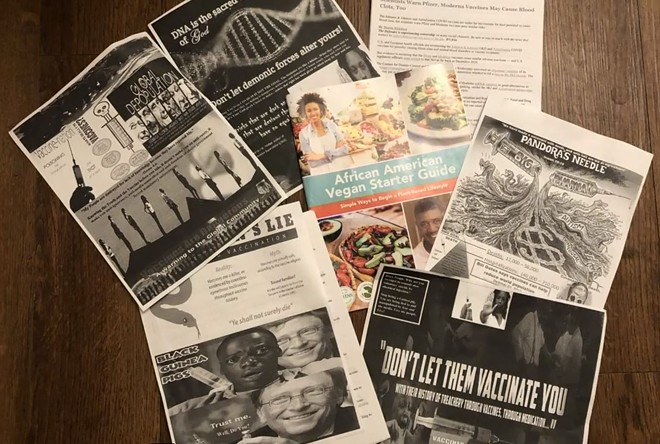 Residents in the Grand Center neighborhood of St. Louis had an extra helping of junk mail Sunday morning in the form of anti-vaccination flyers courtesy of a "Dr. Keith Lawrence," the purported operator of a natural health website also described as "God’s Emergency Medical Missionary Service."

"Don't let them vaccinate you," one flyer proclaims. Another featured clumsily edited images from the 2017 film "Get Out" mixed with pictures of Bill Gates — a frequent feature of contemporary conspiracy theories — along with the apparent warning that vaccine programs threaten African Americans and will treat them as "Black guinea pigs."

Overall, the flyers appear to feature a collection of memes and misinformation, though, when contacted by KMOV reporter Alexis Zotos, the good doctor himself claimed he was not actually opposed to COVID-19 vaccines, but merely "anti-ignorance and anti-lack of information."


However, on Lawrence's website, visitors can still find plenty of apparent ignorance, including a copy-pasted version of a list of reasons not to wear masks originally published last year by alternative medicine evangelist Ty Bollinger — a notable figure in the holistic medicine space and whose actual medical advice includes such gems as telling people with cancer they shouldn't undergo chemotherapy.

Still, Lawrence's anti-vaccine materials and websites don't appear to directly offer any alternative cures or products, and that was probably a smart idea on his part — as it may save him from the attention of federal and state agencies cracking down on snake oil salesmen. Last year, that attention fell on Bransons' Rev. Jim Bakker, who became the subject of national scorn in the early days of the pandemic after Missouri's Attorney General sued him to stop claiming that "Silver solution" could cure the virus.

That hasn't stopped others from jumping on the COVID-19 grift-train: On April 15, the Department of Justice and the Federal Trade Commission filed a civil complaint against St. Louis County-based chiropractor Eric Nepute, marking the first use of a Congress-approved law intended to stop businesses and individuals from advertising false coronavirus cures.

The lessons? Get your shots, folks. Don't pretend to be a doctor — and definitely don't leave bags of trash on peoples' porches.