Missouri Legislators Get Creative in Push for LGBTQ Protections 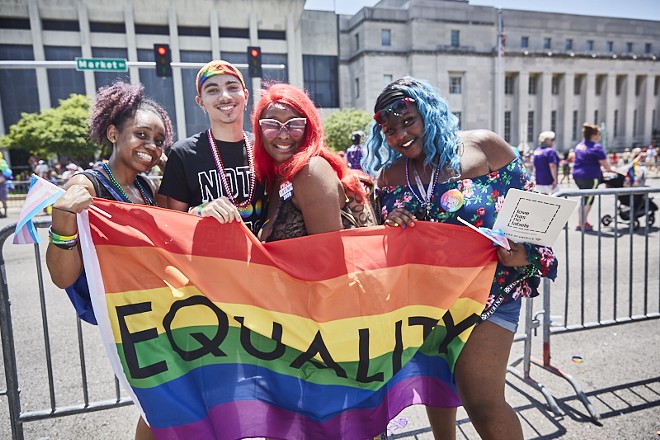 With progress stalled and the legislative session nearly over, a bipartisan group of lawmakers hoping to outlaw discrimination against LGBTQ Missourians have begun using an array of tactics to bypass the gridlock.

On Monday, a bill adding sexual orientation and gender identity to Missouri’s Human Rights Act was pulled from a committee where it had sat without a hearing and placed on the House debate calendar using a procedural move that hasn’t been utilized in more than a decade.

Two state senators — Democrats Greg Razer of Kansas City and Doug Beck of St. Louis — made separate attempts this week to attach more narrow discrimination protections to other bills moving through the process. And Rep. Wes Rogers, D-Kansas City, made a similar move in the House General Laws Committee.

Facing a tight deadline with less than a month left in the session, lawmakers in support of the legislation, often referred to as the Missouri Nondiscrimination Act, or MONA, say it’s time for its passage after 23 years of trying.

“The normal process doesn’t work for me and this bill,” Razer said on the Senate floor Tuesday. “And so I have to find places that I can try to get it on.”

But the persistent moves to try and seize on any viable path forward have eroded some lawmakers’ trust.

“Last night, as far as I’m concerned, MONA was offered to kill my bill,” said Sen. Bob Onder, R-Lake St. Louis, whose bill was tabled Monday after an amendment was offered to include a version of MONA.

“I don’t want to impugn any senators’ motives, but I think when things go fast and if things sneak through this body quickly without senators having an opportunity to know what’s in a bill and to be heard on that subject and have the opportunity to offer amendments, there is going to be a serious problem these last four weeks of session — serious,” Onder later added.

The moves to get MONA to a vote are reminiscent of lawmakers’ attempts in 2018, when they resorted to tapping colleagues who didn’t serve on a committee to help pass the bill out of a House committee for the first time ever.

House Bill 275, sponsored by Rep. Tom Hannegan, R-St. Charles, was referred to the House Children and Families Committee on March 10, where it has sat for six weeks without a hearing.

Under a section of the Missouri Constitution that is further codified in House rules, a bill can skip the step of going through the committee process if at least a third of lawmakers sign and submit a petition to the Chief Clerk ten days after it has been referred to committee.

From there, the bill shall be placed on the House’s debate calendar — essentially circumventing the committee process.

That move was used Monday, with the minimum 55 lawmakers needed signing on to a petition — 46 Democrats and nine Republicans. In addition to Hannegan, the other Republican lawmakers that signed on were Reps. Mike Stephens, Andrew McDaniel, Shane Roden, Shamed Dogan, Bill Falkner, Adam Schwadron, Chris Sander and Phil Christofanelli.

Hannegan said he had expressed his desire for a hearing to Rep. Mary Elizabeth Coleman, an Arnold Republican and chair of the House Children and Families Committee.

Asked about where MONA stands, Coleman said Tuesday she didn’t have anything to add.

While the bill has bipartisan support, it remains to be seen if it’s enough.

In the remaining three weeks, the bill would still need to be taken up by House Majority Floor Leader Dean Plocher, R-St. Louis, and garner the minimum 82 votes to pass out of the House. It would then head to the Senate, where its passage as an amendment has already faced hurdles.

Hannegan, one of only six openly LGBTQ members in the Missouri legislature, said this won’t be his last effort to get a vote on MONA this year.

“There are quite a few options. This was just one that was available that I took advantage of to try to get it to move a little bit quicker. Obviously, as an LGBT member myself, I mean, it’s just a personal thing,” Hannegan said, later adding: “If it’s fair, and it’s authorized, and it’s legal, and it’s a rule that everybody can use, then I think it’s fair game.”

The last time a bill was pulled from a House committee under the method was in 2010, when it was used to advance bills on ethics reform and payday loan reform, said Marc Powers, the chief of staff for House Minority Leader Crystal Quade and a former statehouse reporter.

Meanwhile, familiar concerns resurfaced in opposition to amendments offered by both Rogers and Razer, with lawmakers arguing it could lead to an increase in frivolous lawsuits.

Rep. Adam Schnelting, R-St. Charles, said he wasn’t in support of discrimination, but felt it was something lawmakers had to “proceed very carefully on.” Schnelting said it could be used by employees who decide they’re “going to change and identify as something else” to retaliate against employers and worried it could be “opening a pandora’s box” for lawsuits.

Shira Berkowitz, the communications director for PROMO, a statewide organization that advocates for LGBTQ equality in Missouri, said such lawsuits aren’t an issue currently. Berkowitz pointed to the cases that have made it to the Missouri Supreme Court as evidence that “Supreme Court justices in Missouri, already feel that discrimination cases against sexual orientation and gender identity are wrong.”

In 2019, the Missouri Supreme Court ruled that discrimination against people who don’t conform to stereotypical gender norms is a form of sex discrimination.

Meanwhile, as lawmakers push for debate on MONA, the Missouri House adopted an amendment Wednesday that would bar transgender students from participating on the sports teams that match their gender identity. The underlying bill was tabled before it could be granted initial approval.