Mayor Tishaura Jones Takes a Crack at Closing the Workhouse 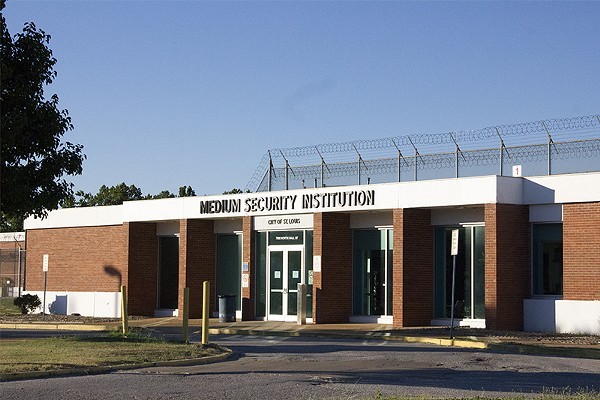 The stubbornly hard-to-kill Workhouse could finally be headed for the end.

Mayor Tishaura Jones, on her first full day in office, proposed a new budget that would wipe out funding for the aging jail.

"I am proud to begin the process of divesting our city from our expensive arrest and incarcerate model, and pledge to shift time, energy and money towards a public safety strategy focused on addressing the root causes of violent crime," Jones said in a written statement.

She cited many of the complaints that activists have lodged against the jail, officially named the Medium Security Institution, for years: inhumane conditions and "a toxic culture of abuse, retaliation and neglect among correctional staff."

In the past, Workhouse lowlights have included reports of guard-sanctioned "gladiator" fights, waves of suicides and roasting summer heat that prompted former Mayor Lyda Krewson to install a temporary air-conditioning system.

But while a succession of city officials have tried various reforms at the notorious jail, inmates and their advocates have long described it as an expensive, dehumanizing hell hole that is beyond saving. A previous bill passed by the Board of Aldermen last year was supposed to wind down operations at the jail by the end of 2020, but it has continued to linger.

Under Jones' proposal, operations would be consolidated at the newer downtown jail, the City Justice Center, and $7.8 million from the Workhouse's budget would be redistributed to help balance the general fund and finance a slate of the mayor's public safety priorities, such as funding for social workers, mental health services and child care to help with inmates' re-entry after they're released.

The plan would eliminate 90 vacant positions and set aside $1.4 million to house inmates at other facilities if the city exceeds the City Justice Center's capacity.

The City Justice Center has its own problems. Inmates have staged a series of revolts in the downtown jail, twice taking over multiple units, smashing windows to the outside world and shouting out complaints about conditions and long-delayed court appearances.

Average stays for people incarcerated in city jails are nearly a year as they await resolution in their cases. The majority of detainees have not been convicted.

The city had begun emptying out the Workhouse, and the number of people locked up in city jails dropped during the pandemic as advocates, public defenders and prosecutors worked to free people as a way to prevent COVID-19 spread. But after the recent uprisings, jail officials said they moved detainees from CJC to the Workhouse while badly damaged units are repaired.

Currently, there are about 900 people incarcerated in city jails, including nearly 200 in the Workhouse.

The Board of Estimate and Apportionment is set to take up the budget proposal at a public budget hearing at 10 a.m. on April 23. People can sign up to comment by emailing board Secretary Stephanie Green at [email protected] or calling 314-622-4245.