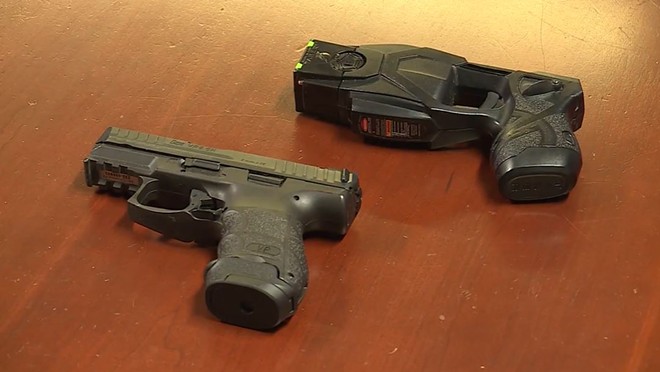 Minnesota police officer Kim Potter pulled her gun instead of a Taser before fatally shooting Daunte Wright on April 11 — and in response, the St. Ann Police Department says it's swapping black Tasers for bright yellow ones in hopes of preventing a similar catastrophe.

Currently, St. Ann officers' standard equipment features a black handgun and a black Taser that bears a resemblance to the sidearm. In an interview with Fox2 on Wednesday, police captain Jason West said the new Tasers "give us an edge to avoid a tragic mistake."

Wright's death, which played out while Minneapolis police officer Derek Chauvin is on trial in the high-profile killing of George Floyd, has reignited scrutiny of the pistol-like design of Tasers and the way officers are trained to deploy lethal or non-lethal force — and, of course, how those variables went so wrong for Brooklyn Center police officer Kim Potter on Sunday.

Body camera footage from the shooting captured Potter, a 26-year-veteran on the force, yelling "Taser! Taser!" before firing a single shot into the chest of the twenty-year-old Wright.

Afterward, Potter could be heard saying, "Holy shit, I just shot him."

On Tuesday, both Potter and the Brooklyn Center police chief resigned. Potter has been charged with second-degree manslaughter.

A similar situation happened locally in the summer of 2019: While chasing a shoplifter in a Schnucks parking lot, Ladue police officer Julia Crews called out a warning that she would deploy her Taser, but instead she pulled out her pistol and shot the suspect in the back.

The alleged shoplifter, Ashley Hall, lived through the shooting and spent months recovering in a hospital. She later sued the city of Ladue in federal court. In October, the city settled the lawsuit, without admitting any wrongdoing, for $2 million.

In an interview with KSDK this week, Hall's lawyer Bill Holland said that his client is "doing better" since the shooting, though he added she had "lost her spleen" as a result of her injuries.

Days after the 2019 shooting, St. Louis County prosecutors charged Crews with second-degree assault, and she later resigned. At the time, her lawyer called the shooting "a tragic accident."

Reached by email on Friday, St. Louis County Police spokeswoman Tracy Panus said the department is not looking to adjust the color of its Tasers, which she described as black with yellow markings. County officers "handle their Tasers daily" in training exercises, she said, and added that "repetition in training is essential in minimizing the risk of these incidents occurring."