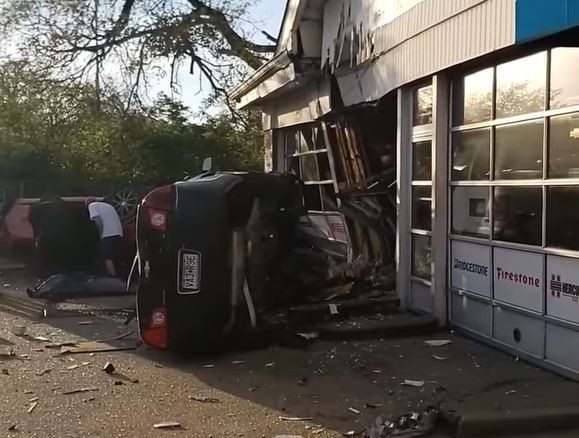 A motorist exiting Interstate 55 in Mehlville on Wednesday evening launched across a median, smashing her car into the front of a mechanic's shop. The crash killed the 57-year-old driver, according to St. Louis County police.

In a news release, the department said that Rhonda Weedman was driving the 2008 Chevrolet Malibu when she exited the interstate around 6:40 p.m. and "struck the median, went airborne over the median into a parking lot, struck two parked motor vehicles, two electric signal boxes, and a building."

In a Facebook video shot during the aftermath by a bystander, the Malibu can be seen tipped on its left side, still smoking, with what appears to be its engine disconnected from the rest of the vehicle.

The video also shows people gathered around a person lying on the ground and trying to render aid. Reached through Facebook, the man who filmed the clip said the person on the ground was the only one hurt in the crash.

A different video of the crash was uploaded to Reddit just hours later. Titled "Driver takes exit ramp WAY too fast," the clip opens from the perspective of a car waiting for a left turn signal at the bottom of the I-55 northbound exit ramp on Union Road near Reavis Barracks Road.

Five seconds later, a dark-colored sedan appears to the right, somewhat close to where the right turning lane is — but instead of turning, the car rockets toward the median and then into the Master Auto Repair shop across the street, the impact sending up a cloud of dust.

No other injuries were reported, though the department says it is still investigating the crash. Anyone with information about the incident can contact investigators at 636-529-8210.