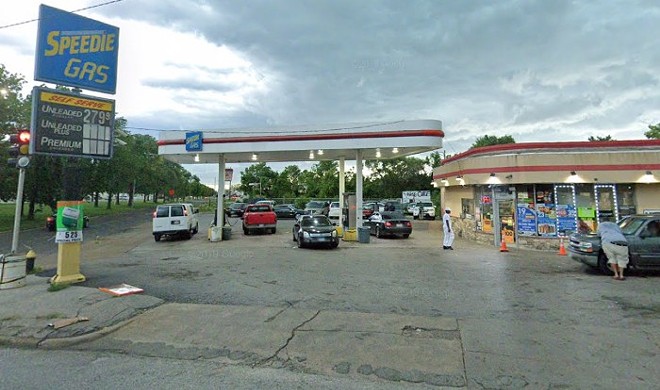 A St. Louis man pursued by police on Monday has died following a violent crash in north city, police say.

Silas Smith, 29, of the 4500 block of Anderson Avenue was parked at the Speedy Gas Station near the intersection of North Broadway and Riverview when he first caught the eye of police.

Members of the police department's SWAT team were patrolling the area shortly after 11 a.m., and they keyed in on Smith, police said, because his Dodge Challenger was parked the wrong way, with the gas tank on the opposite side of the pump. Police cited that and the gas station's history as the scene of gun violence and drug crimes in their justification for targeting Smith.

The SWAT team circled around, and when they passed a second time, Smith drove away, police say.

Up to this point, officers' reasoning for stopping Smith was based on the suspicious parking and location, according to a police summary. Police add that his car had "dark tinted windows and a dark tinted plate cover over a temporary tag," although police don't say if the tags were current.

When officers attempted to stop Smith, he steered the Challenger to the side of the road briefly and then sped away, going south on Broadway where more officers were ready to pop his tires with spike strips, police say.

"Now wanted for felony fleeing, nearby officers observed the suspect vehicle and spiked the vehicle about two blocks south," a police spokeswoman writes in an email.

Smith drove over the spike strips and kept going south. At this point, police were no longer chasing the Challenger on the ground, although a police helicopter began tracking it from above, police say. Another group of SWAT officers set up a second spike strip across Broadway, north of East Taylor Avenue. The Challenger drove over spikes and sped up, running a red light at Broadway and Taylor, police say.

In the intersection, the Challenger slammed into other cars in what turned out out to be a six-vehicle collision. Smith was ejected. Badly injured, he was taken to a hospital where he later died.

Officers recovered a bag of pills from Smith's sweatshirt, along with white powder they suspect to be illegal drugs, police say. They also seized a handgun from the scene. The crash is still under investigation.