The Triumph of Tishaura Jones

On the night she lost her bid for mayor in 2017, Tishaura Jones faced a packed barroom of heartbroken supporters. Four years later, champagne flows into paper cups as campaign manager Rosetta Okohson ascends an outdoor stage to introduce the mayor-elect.

But first, Okohson bridges the two mayoral moments, tying together two destiny-shaping elections separated not just by years, but by citywide protests, hundreds of homicides and an ongoing pandemic.

Okohson had been there on March 7, 2017, to experience Jones' primary loss, initially reported that night as a margin of just 888 votes. (The official tally later showed it was even tighter at 879 votes.) She had watched Jones deliver a concession speech after results showed Lyda Krewson triumphant in a seven-candidate winner-takes-all slugfest with just 32 percent of the vote.

"Let's talk about '888' real quick," Okohson told the election-giddy crowd. "For four years, I have carried that number around with me as a reminder of how close we came."

She stretches out her right arm, showing it to the crowd. "Literally," she says, gesturing at the tattoo inked above her wrist. "It's on my arm."

The number isn't just about the votes or the fact that if not for 2017's ludicrously split election, Jones — who is about to become the city's first Black woman to serve as mayor — would almost certainly be running for a second term. It was also a reminder to Okohson that the coalition of political movements that believed in Jones didn't fold with her loss, but carried through it; and how, in the ensuing years, St. Louis County elected Wesley Bell and St. Louis voters re-elected Kim Gardner and then helped Cori Bush to the U.S. House.

"It was a reminder of an establishment which told us that a movement crying out for reform and recognition could use a dose of humility," Okohson continues, smiling with vindication. "It was a reminder that the work still needs to be done. And for four years, we have done the work." 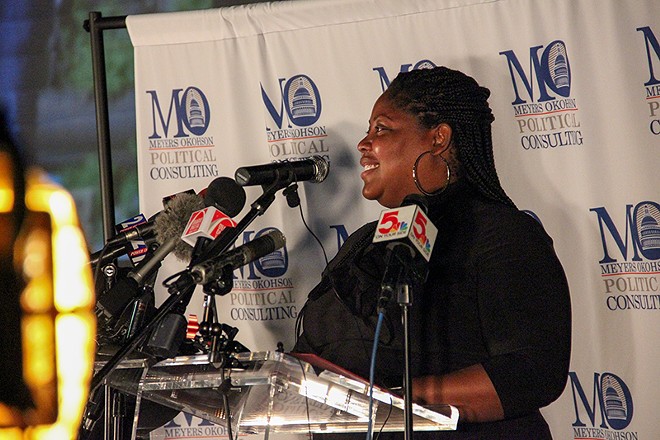 Two hours earlier, the first carloads of Jones supporters had begun arriving for the "drive-in rally" the campaign was hosting in the parking lot of the Omega Center in the Mark Twain neighborhood of north city.

Of course, there are no shoulder-to-shoulder bar crowds, no tipsy canvassers hanging onto each other in exhaustion or sharing hugs as the early absentee results come in — the numbers show Jones in the lead by nearly 1,000 votes.

Seated in the front seat of a parked car, two canvassers, Tashaura Earl and Teresa Jones, watch through the windshield as campaign workers assemble the stage lights for the night's later speeches. They are bursting with excitement. Both women have spent weeks knocking on doors in hopes of electing the city's first Black woman mayor.

"We're making a historical moment," Earl says of the campaign. "I love her initiatives. I'm here for that change, and I'm standing behind her."

Earl's fellow canvasser agreed. Despite the pandemic, St. Louis was engaged with the election. "People still came to the door," Teresa Jones says through the driver-side window. "It was that connection and building relationships — and many more supporters than I'd realized in the southwest."

Indeed, as the results trickle in, it becomes clear that the night is going very much the way it had during the March 2 primary, when Jones decisively won the city's northern wards and came away with victories in the supposed strongholds of Alderwoman Cara Spencer. In the primary, voters were instructed for the first time ever to approve "as many" candidates on the ballot as they wished, resulting in Jones coming in first and Spencer second.

But the general election is a classic head-to-head. Only one candidate can be mayor. Unlike November, this election wouldn't yield days of controversy or recounts — the math was clear. Around 9:20 p.m., the Board of Election releases another batch of numbers, and the impact ripples into the modest crowd loitering near the line of TV cameras. In a flash, the supporters rush from their cars to celebrate, dancing, but not touching, as pop music booms across the parking lot.

Four years ago, Jones' election-night hopes ended with a line of reporters asking her somber questions about what the defeat meant for her political future. Tonight, as she takes the stage, she faces a crowd chanting her name — and a city getting ready to meet its new mayor.

After moving through thank yous to her family and her campaign team, Jones invokes the poetry of one of St. Louis' greatest Black women, Maya Angelou.
The crowd knows the words, and their voices echo the immortal stanzas:

"You may write me down in history/With your bitter, twisted lies/You may trod me in the very dirt/But still, like dust, I'll rise."

"St. Louis," Jones continues, "This is an opportunity for us to rise. I told you when I was running that we are done avoiding tough conversations. We are done ignoring the racism that has held our city and our region back. I made the same case four years ago and came up short. But I made peace with the fact that I would rather lose another election than to stop having the tough conversations in every corner of our city."

That means not "staying silent" when she spots homophobia, transphobia, xenophobia or religious intolerance, she says. Invoking Dr. Martin Luther King Jr., who was assassinated on Easter Sunday 53 years ago, she promises, "I will not stay silent when I spot any injustice. Injustice anywhere is a threat to justice ..."

The crowd interjects, finishing King's famous quote for her, "... everywhere."

A multitude of injustices are waiting for St. Louis' mayor, though she'll have a half-billion dollars to aid her efforts to target them. Two jails are in crisis, with the City Justice Center the site of repeated uprisings and the maligned Workhouse still housing inmates in its crumbling walls. She'll have a new public safety director to hire, a homicide spike to confront, a school system to stabilize, tax incentives to distribute equitably and a pandemic that could still upend everything with the potential for COVID-19 variants to trigger a new outbreak.

But tonight, the arc of St. Louis' political universe traces a fitting path, from Jones' devastating loss to a dominant win. It was a story four years in the making. Jones waited. Her supporters believed. And in the end, St. Louis finally rose to meet her.