Under a Short-Lived Committee, Some Businesses Jumped Ahead in Missouri Vaccine Line 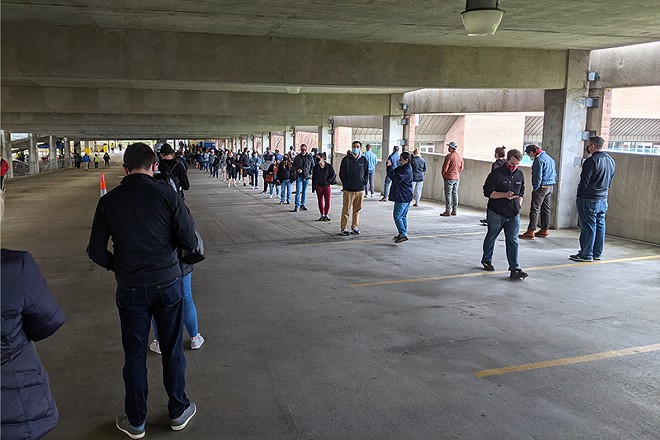 In the span of 10 minutes in late February, a panel of state officials signed off on nearly 1,300 people skipping ahead in Missouri’s COVID-19 vaccination line to receive a shot sooner.

About 25 minutes later, another 325 were elevated.

It all happened during the first of five meetings of the Missouri Vaccine Priority Phase Advisory Committee, as the group of bureaucrats methodically worked through a list of applicants who were requesting their businesses jump to a higher tier than what the state originally placed them in.

That was, in part, because the committee quickly became obsolete as Gov. Mike Parson announced the activation of subsequent tiers sooner than anticipated — making many of the applications moot by the time the committee met to consider them.

Through an open records request, The Independent obtained applications and decision letters for 88 organizations that had been submitted for the committee’s consideration. Of the 88 that had been received through mid-March, at least 17 received letters approving their move to a higher tier and 70 were denied. A corresponding decision letter was not provided for one application.

Of those approved, most were large healthcare and pharmaceutical corporations, like Centene and Mallinckrodt Pharmaceuticals, in addition to the St. Louis Convention and Visitors Commission and libraries.

The remaining submissions, which spanned public school systems, universities, grocery store chains, hotels and a hair salon, were told they’d have to wait their turn.

The applications give insight into some industries’ frustrations with the tier they were placed in, as well as desperate pleas by small business owners trying to protect their employees and customers.

“I believe that in order to protect not only ourselves, but also our clients a higher phase is needed for our industry and small businesses to make it through this,” wrote the owner of a small hair salon in St. Louis. “We will be able to be a safer establishment, advocates for the vaccine and it will help our stylists start returning to their normal pay checks as well.”

Formed through an emergency rule filed in early February, the nine-member committee was led by Robert Knodell, Parson’s deputy chief of staff, and made up of representatives from eight state agencies, including the departments of agriculture, conservation, economic development, health, labor, natural resources, public safety and transportation.

The committee’s meetings followed a pattern, efficiently working through a list of applications received and voting on whether the organization met definitions for the requested tier outlined in the state’s health order.

Industry sectors were based on the Cybersecurity and Infrastructure Security Agency’s guidelines.

After the committee issued a recommendation, Randall Williams, the director of the Department of Health and Senior Services, had five business days to issue a final written decision.

The redundancy of the committee became apparent at its first meeting on Feb. 25, when it convened less than an hour after Parson announced that teachers, grocery store workers and other critical infrastructure sectors would be eligible to receive the vaccine starting March 15 under Phase 1B Tier 3.

“So some of these decisions for some of these groups — they will find themselves in an eligible tier potentially by March the 15th if they are not in one already,” Knodell said during the meeting.

That meant groups who made formal requests, like the St. Louis and Kansas City school districts and grocery store chains like Aldi and Schnucks, remained in their original tier.

A similar situation played out a week later, when Knodell recommended any additional organizations requesting to be moved from Tier 3 of Phase 1B to Tier 2 be tabled, since Tier 3 would be opening in 11 days.

“And my concern is the amount of time that it would take for Dr. Williams to adjudicate those requests, we would already be in the eligible tier for those entities,” Knodell said. “And certainly, even if he was able to act on that sooner, by the time they could plan vaccinations for their employees we would be there anyway.”

The emergency rule that established the committee outlined it would expire Aug. 23. But the committee recommended at its last meeting on March 25 that it be suspended with the final phases of the state’s tiers opening soon.

A majority of the approvals went to pharmaceutical and healthcare companies that were elevated to Tier 3 of Phase 1B. That meant upon William’s approval, their employees were immediately eligible for a vaccine instead of having to wait several weeks.

Some companies requested just a portion of employees be prioritized, like seven employees in eResearchTechnology Inc.’s St. Louis County office who must work in-person to process data for clinical trials.

Home State Health, a subsidiary of Centene Corporation that operates a managed health care plan through Missouri’s Medicaid program, requested the change for between 500 to 1,000 of its frontline staff — about 10 to 15 percent of its entire workforce — who could not work remotely processing paper health claims, managing call centers and more.

Despite questions about Centene’s role as mainly a claims processing unit as opposed to a pharmaceutical production company, Adam Crumbliss, the director of DHSS’ Division of Community and Public Health, said during a committee meeting that they were essential as “the key infrastructure for continuing the movement of the Medicaid managed care infrastructure.”

Another industry that was bumped up was libraries, after the committee recommended they be classified under Phase 2.

“Dr. Williams modified the health order following the first committee meeting,” said Lisa Cox, a spokeswoman for DHSS. “That decision was to avoid all other libraries in the state being forced to apply for consideration by the committee.”

Other approvals ranged from the St. Louis Convention and Visitors Commission, a political subdivision of the state that operates the America’s Center Convention Complex, to Applied Learning Processes, a center that works with students with severe learning disabilities in Kansas City, to the Olin Corporation, a manufacturing company that makes chemicals like chlorine used in municipal water treatment.

Meanwhile, some industries were less fortunate — with higher education institutions expressing frustration they were in a later tier than K-12 education.

Because staff is exposed in classrooms for prolonged periods, “there should be no difference in phases between K-12 and higher education,” wrote Darby Gough, the assistant vice president of student development and success at Avila University, a private Catholic university in Kansas City.

Similarly, the Kansas City Chapter, AGC of the The Builders’ Association, said it seemed counterintuitive that emergency orders at the start of the pandemic included construction as a critical sector, but that the industry received no mention in vaccine priority tiers.

“We were told to keep projects moving (which kept many people off the unemployment rolls), but now have been left out during the recovery phases,” wrote Allen Dillingham, the group’s director of government relations. “This is not right.”

Many of the submissions highlighted the economic impact businesses had on their areas, and the roles they played in helping end the pandemic — like Drury Hotels housing healthcare workers and National Guard members.

And others stressed that despite following best practices, COVID outbreaks were hard to control.

St. Louis Public Schools had been teaching in-person since October, but “quarantines are crippling our ability to continue in the classroom,” wrote Jayme Major, the assistant general counsel for the district.

“Large numbers of quarantines have brought us to the brink of returning to all-virtual at some schools,” Major wrote, later adding: “In addition, teacher fear and exhaustion has led to call-ins, and teachers opting to take long-term unpaid leave or resign.”

“To date, 252 (Bi-State Development) employees have tested positive for COVID-19, and two employees have succumbed to this terrible illness,” wrote Jessica Mefford-Miller, Metro’s executive director. “The constant impact of this virus on our workforce makes continuing to provide this essential service a daily challenge.”

The owner of a locally-owned running store in St. Louis described how both he and his wife had health issues and were the main employees that kept the store afloat.

“We work the store. We interact on a daily basis with customers. If one of us gets covid it will really hurt our business as we can’t then operate under our normal hours. We are the only two, but we do (have) a person that helps us on Saturdays but who has other jobs,” the owner wrote, later adding: “I am 64 she turns 60 in March. Can we get moved up in the vaccine priority please?”

Their request was denied.