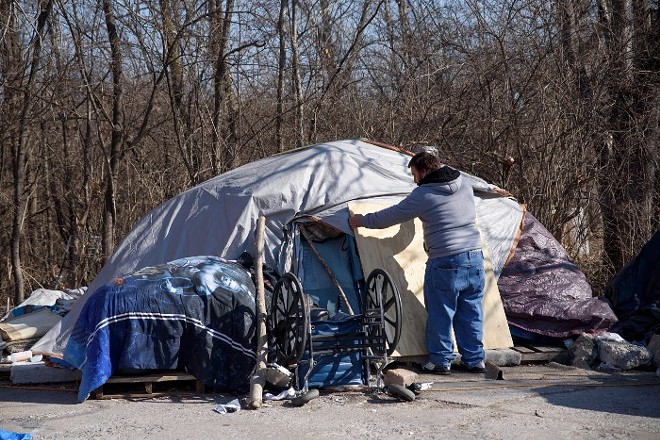 Homelessness rose through 2020, according to the federal Department of Housing and Urban Development's annual assessment.

Peter and Paul Community Services, which operates a shelter and transitional housing in St. Louis, affirms that it's feeling the increase within its facilities, exacerbated by the ongoing effects of the pandemic.

The study found that the surge is due to an increase of unsheltered and chronically homeless individuals, and that people of color are overrepresented among these statistics.

During the past four years, HUD reports, homelessness has been on the rise, resulting in a 2.2 percent increase in 2020 from the year before.

“Unfortunately, it’s not a surprise,” says Adam Pearson of Peter and Paul Community Services, a facility that offers housing and resources to unhoused people in the St. Louis area.

“Looking at the past few years, there has not been enough investment in affordable housing,” he says.

The influx of unhoused individuals has hit especially hard at Peter and Paul’s emergency shelter in Soulard. The location is a congregate shelter, meaning that it’s one large room with bunk beds. That makes it harder to keep social distance in the space. In pre-COVID times, 60 men could sleep at the shelter every night. Now, they’ve had to reduce capacity to twenty, despite the increase in demand. Some nights, Pearson says, shelter staff has to turn people away.

On a typical day prior to the pandemic, the doors to Peter and Paul's emergency shelter would open at dinner time, and a flood of 60 visitors would make themselves at home for the night. Some would settle into their bunks. Others watched TV, played games or used the computer lab to work on resumes or apply for jobs. Dinner would be served, and guests would have an opportunity to work with case managers. In the morning, a continental breakfast would be served before the men would head out for the day.

Today, however, the shelter must enforce capacity limits and social distancing. It gives the unhoused community a much more individual experience for the duration of their stay but cuts down on the number of people served.

The Soulard emergency shelter is one of three Peter and Paul locations that have been forced to adapt to the new normal.

“Overnight, all of our housing and shelter programs had to be modified a bit,” Pearson says.

After the initial 2020 lockdown, Peter and Paul had their own internal lockdown across all its programs. Garfield Place Apartments, its residential program that houses residents with severe and persistent mental illness, is under the same regulations as the rest of the city and has scaled back some of their group programs to a more one-on-one approach.

Their emergency shelter is also now open all day, so that unhoused individuals didn’t have to leave “if they didn’t feel safe going out into the community,” explains Pearson.

“We’re very much looking forward to more and more people getting vaccinated and things getting a little bit more normalized in 2021,” he says.

Despite seeing an increase of people showing up at their emergency shelter, Peter and Paul has actually seen a decrease in visitors to their food services. Their meal program, located in Soulard, serves meals twenty days per month.

The HUD assessment found that family homelessness remained steady from 2019 to 2020, and 90 percent of families with children were sheltered. Most of the support Peter and Paul provide to unhoused families and couples was through this meal service.

“One of the unexpected outcomes of the pandemic is that other [meal] services have popped up,” explains Pearson, which has “helped fill the gap and meet the need.”

With more meal programs established around St. Louis and St. Louis County, individuals and families have had to travel less to receive a hot meal. This, Pearson believes, is one beneficial consequence of the pandemic.

HUD’s study also outlines the potential effects of President Biden’s American Rescue Plan Act, which was signed into law in March. The plan provides $21.5 million rental assistance, as well as allocating emergency funds to states to help their residents obtain stable housing. The plan was followed by an announcement by the Centers for Disease Control and Prevention that extends a federal moratorium on evictions. But the moratorium won't keep everyone in their homes. St. Louis County announced plans to restart evictions this week, working through a backlog of nearly 600 cases.

Pearson believes the federal aid plan will “absolutely” help to combat the rising homelessness. A portion of the funds, he hopes, will reach those on the cusp of losing their homes to make sure that shelters and other resources do not get overcrowded.

“A lot of this fund can go towards making sure people stay in housing,” he says, “There’s going to be space in there to get shelters more permanent housing programs, funding to increase the number of beds, increase staffing, increase programming.”

According to Pearson, homelessness in St. Louis is a solvable problem. With only about 1,200 individuals unsheltered on a given day, he remains hopeful that with the right resources, St. Louis’ future may be much brighter for a vulnerable population.

“There’s been so much more collaboration that I’ve seen this past year than at most other points,” he says. “There’s broad interest, broad passion, and intense engagement in solving these problems.”

While the information outlined in the new HUD assessment seems dismal, Pearson finds a silver lining. Among the visitors of the emergency shelter, eighteen found permanent housing in 2020.

“There’s a passion in the city to addressing these issues, and I’m glad Peter and Paul is playing a big role in that,” Pearson adds.