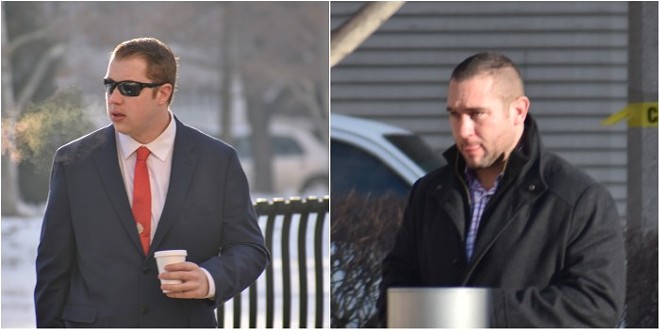 Two white former St. Louis cops will face another trial in the beating of an undercover Black detective, whom they thought was a protester.

Prosecutors from the U.S. Attorney's Office will retry Dustin Boone on a charge of depriving Det. Luther Hall of his civil rights and Christopher Myers, who is accused of destruction of property — Hall's phone — according to court documents filed today.

The two were part of a five-defendant case. Two now-former officers, Randy Hays and Bailey Colletta, have already pleaded guilty. Officer Steven Korte, who Hays testified kicked Hall in the face, was acquitted last month of both charges against him. Korte cannot be retried.

But jurors deadlocked on Boone, and though they acquitted Myers of depriving Hall of his civil rights, they couldn't reach a decision on the busted phone.

The new trial is set to begin on June 7.

Hall was embedded with protesters on September 17, 2017, after ex-cop Jason Stockley was acquitted of murder in the 2011 killing of Anthony Lamar Smith and marchers filled the streets. That night, police clashed with protesters downtown, sweeping up more than 120 in mass arrests.

Hall and his partner Louis Naes were both arrested. But while the arrest of Naes, who is white, was routine, officers dressed in heavy armor pummeled Hall. He later told investigators they "beat the fuck out of him like Rodney King."

Hays admitted to clubbing Hall with a baton even though the detective was on the ground and posed no threat. Prosecutors claim Myers then smashed a phone Hall had been using to record that night. Defense attorneys for Boone, Myers and Korte didn't dispute that Hall was beaten, but they claimed their clients weren't involved.

Prosecutors pointed to text messages from Boone and Myers in the lead up to the attack in which the gleefully talked about the prospect of beating protesters.

“Let’s whoop some ass,” Myers wrote in texts recovered by the FBI.

In one of his texts, Boone wrote, "It’s going to be fun beating the hell out of these shitheads once the sun goes down and nobody can tell us apart … Just fuck people up when they don’t act right!”

Hays and Boone traded texts after they learned that one of the people arrested was an undercover police officer.

"I'd just like to apologize to the man before someone gets in his ear and true to turn this into something more than it was," Hays wrote on Sept. 22, 2017, five days after the beating.

Boone replied, "EXACTLY! That's my biggest fear now that it's getting around. Somebody puts money or race in his ear and he listens for some reason and it's over before we get to say a word."