By Champe Barton, The Trace

This story was published in partnership with The Trace, a nonprofit newsroom covering gun violence in the U.S.

The St. Louis Civilian Oversight Board was founded in 2015 as a check on police power in the wake of the fatal shooting of Michael Brown in Ferguson. But despite more than 50 police shootings in the city over the last five years, the police department hasn’t provided the board materials to review a single case.

As a result, the oversight board has been unable to fulfill one of its most critical responsibilities, and the one that precipitated its founding: to prevent the department from mishandling investigations of police violence.

“In five years' time, we’ve got nothing,” said Kimberley Taylor-Riley, the board’s commissioner. The delay in concluding investigations, she continued, “has completely thwarted [the board’s] process.”

The city’s April 6 mayoral election has the potential to unstop the civilian review pipeline, according to activists interviewed for this story. Current Mayor Lyda Krewson has chosen not to run for reelection, and both of her potential successors — Alderwoman Cara Spencer and city Treasurer Tishaura Jones — have promised ambitious criminal justice reforms. Whoever wins the election will have the chance to appoint a new director of the Department of Public Safety, which oversees both the Civilian Oversight Board and the police department.

John Chasnoff, who co-founded Coalition Against Police Crimes and Repression, a local police accountability nonprofit, said that new leadership “is more likely to make change than anything else.” He added that the mayor could help shepherd amendments to the Civilian Oversight Board’s founding ordinance through the Board of Aldermen. He and other activists in the city have argued that housing the Civilian Oversight Board and the police department under the same city agency creates conflicts of interest.

In response to questions about how she will address the city’s civilian review process, a spokesperson for Spencer’s campaign shared a press release detailing her police reform plan. The plan does not specifically address the delayed police shooting investigations but notes that the city’s civilian review process “will be reviewed for further actions and increased accountability and effectiveness.”

A spokesperson for Jones’s campaign said they were aware of the delays at the police department and said that all shootings involving the department “need to be investigated by independent teams of investigators.” They added that the department’s internal affairs division has exploited a loophole in the ordinance that established the Civilian Oversight Board to avoid sharing hundreds of civilian complaints with the board. “With a Mayor and a Director of Public Safety dedicated to accountability and transparency, we can remedy this issue and give COB the power and resources to do their jobs,” the spokesperson said. 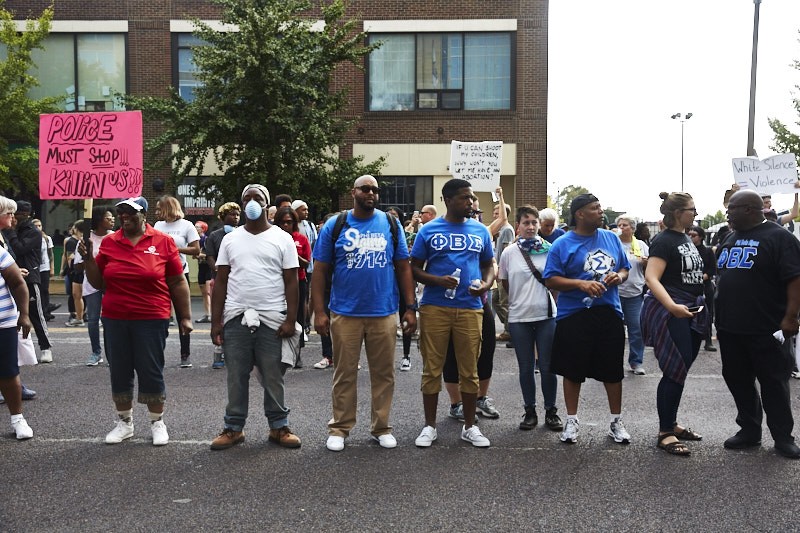 The St. Louis Metropolitan Police Department leads the nation in killings by officers. An analysis conducted by ArchCity Defenders, a legal advocacy nonprofit, found that the department contributed to 18 deaths per million residents, roughly four times the rate of police killings in cities like Chicago and Los Angeles. The vast majority of these killings happen by gunfire. Since 2015, St. Louis police have fatally shot 27 residents — 22 of whom were Black — and injured many others, according to police shooting data from The Washington Post and Fatal Encounters. According to the department, St. Louis police opened investigations into 55 officer-involved shootings between 2015 and the end of 2020.

The Civilian Oversight Board is supposed to provide a check on this violence. The seven-member board is composed of mayoral appointees who have been confirmed by the city’s Board of Aldermen. In addition to investigating civilian complaints and reviewing internal affairs reports of officer misconduct, the board has a specific responsibility to review the police department’s internal investigations of officer-involved shootings. If it determines that an investigation was not conducted thoroughly, the board has legal authority to order police to gather additional evidence, or it can send an independent team of investigators to collect it. Once the board is satisfied with its findings, it can issue recommendations to the police chief about changes the department should make to prevent future shootings and can make its findings public so that community residents are aware of department misconduct.

But a lengthy and convoluted internal review process — clogged by infighting between the police department and the city’s circuit attorney — has prevented the board from reviewing any shootings, leaving many city residents who’ve had loved ones killed or injured by police violence uncertain about whether officers had exhausted all necessary options before using force.

“When the process isn’t transparent, it leaves a wound that will remain open because you don’t feel like everything was done fairly,” said Carlos Ball, the brother of Cary Ball, who was killed by St. Louis police in 2013. Cary had finished a shift in the laundry room of Mercy Hospital St. Louis and was driving a colleague home when police stopped his car. Cary fled on foot, and after a short pursuit, officers shot Cary 21 times. Officers claimed he had pointed a Glock pistol in their direction. But civilian witnesses disputed this characterization; at least one said Cary was tossing the gun away when police opened fire. 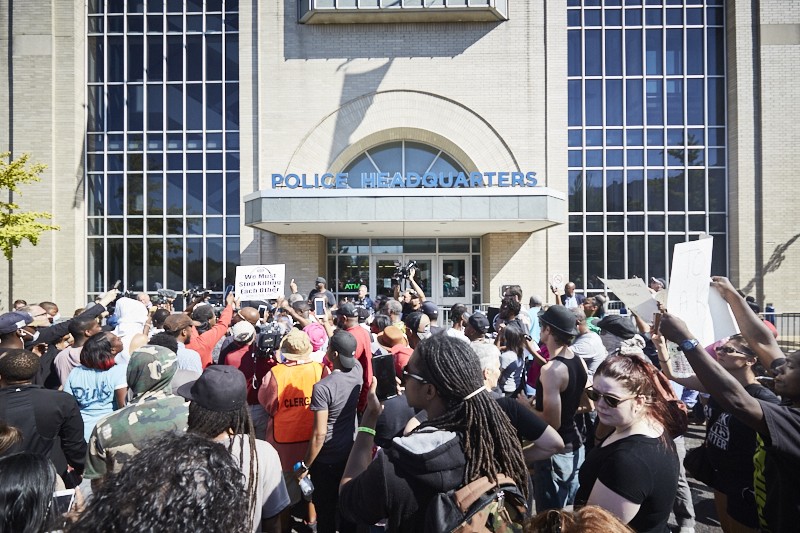 The process the St. Louis Metropolitan Police Department currently follows to investigate police shootings was a direct outgrowth of a community outcry for greater accountability following the killing of Michael Brown. In the months following Brown’s death, the department established a special division to investigate officer shootings called the Force Investigation Unit, and the Board of Aldermen agreed to create the Civilian Oversight Board so that internal investigations could be reviewed by an independent agency.

The investigative process the department settled on, though, is — in Taylor-Riley’s words — “clear as mud.”

Immediately after an officer shoots a civilian in the line of duty, the Force Investigation Unit responds to the scene to examine evidence and interview witnesses. It conducts an investigation to determine whether the officer acted criminally and then sends its findings to the Circuit Attorney’s Office so that the circuit attorney can decide whether to bring charges.

If no criminal charges are filed, the Force Investigation Unit’s report is sent to the department’s internal affairs division. Internal affairs investigators then conduct their own investigation to determine whether the officer violated department protocols and send their findings to a congregation of high-ranking police officials within the department called the Deadly Force Tactical Review Board, which is charged with deciding whether the investigative findings warrant any changes to department procedure.

Next, the Deadly Force Tactical Review Board’s recommendation is shared with the police chief. Only then would the findings collected throughout the process be shared with the Civilian Oversight Board for review.

Taylor-Riley and others familiar with the process said that though the system is designed to incorporate many checks on the department’s conduct, it is failing to produce the transparency it was designed to provide. Specifically, they pointed to the handoff between the Force Investigation Unit and the Circuit Attorney’s Office as the point where cases are getting hung up but were otherwise uncertain about what was causing the delays.

In public back-and-forths, the agencies have traded broadsides about who is more to blame. The police have implied that the current circuit attorney, Kim Gardner, and her predecessors have dragged their feet about whether to file criminal charges in each case. Gardner’s office has countered that the reports provided to her office are often inadequate, telling the St. Louis Post-Dispatch in 2017 that the police department had intentionally withheld evidence in 25 then-pending police shooting cases.

Emanuel Powell, a lawyer at ArchCity Defenders, has seen some of the department’s internal investigative reports through his work representing clients in civil suits against St. Louis police over fatal shootings. He said the internal reports show clearly that officers are abiding by a “code of silence” about fellow officers’ possible misconduct. 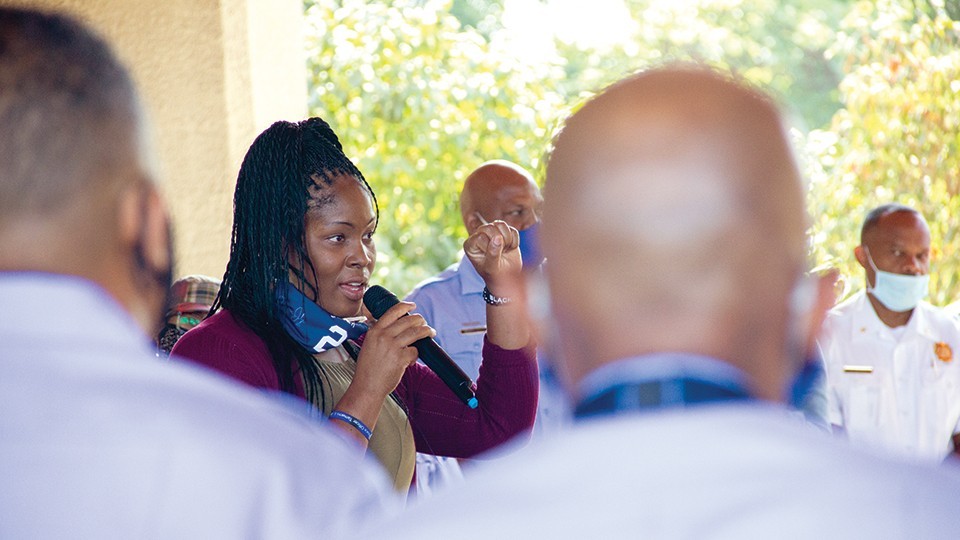 Heather Taylor, a former homicide detective for the St. Louis Metropolitan Police Department and a spokesperson for the Ethical Society of Police, a group of current and former law enforcement employees dedicated to addressing racism at SLMPD, said that these allegations don’t surprise her. She repeatedly referred to the lethargy of the department’s investigative process as “intentional” — part of a broader desire by the department and the local Police Officers Association to undermine the goals of the Civilian Oversight Board. Both the department and the Police Officers Association, the union for officers, opposed the formation of the board when the bill was passing through the Board of Aldermen.

Taylor, who retired from the force in 2020, noted that the Circuit Attorney’s Office also has a share of the blame and said that after the new police chief, John Hayden, completely replaced the staff of the Force Investigation Unit in 2018, the quality of its investigations improved. But, she added, “it’s just asinine that [the reports are taking so long to get to the Civilian Oversight Board.] It’s ineffective, and it hurts the relationship between the community and the police — they don’t trust us, and rightfully so.”

Correction: A previous version of this article incorrectly stated the number of people fatally shot by the St. Louis police since 2015. The correct number is 27, 22 of whom were Black.