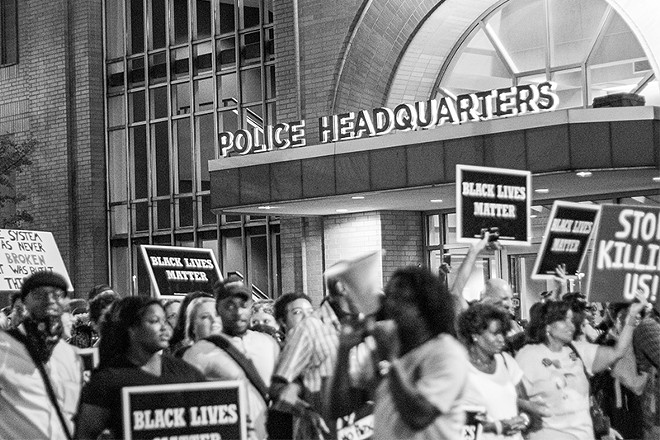 The criminal trial against three St. Louis cops charged in the beating of a Black undercover detective ended Monday in two acquittals and a deadlock, but it won't be the last reckoning for the events of September 17, 2017.

"It wasn't a mixed verdict; it was a total win for the people who admitted to beating a Black police officer," says attorney Javad Khazaeli, who sat through much of the trial during the past two weeks, a time in which he took a keen observation of the line of police officers called to testify about what they saw when their colleagues beat and arrested Luther Hall.

Khazaeli's interest in the case stems from an already two-year-old lawsuit filed on behalf of a dozen people also arrested on the night of September 17. Only, their arrests took place a few blocks away and hours later, when dozens of officers in body armor surrounded a mixed group of protesters and residents, forming a "kettle" at Washington Avenue and Tucker Boulevard.

The tactic effectively trapped about 100 people in place — at which point the assembled officers closed ranks around them, arresting everyone in a spree of beatings and pepper spray.

In 2019, Khazaeli's firm, Khazaeli Wyrsch LLC, filed a class-action lawsuit against the city while naming nearly 350 officers who allegedly participated in the kettle operation. In an interview with RFT at the time, he'd noted that officers took "extraordinary measures" to hide their identities that night.

Two years later, the lack of badges and name tags played to the defense's favor in the federal trial of the officers charged with beating Hall: Attorneys for St. Louis cops Dustin Boone, Christopher Myers and Steven Korte each argued that while their clients were in the area of Hall's beating, they were not the ones who committed the crime of deprivation of rights — suggesting that the true culprits were other, as-yet-unidentified cops.

To Khazaeli, the argument was absurd — he points to the video footage from Hall's phone which captured Myers' face just before the phone was turned off, in addition to the reams of text messages showing the officers' attempts at damage control after the news broke of the beating.

"What makes me so disheartened," he says, "is for last two-and-half years, we have been sharing with the city of St. Louis, and the FBI, videos from two hours later where other officers are beating citizens, and in our videos, we have 100 percent identified the officers."

And yet, to date, Hall's is the only beating to result in charges against the officers.

However, while the civil case is still winding its way through the legal system — Khazaeli blames Mayor Lyda Krewson's administration for creating delays and "doing everything in their power to push the buck to the next mayor" — he says he came away from the Hall trial with some causes for confidence.

For one thing, while the accused officers in Hall's beating had the benefit of a lack of video evidence during a key stretch of the incident, the mass arrest later that night was heavily documented by those caught in the kettle.

"In our case, we have piles of video evidence," Khazaeli says. "It cost us tens of thousands of dollars, but we've identified almost every single officer on the scene, and most of the cops who have used force."

"Eventually," he adds, "St. Louis taxpayers are going to refund that money."

That remains to be seen, though St. Louis has already paid out a reported $5 million settlement to Hall, who suffered long-term injuries to his back and pancreas as a result of the fists, sticks and boots crashing into his body.

Similar brutality was described in more than a dozen lawsuits filed by people caught in the kettle that night, including allegations that officers targeted people with cameras and tried to destroy cell phones — just as Hall's phone and camera had been smashed in his arrest.

Also like Hall, the arrests cops made that night during the kettle did not turn into any actual criminal charges: While 123 people initially faced charges for "failure to disperse," the city allowed the one-year deadline for the statute of limitations to pass without taking action.