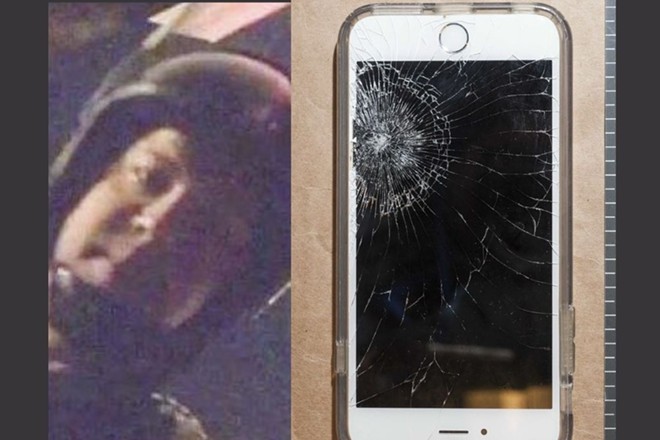 The looming face of a helmeted St. Louis police officer in riot gear is the final, chilling image of the video captured by Luther Hall, a Black detective whose undercover assignment on September 17, 2017 ended in a beating at the hands of other cops.

The roughly four-minute video was entered into evidence in this week's criminal trial against two current St. Louis cops, Dustin Boone and Steven Korte, and a third officer, Christopher Myers, who is no longer on the force. It is Myers's face, Hall and prosecutors say, which appears in the final frames of the video as officers threw Hall to the ground and beat him bloody.

All three officers are charged in federal court with deprivation of rights under color of law, while Myers is facing an additional charge of destruction of evidence for smashing Hall's cellphone. At trial Thursday, Hall pointed to the circular pattern of smashed glass and said he believed Myers had used a baton to smash the front of his phone — which Myers and his attorney deny.

Hall's encounter with several members of the city police's Civil Disobedience Team — a team that would also arrest more than 100 civilians that night in a brutal mass arrest strategy known as a "kettle" — begins in the above video around 3:19 mark, shortly after Hall and other protesters are seen running from the advancing column of armored officers.

The video also shows Hall had only just arrived in a space between a portable generator and electrical box before he was confronted by the officers. On Wednesday, defense attorneys accused Hall of "hiding" in that space and refusing officers' orders, though photo and video footage appears to show Hall being attacked almost immediately.

"I remember being told to put my hands behind my back, but I couldn’t move my hands because they were standing on my arms and my hands," Hall testified on Thursday.

"It was a free for all," he added. "I could feel nothing but boots, fists and sticks striking my body."

Hall later required multiple procedures to close a hole in his lip, and injuries to his jaw prevented him from eating solid food for weeks, leading to him losing more than 20 pounds. He later underwent spinal surgery, though he says he still lives with chronic pain and other medical condition from damage to his internal organs.

Two former St. Louis officers, Randy Hays and Bailey Colletta, have already pleaded guilty to federal charges related to the incident. Hays is expected to testify for the prosecution against his former partners. The trial continues Friday with more testimony from Hall and other witnesses.