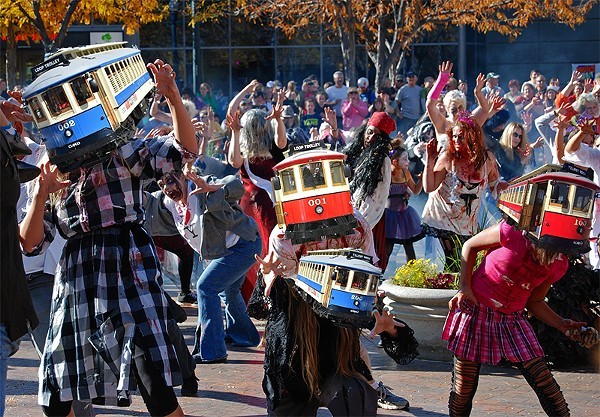 Ah, March. A time of rebirth, of jubilation, as the temperatures rise and the sun sticks around just a little longer, enveloping us all in its warm embrace. It would be beautiful; it could be serene — if not for the madness.

No, we're not talking about basketball. The March Madness to which we refer has nothing to do with a ball or hoop. We're referring to the unbridled rage you feel, to the point that your blood is boiling beneath your skin and threatening to pop through the surface of your veins in a sudden, high-intensity burst. Your fury is so great that your blood pressure medication can't even make a dent, and yet you cannot put a finger on what it is, specifically, that you are furious about. But fear not: We're here to help.

Welcome back to the Big Mad, RFT's weekly roundup of righteous rage. No longer will you need to wonder why you are an absolutely apoplectic asshole all the time; simply take that fury, ascribe it to any or all of the bite-sized bits of bile below, and you'll finally have a plausible explanation for why no one you know can stand to be around you anymore. Simple! Let's dive in.

Grab 'em by the manhood: The Missouri House of Representatives, having conquered all of the state's more pressing woes [EDITOR'S NOTE: FACT-CHECK THIS] is forgoing a victory lap to instead roll up their sleeves and take a crack at the larger ills of society — namely, the sheer lack of manliness in our population. Some estimate that as many as half the people who live in the state of Missouri do not identify as manly men interested in the noble pursuits of manliness — far too many for Clay County Rep. Doug Richey, who late last month introduced House Resolution 288, formally instating a "Missouri Manhood Challenge" for the state's population. The language of the resolution calls for the "exemplary men" of Missouri to be commended for their "vigorous manhood," in what, despite all appearances, more or less amounts to a Boy Scout oath and not a celebration of Missouri's best penises (if it were the latter that whole "Show Me State" motto would take a concerning turn). Kudos to the Missouri House for affixing the legislative equivalent of a pair of truck nuts onto our state, for some reason! Now, can St. Louis have some goddamn vaccines please?

Dawn of the trolley: 2020 brought a whole lot of awful shit into our lives, but if there's one thing it (mercifully) was light on, it was Loop Trolley news. Fret not, insatiable trolley fans (all six of you) — your favorite transportation boondoggle is back, and ready for the public to deposit more money into its bottomless coffers! As reported by the St. Louis Post-Dispatch, backers of the rolling unmitigated failure have submitted a request to the East-West Gateway Council of Governments, which oversees the disbursement of federal transportation money in the St. Louis area, for a scant $1.26 million dollars to keep on clanging down the line. It's mere pennies compared to the $33.9 million in federal funds already gobbled up, and if the Sunk Cost Fallacy has taught us anything, it's that things are bound to turn around if we just put a liiiiittle more money in. Here's hoping the trolley's board of directors get what they're asking for — after all, these parked cars ain't gonna hit themselves.

Come on, sheeple: It’s amazing what can be accomplished by little more than decades of anti-vaccine griftwork and a president who treated COVID-19 like a nightclub bouncer who could be bought with a couple wadded-up fives: A recent poll, conducted in the past month of vaccine rollouts, suggests that around 25 percent of Missourians would reject a coronavirus vaccine even if available. That doesn’t mean they’re waiting to see if the shot makes people grow forehead tentacles or uncontrollably burp the Windows XP startup theme — they are simply “not interested.” This is deeply bad news for all of us, including Governor Mike Parson, who acknowledged, “Some Missourians are less interested in receiving a vaccine than others.” That must sound rich to the St. Louisans who are driving hours to rural distribution sites for a chance at a shot — while at the same time the “Plandemic” crowd refreshes their YouTube comment sections to see if “PatriotSKULLBONERZ1776” has any new insights on immunology.

America, meet Jeff Roorda: On March 14, CBS’ 60 Minutes introduced a national audience to St. Louis’ police union spokesman, Jeff Roorda. While the segment effectively presented Roorda’s opposition to Circuit Attorney Kim Gardner, his response to a question about St. Louis police shootings stood out like a rotten apple: "We don't shoot," his explanation began. "We shoot back." So, yes, that sounds like a benign tough-guy response, but it’s deeply revealing of Roorda's commitment to the idiocy of the “War on Cops.” It’s more than just the fact that Roorda is wrong — just to name a few, in the police killings of Anthony Lamar Smith, Kajieme Powell, and Mansur Ball-Bey, it was the cops who shot first — but his refusal to accept a more complex world than "cops good, criminals bad" is actually terrible for everyone, cops included. In the real world, police shootings are the product of complex interactions, tragedies that, even if ruled “justified,” traumatize officers and devastate community trust. St. Louis voters just approved two mayoral candidates whose public safety platforms feature new strategies based on the notion that an armed cop isn’t always the best tool for an emergency. And yet, we still have Roorda, who never seems to miss a chance to prove himself the biggest tool of them all.