The Miracle and Mystery of Gov. Parson's Clemency Campaign

The group also included Columbia attorney Jennifer Bukowksy, who tells the RFT that they had sought the meeting "to encourage the governor to take advantage of the pardon power" and push him "to not neglect it as some predecessors have done."

But the meeting appears to have produced more than just a general discussion about clemency strategy and the group photo with Parson that Bukowsky later posted to Facebook: It was also a moment when the governor was told about Dionysus Soubasis, a prisoner serving a 30-year sentence for a non-violent drug crime.

"He just happened to be one of the people that I mentioned to illustrate the problem of these drug crime offenses," Bukowsky says, explaining that she'd only learned about Soubasis "by coincidence" through a stranger's Facebook message she'd read the night before the meeting.

Soubasis was one of several cases Bukowsky mentioned during the December 21 meeting, she says. Later that same day, Parson announced that he'd issued four commutations and 25 pardons — though none of the cases were drawn from her suggestions. (Parson's office would later put out a statement that claimed the day's earlier meeting "had no impact on those decisions.")

But life was about to change for Soubasis.

Three months later, on February 26, Parson announced a second wave of clemencies that included a commutation for Soubasis. While not an order for immediate release, the governor had given the 45-year-old inmate the very thing Missouri law had denied him at sentencing in 2005: Eligibility for parole.

Some 270 miles away from Jefferson City, in a cell within the Missouri Eastern Correctional Center, Soubasis had no idea that his name had been floated during the December 21 meeting with the governor. The news took him completely by surprise.

"I just lost it," he says in a phone interview from prison. "They gave me the piece of paper that said, 'Your prior release date for 12-29-2029 has been canceled for a parole hearing March 18.' It's just been a whirlwind."

Soubasis's 30-year sentence for drugs is egregiously long — the equivalent of a life sentence, a punishment Missouri law also designates for first-degree murder — but his case is just one among hundreds of Missouri drug offenders whose sentences have been "enhanced" by a uniquely harsh sentencing law known as the "Prior and Persistent Drug Offender" statute.

Triggered by two previous drug convictions, the law erased a defendant's parole eligibility and upgraded mid-level felonies to Class A crimes with mandatory prison sentences starting at ten years to life. Effectively, the law allowed prosecutors to easily turn a few grams of drugs into decades of prison time, and it was particularly easy when, as in Soubasis's case, the defendant had been busted with meth in a hotel room.

The location of the arrest gave prosecutors an additional weapon at trial: An "enhancement" specifically written to upgrade charges against defendants busted for methamphetamine crimes in "any structure or building which contains rooms furnished for the accommodation for lodging of guests."

It wasn't until the end of his sentencing that Soubasis says he understood that his 30-year prison sentence would be a "mandatory term," meaning he would never have the opportunity to face a parole board or have his rehabilitation evaluated for early release.

At the time of his arrest, Soubasis was 28, heavily into drugs, and had already been "in and out of prison for years" through earlier drug possession and burglary cases, he says now.

"It really hit me," he says, describing his arrival in state prison in 2005. "When you're looking at 30 years, no parole, you don't see an 'out' date. One day I was just sitting in my cell, I put my hands on my face, I put my head down, and I'm thinking to myself about how I could possibly die in prison. And I think, 'You know what? This place offers every opportunity to change myself, and even if I die in here, at least I have done something to better myself.'" 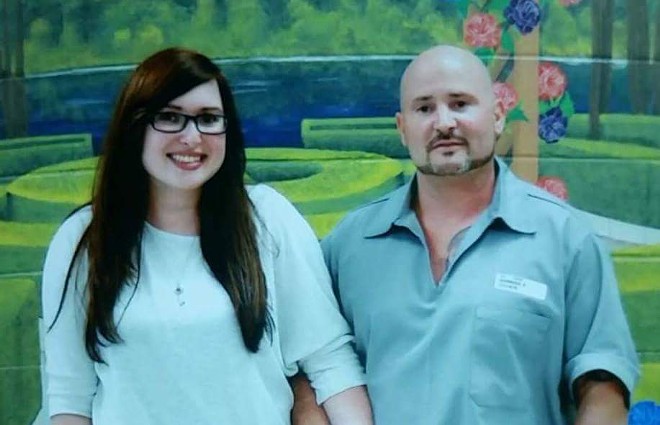 Over the years, Soubasis made good on his resolutions.

He reconnected with his daughter, who had been in middle school when he went away to prison. He took college courses and graduated with a degree in theology, spent years as a prison barber and amassed dozens of hours in various rehabilitation and leadership programs. He met his two grandchildren.

But he was still trapped without a chance for parole.

In an interview, Soubasis' daughter, Bree Wingerter, says she'd spent the past several years trying to contact state legislators and officials to discuss her father's case. She'd posted a Change.org petition in January that's garnered nearly 2,000 signatures, but she wasn't aware that anyone in a position of power was actually paying attention.

"I would find people in office, mayors, the governor, and I would tweet them or email them. I never heard anything back," Wingerter says. "It's so sad to me, because my dad has been gone seventeen-plus years, and there are so many people in that situation. It blows my mind."

Indeed, as an RFT investigation revealed last month, Missouri prison data show more than 230 men and women are serving no-parole drug sentences under the same law that locked Soubasis into his three-decade punishment. Although the Missouri legislature had voted to repeal the "Prior and Persistent Drug Offender" statute effective 2017, the state Supreme Court ruled in March 2020 that the repeal could not be applied retroactively.

Soubasis makes the seventh commutation related to the same repealed-drug law. As Bukowsky noted, his case is an example of the devastating impact felt by drug offenders forced to serve every year of their sentence, even as the state paroled more than 5,000 prisoners in 2020.

But Soubasis's case offers few insights into who gets picked and why. Allies and family members of those left behind by the 2017 repeal have spent years trying to figure out what, exactly, they have to do to land on the governor's radar. After seven commutations, they still have no clear path to follow.

One offender given a commutation likened the process to "hitting the lottery." For Soubasis, that doesn't seem that far off. In a follow-up interview, he says he's not sure what it was that thrust his case to the top of the pile. A friend's text to an attorney? His clemency petition? His daughter's online petition?

He can only conclude, "Somebody, somewhere, said something." (In a previous statement to the RFT, the governor's office declined to provide specifics about the governor's clemency selection process, writing, "the Governor’s legal team works to review pending clemency applications including requests for pardon and commutation" and "an offender’s behavior in prison and participation in rehabilitative and restorative justice programming are also factors.")

In any case, Soubasis has a future to plan. Pending approval from the parole board, he hopes to move in with a childhood friend who runs a construction business in Illinois. The setup will give him a job and proximity to his daughter and grandkids. The possibilities give him hope — but he says he can't help but think about those he will leave behind, the drug offenders locked into multi-decade prison sentences without hope for parole.

"I'm not the only one," Soubasis says. "I look around here, and there are a handful of guys that are literally the greatest guys I have ever met. They came to prison and they absolutely changed their life, and now they are respected by staff and inmates."

"People here can change here," he argues. "It's just that nobody gets to see it."