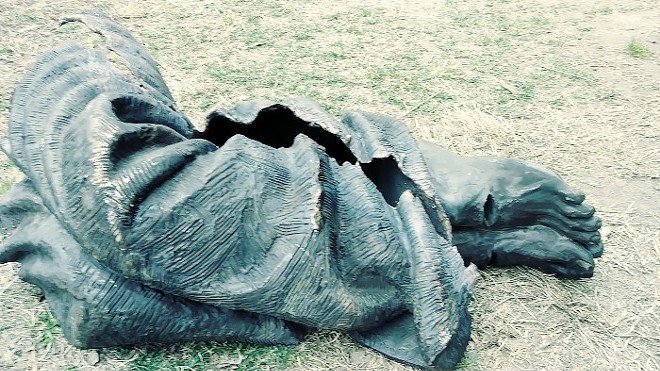 Pastor Larry Rice of New Life Evangelistic Center tells the RFT that someone, possibly the original thief, tried selling the whole sculpture at a scrapyard in north St. Louis. He was refused but quickly found a buyer in the parking lot, according to what police told Rice.

The parking lot exchange was captured on video, and the buyer later turned up across the Mississippi River at a scrapyard in the Metro East. Rather than try to sell a whole sculpture for scrap, which might raise a few eyebrows, the man was selling chunks of the sliced bronze figure.

According to Rice, the man was apparently well known for trying to peddle suspicious metals, and police were called. Parts of the sculpture were recovered there. Rice says other pieces were found somewhere else, but he's not sure where. St. Louis police say detectives were able to locate some of the pieces.

No one has been charged in the case. Stealing the statue took some work. It began on the night of March 2 when a man was spotted using a gas-powered saw to cut away the legs of the bench, where the figure of Jesus was depicted as sleeping underneath a blanket, symbolizing his connection to the homeless.

After a neighbor called police, a 57-year-old was taken into custody but later released pending an application of a warrant. On March 5, New Life staff found the sculpture in the middle of the street. They tried to drag it back, but it was too heavy to bring inside. While the staffers were on the phone, figuring out their next move, a thief or thieves returned and hauled the sculpture away.

Police later released an image of a white pickup they believe was connected to the crime. So far, no one was been arrested for the March 5 theft, St. Louis police say.

Rice says he's been speaking with an artisan who repairs sculptures, and he's reached out the original artist to see if it can be repaired. He says it could be symbolic of New Life's mission to rebuild the lives of unhoused people to rebuild the Homeless Jesus statue.

"It becomes symbolic," Rice says, "if we're able to put it back together."

But even if they're able, Rice thinks he will move the sculpture out of St. Louis to another New Life location in Springfield, where he thinks it would be safer.