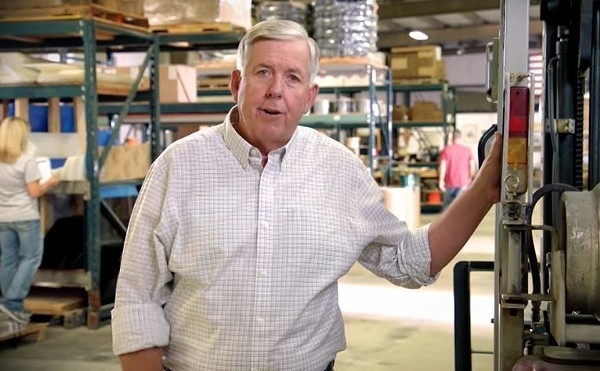 Spring has sprung! Following a brutal February freeze, the thaw is now in full effect. The sun is out, birds are singing, bees are trying to have sex with them — as is our understanding, anyway. After a ruthless twelve months and an even more relentless winter, things seem as though they are finally, maybe, looking up.

But you aren't celebrating. You're pacing back and forth in a fury, peering out your window at the sunny outside world with your fists clenched so tight that your nails are cutting into your hands. You're not even positive what it is, specifically, that you're furious about; all you know is that you are untethered and your rage knows no bounds. But fear not: We're here to help.

Welcome back to the Big Mad, RFT's weekly roundup of righteous rage. No longer will you need to wonder why you are an absolutely apoplectic asshole all the time; simply take that fury, ascribe it to any or all of the bite-sized bits of bile below, and you'll finally have a plausible explanation for why no one you know can stand to be around you anymore. Simple! Let's dive in.

Money, then misery: Missouri Governor Mike Parson often invokes the values of "personal responsibility," but when the state screwed up and overpaid $150 million in unemployment benefits, that well-worn platitude made a sudden heel-turn and flipped both middle fingers at people who had the least responsibility for the blunder. Instead of forgiving the payments, Missouri sent more than 46,000 letters demanding hundreds and even thousands of dollars, all while acknowledging the recipients had been given the funds through "no fault of your own." The Missouri legislature has become, somehow, the only adult in the room, but its proposed legislation would forgive only some of the debts — and as the process of lawmaking progresses through its usual dithers, people are already seeing their wages garnished. It's amazing what a small conservative government can do when it wants to be a huge jerk.

God's house: In just the latest example of Church: What Are We Even Doing Here, a Malden, Missouri pastor is on leave and in counseling this week after a sermon he delivered in which he chastised the women in his congregation for not being hot or putting out enough went viral on social media. "Now look, I'm not saying every woman can be the epic trophy wife of all time like Melania Trump — I'm not saying that at all," First General Baptist Church Pastor Stewart Allen-Clark says in the video. "Most women can't be trophy wives, but you know, maybe you're a participation trophy." He then goes on to refer to women from Mexico as "taco belles" before busting out the good book in order to promote some good old-fashioned spousal rape. "The wife has no longer all the rights over her body, but shares them with her husband,” he says, quoting a verse from Corinthians. “So whenever she’s not in the mood, dig out your Bible.” Man of God, or Hypeman of the Patriarchy at an open mic night hosted by an incel forum for little league dads? It's getting hard to tell the difference.

The entire boot: Missouri lawmakers are so gung-ho about backing the blue that they're gunning to add more protections for officers under investigation for misconduct. For indeed, these vulnerable officers, like babes in the woods, wearing naught but flannel sacks and gun belts, are in grave danger — of having their actions scrutinized by their own departments! Senate Bill 26 would alert officers accused of misconduct and force complainants to submit "sworn affidavits" — two details noted by none than St. Louis Metropolitan Police Chief John Hayden, who penned a two-page letter to lawmakers eviscerating the bill and concluding that its aim "significantly interferes with our ability to meet the expectations of Missouri residents with respect to holding officers accountable for sustained allegations of misconduct." The proposed legislation, whose protections have been dubbed a "law enforcement bill of rights" by supporters (apparently the one in the U.S. Constitution just doesn't cut it anymore) has already been passed by the Missouri Senate and is now in the House's court.

Move along, junior: With this week's news that Roy Blunt will not seek re-election in 2022, Josh Hawley will now be Missouri's senior senator — and god only knows what fresh hell might now join him in the Senate. A sentient pile of problematic Punisher skulls? The reanimated corpse of Eric Greitens, back from the political grave? Courtland Sykes? (Speaking of, did we ever figure out definitively whether that guy is a Jimmy Kimmel prank or not?) A bible where every page is a pop-out anti-abortion billboard? The removed Forest Park Confederate monument but also it's a Proud Boy now, somehow? So many options, so little Xanax.

Failure to deliver: In 2019, Missouri officials tried really, really, hard to shut down the state's sole remaining abortion provider, the Planned Parenthood clinic in the Central West End. Graded by effort alone, they did a great job of terrorizing the clinic's staff and doctors — they even tracked patients' periods to expose a non-existing spree of "failed abortions" — but tragically, these totally good faith efforts only managed to trample reproductive rights for most of a year before an administrative judge ruled the state had improperly withheld the clinic's abortion license. Last month, on February 26, the judge issued a new ruling: Missouri taxpayers will be paying $140,000 legal fees to Planned Parenthood. Which seems fair! Still, think of what we could have done with that money instead: Why not throw a few bucks into fixing some potholes, or hire military contractors to modify the Blues’ Zamboni with a toasted ravioli-launcher? Heck, what if we did something really crazy and hired a public defender or two? The mind reels.