Earl Webster Cox Murdered a Young Girl. He Molested Another 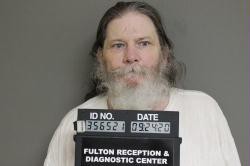 Last year, Earl Webster Cox was sentenced to life in prison for the murder of a nine-year-old girl in 1993. On Friday, a second victim, now an adult, faced Cox on a video feed as he took an Alford plea, admitting that prosecutors had enough evidence to potentially win a conviction against him on four counts of sodomy — the legal term for sexual assault — against a victim below the age of fourteen.

The crimes took place in 1988 and 1989, when the victim was seven years old. For Cox, it was just one chapter in a horrifying, decades-long spree of violence, child abuse, sexual exploitation.

Cox gave no statement during the hearing Friday, though the St. Louis Post-Dispatch reported that the victim addressed him directly, telling him that she had spent 30 years anticipating that moment: "You will rot in a lonely jail cell — no family, no friends and most importantly, no more victims."

Cox has spent significant stretches of his life in prison, but he used his years of freedom to prey on children. In 2019, the RFT traced the path of his crimes, starting with his Air Force deployment in Germany that ended in a court-martial and prison sentence for abusing four little girls.

Cox did face accusations of abuse in 1989, records show, but no charges ever stuck. A parole violation sent him to prison for another year, but he was released to the St. Louis area in December 1992.

Eleven months later, on November 27, 1993, a hunter in St. Charles County discovered the body of nine-year-old Angie Housman. The killing went unsolved for decades and left deep scars on the community and the children who grew up in the incident's shadow. It took more than 25 years for DNA evidence to link Cox to the case.

In a statement on Friday, St. Louis County Prosecuting Attorney Wesley Bell said that he hoped Cox's guilty plea "helps to honor the memory of Angie Houseman and to honor the still-living victims of this predator."

Bell continued, "We hope this conviction gives some closure and semblance of justice to these courageous victims."