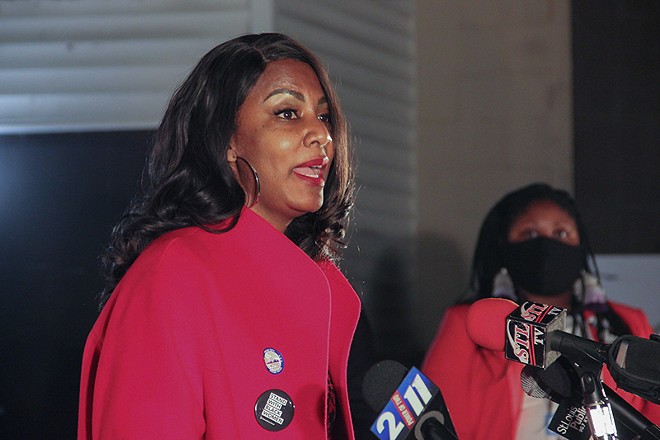 Tishaura Jones and Cara Spencer will face each other in the April 6 general election to be St. Louis's next mayor, but Tuesday's unprecedented primary was bigger than just the candidates' individual victories.

The election was also an experiment: As the RFT detailed earlier this week, St. Louis's rollout of approval voting has been shadowed by measures of both anticipation and concern, and no one could predict how voters would behave when given the option to approve of "as many" candidates as they wished. One researcher described the March 2 primary as, simply, "a big unknown."

But as the dust begins to settle, some of those doubts are now clear — a cause for celebration to some, and, for others, a disaster.

The first big question of the primary — would St. Louis voters actually "approve" multiple candidates? — was answered shortly after 8 p.m. with the first batch of results released by the St. Louis' Board of Election.

At the time, Patrick Lynn, campaign manager for Lewis Reed, was inside SqWires Restaurant & Annex in Lafayette Square, where the campaign's watch party was just getting started. Standing at a computer set up next to a projector at the front of the room, Lynn pulled up the early results from 3,934 absentee ballots: They showed Tishaura Jones ahead of Reed by less than two percentage points, with Cara Spencer comfortably in third.

But what stood out to Lynn was total votes, the "approvals," numbering some 5,400 — far more than the number of ballots. Working the math out in his head, he said the numbers suggested that about 40 percent of voters were approving multiple candidates.

Whether or not voters knew about the new system beforehand, they appeared to embrace it. The final, unofficial results show voters approved an average of 1.56 candidates per ballot.

Looks like all the St. Louis votes are in. Also 1.56 votes per ballot in the mayoral election. A clear leader so far going into the runoff, but that's a lot of time for future debate between the final two candidates. pic.twitter.com/tR6sElTgYA


It was a major victory for the approval voting system, which has never been tested in a city of St. Louis' size or political complexity. Aaron Hamlin, executive director of the nonprofit Center for Election Science — which has backed local efforts, including those in St. Louis, to institute approval voting systems — tweeted joyfully Tuesday night as the results made it more and more clear that voters had indeed responded to the new system.

Hamlin noted that "the progressive vote in St. Louis was not split," seemingly in reference to the progressive candidates' performance, with 57 percent of voters approving Tishaura Jones and 46 percent approving Cara Spencer. This wasn't 2017 all over again.

"No voting bloc should have to suffer from vote-splitting," Hamlin's tweet continued. "Good luck doing that under the crappy choose-one voting method. More cities need to use approval voting!"

How bad was St. Louis' turnout on Tuesday? With just 22 percent of registered voters showing up, the 44,358 ballots cast in the primary notched a drop of more than 11,000 votes compared to 2017.

While this may have been expected, given the pandemic, having less than a quarter of your voters show up to choose the city's next mayor is a bad look. It could also make it more difficult for a future mayor to cite a mandate of the city's voters if only a sliver of the city can get themselves to the polls.

Perhaps, with the mayoral race now simplified to two candidates, the turnout could look very different on April 6 after an additional month of campaigning and public interest — though that doesn't do much for voters worried about catching COVID-19. Despite vaccine efforts, the virus isn't going to disappear by the general election next month, but Missouri's election laws have already moved on: Thanks to the Missouri General Assembly, residents are no longer able to qualify for absentee voting by citing their status as "at risk" for infection, as they were able to do during the November Presidential election.

Who knows, St. Louis could surprise us with a massive showing. But right now, the prospects for a healthy turnout are not looking great for the next pandemic election.

A lot of people tell me my daughter is aloof, smug standoffish. It is not true, but If you believe that don’t blame her, blame me. She grew up in a fun household where serious talk was what she heard everyday from me, her mother & our friends. She got her wonkiness honest

On Tuesday night, as a crowd of reporters waited for a press conference outside Tishaura Jones' campaign headquarters, Virvus Jones, a former city comptroller, emerged from the interior with a joking request for those assembled there.

"Is there a Tod Robberson here?" he asked the crowd, referencing the editor of the St. Louis Post-Dispatch's Editorial page.

"Anybody?" he called again. "Anybody seen Tod Robberson?"

Robberson was not there, but Virvus was clearly enjoying the moment as a vindication for his daughter: For years, Tishaura Jones has sparred bitterly with the Post Dispatch's editorial page, accusing it, and Robberson in particular, of deploying racism in commentary on multiple controversies involving her office. Virvus has waded into this fight as well, spending the 2021 election repeatedly blasting Robberson on Twitter.

For Virvus, however, the victory is about more than just the satisfaction of seeing his Twitter targets lose face. He is a committed cheerleader of his daughter's career, and it shows: It's not often you have a public official's father hop on Twitter to wryly debunk the perception that his daughter is "aloof, smug [or] standoffish" by explaining "she got her wonkiness honest" through an upbringing in a politically active household.

Quoted in a February 22 Post-Dispatch retrospective on the "baggage" of old St. Louis politics in the 2021 election, Virvus said his daughter's victory wouldn't change his role in her life.

"I will do as I have done all my life," he said. "Whatever I can do to help my daughter to be successful in whatever she wants to do."


In light of the doubt swirling in the lead-up to Tuesday's primary, it's notable that two major endorsements, from the St. Louis Post-Dispatch and St. Louis Police Officers' Association, appeared to make little difference in the outcome.

The Post-Dispatch's editorial board awarded its endorsements to Cara Spencer and Lewis Reed, though not without adding a jab at Tishaura Jones for refusing to participate in the paper's candidate forum.

As the city's largest police union, the SLPOA endorsement has long been seen as a dubious mark among the city's progressives, who revile the association's extremely revile-able business manager Jeff Roorda. In the association's endorsements, featured in its latest newsletter, it described Tishaura Jones as an "anti-police mayoral candidate" and offered a guarded endorsement of Lewis Reed. The endorsement gushed at the candidacy of Andrew Jones, describing him as "a breath of fresh air" and "unwavering in his support of rank-and-file cops."

In the end, though, voters rejected Reed in favor of the race's two progressives, and Andrew Jones finished with 14 percent of approvals, miles behind both Reed and Spencer. It suggests that few voters followed the endorsements' proposed pairings — if they were even aware of them to begin with.

St. Louis is facing a historic education crisis and calls for a moratorium on new charter schools. With that focus on students and young people, it shouldn't go unnoticed that both candidates in the runoff are single moms currently raising school-age sons — a perspective that's never before occupied the mayor's office.

Spencer and Jones already share policy priorities and broadly agree on the city's need to address public safety, but the overlap in this role means that, whomever voters choose, the next mayor will be tapped into the region's education system in a way that's familiar to thousands of families.

Kids the same age as Spencer's and Jones's sons are counting on schools to flourish and function into the future, and for a city whose government is institutionally absent from its school district, having an active parent arrive on the scene couldn't have happened at a better time.

There's no charm in losing an election, and for Lewis Reed, Tuesday's defeat marks his third failed run at the St. Louis mayor's office. Yet, whoever the next mayor is, they will have to deal with him as Board of Aldermen president for at least the next two years.

Reed is a  skilled and successful public official, and you'd have to be to spend more than two decades in city government, including four terms in the top job above the city's legislative body.

In his concession speech, Reed urged St. Louisans to come together and "put aside some of the differences that constantly divide us." He vowed that he would work with the future mayor to improve St. Louis:

Reed's political future is a crossroads. While he's won election after election for President of the Board of Aldermen, his 2019 victory was a nail-biter, with less than 2,000 votes separating him from his two opponents.

Reed's performance in the 2021 mayoral race doesn't bode well for a fourth attempt. According to the unofficial results, he failed to win the majority of approvals in even a single ward.

Here is my initial mapping effort of the results of the St. Louis City Municipal Primary on March 2, 2021.
▶️ https://t.co/xtRa64vgUx

(for the #datafam folks, I used the new spatial layering feature to achieve the margin shading, no more dual axes!) pic.twitter.com/iqONrDwqWq