Editor's note: This story has been updated with additional information.

Alex Garcia walked out of a Maplewood church this afternoon to rejoin his family after more than three years living in sanctuary to avoid being deported to Honduras.

Garcia, 39, was ordered in September 2017 to report within two weeks to Immigration and Customs Enforcement officials who were intent on carrying out Donald Trump's new "zero tolerance" immigration policies. Rather than risk permanently separating from his wife and five kids, all of whom are U.S. citizens, he left their Poplar Bluff home and moved into a makeshift apartment in the basement of Christ Church.

See Also: ICE Ordered Alex Garcia to Report for Deportation. He Took Sanctuary in a Maplewood Church Instead.

His wife Carly Garcia and a coalition of supporters have worked ever since to negotiate a solution with ICE to allow him to remain in the country.

They finally succeeded today. After 1,252 days in sanctuary, Garcia and his attorneys and allies announced they had secured a written promise from ICE that he could leave the church and the feds wouldn't seek to arrest or detain him. Shortly after 3 p.m., he walked through the red front doors where he met a crowd of jubilant supporters and was presented with a key to the city by Maplewood’s mayor.

"Because of all of your support and the new administration, Immigration and Customs Enforcement made a promise that I am no longer a priority for deportation," Garcia said in a prepared statement. "We are not done yet. There is still so much work that has to be done, and I look forward to being able to join you all out there in the community and continue to fight for my permanent protection.” 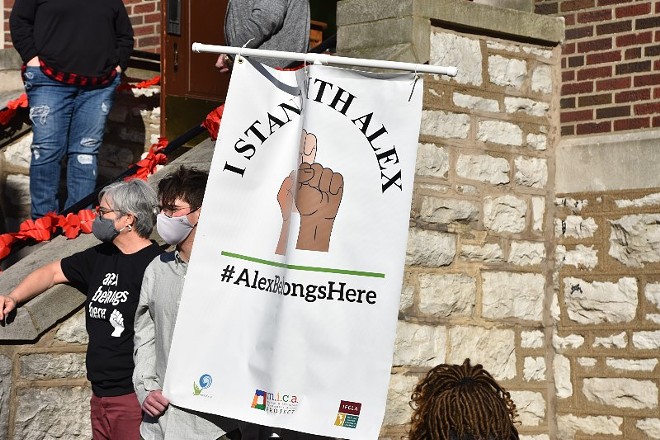 The about-face by ICE follows new directives issued last week by President Joe Biden. His memo instructs immigration agencies to refocus their resources on violent criminals, rather than spending them on otherwise law-abiding immigrants. That led to Garcia's freedom this afternoon and could have wide-ranging effects on millions of immigrants and refugees across the country.

Nicole Cortés, attorney and co-founder of the Migrant and Community Action Project, said there are about 50 people in the United States publicly known to have been living in sanctuary. Garcia was the only one in Missouri.

“In the last three and a half years, it has been an endless march toward freedom,” she told the crowd this afternoon.

Cortés actually began working with the family seven years ago when they were seeking citizenship for Garcia, hoping he would qualify because he was married to a U.S. citizen. However, a deportation order from 2000 blocked his path. He had been caught during his initial attempt to cross the southern border that year and sent back to Honduras. He later returned to the U.S. and managed to board a northbound train, landing by chance in Poplar Bluff. He built a life there, marrying Carly and working construction to provide for his family. But that old deportation order meant his only path to living legally in the United States would be to leave, wait ten years and then apply for re-entry.

“Let’s be totally clear about this, he is not a criminal,” said Javad Khazaeli of Khazaeli Wyrsch, LLC, an immigration attorney who recently joined Garcia’s legal team to negotiate with federal officials. “He is caught in a Kafka-esque administrative loop.”

During the Trump administration, that loop was endless. The ex-president had made harsh treatment of immigrants and refugees a platform of his campaign, and he spent his lone term in office enacting myriad policies to choke off access to the United States for people born elsewhere. That included slashing refugee allotments to historic lows, sinking millions of dollars into a failed border wall and using the separation of families as a deterrent to those seeking to enter the country.

In that environment, what Garcia and his family had hoped would be a few weeks or months of sanctuary turned into years. Carly and the kids eventually had to give up their house in Poplar Bluff and move in with her parents before they relocated to Maplewood to be closer. Garcia remained in the church, keeping busy by scouring the old stone building for walls to paint and broken bits to fix.

Throughout, Cortés worked closely with the St. Louis Inter-Faith Committee on Latin America. The nonprofit’s executive director Sara John helped lead the support effort, first to find a sanctuary and then create whatever political pressure they could to not only help Garcia but reform immigration laws, an ongoing effort.

Over the years, Cortés and John have become close with the Garcias, their kids playing together as the mothers worked and strategized. Carly Garcia joined IFCLA as the organization's operations manager. Their activism on immigration issues has included marches, countless phone calls, petition drives and even trips to Washington D.C. to press members of Congress and their staff members for change.

Congresswoman Cori Bush announced earlier this week she was introducing legislation that could lead to permanent residency for Garcia. That so-called private bill is still in motion. If passed, it could mean lasting protection against the shifting whim of political leaders.

“St. Louis and I are so grateful and relieved that Alex has been reunited with his family at home,” Bush said today in a news release. “This is the power of organizing. Alex was able to go home today because of the tireless work of his family, organizers, faith leaders, lawyers, Christ Church UCC in Maplewood, and community members who fought tooth and nail for years to make this day a reality.”

Christ Church was an unwavering ally of the family throughout Garcia’s time in sanctuary. Pastor Rebecca Turner, ever protective of the congregation’s guest, accompanied supporters on tense visits to ICE’s office in St. Louis, standing alongside other pastors, even as federal agents threatened to arrest anyone who didn’t leave. This afternoon, she stood on the steps of the church and led the group in prayer.

“Everybody say ‘Hallelujah!’” she shouted.

In the end, Garcia said goodbye and jogged with Carly and their kids to the family minivan as news reporters and photographers trailed along. They turned out of the parking lot and made a pass in front of the church to huge cheers before driving out of sight for an afternoon in St. Louis.

“Thank you, everyone,” Garcia said before they left. “Now, I’m going to enjoy my family — the way it’s supposed to be.”