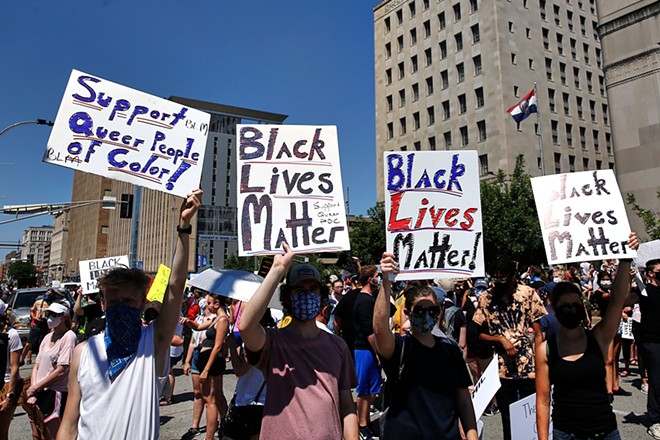 The bill also aims to prevent municipalities from decreasing the budgets for law enforcement agencies in Missouri by more than 12 percent over five years.

“Freedom of speech cannot be done at the personal safety and expense of another,” said Sen. Bill Eigel, a Republican from St. Charles County sponsoring the legislation. “And I think that’s what’s happening.”

After many hours of debate, the bill received initial approval around 1:15 a.m. The Senate must pass the legislation once more before it goes to the House. That vote is expected to take place this week.

“Our state’s focus right now needs to be on restoring credibility to our police departments and increasing transparency,” said Sen. Steve Roberts, D-St. Louis. “Creating new criminal offenses for protesters and protecting officers under investigation is the wrong priority.”

Sen. Karla May, D-St. Louis, said she has led protests that block the street to decry injustice in her community.

“You can’t silence the people’s voices,” May said. “You have to look at the Civil Rights Movement. If it wasn’t a cry out by the peaceful protests, there was no justice.”

May attempted to add requirements for mental health screenings of law enforcement officers. While she didn’t get the mandate through, she was able to add language to establish a fund to provide support for officers who have experienced trauma.

“What this addresses is the movement to, in effect, go after our law enforcement who are actually doing the brunt of the work of keeping communities safe,” said Brattin, who represents Cass County.

The other two measures included were penalizing those who vandalize public monuments and prohibiting probation or parole for those who assault first responders.

A large part of Eigel’s bill was focused on what he called the “Law Enforcement Bill of Rights.” It’s a series of statutory changes, “that seek to strengthen their due process rights when they’ve been accused of misconduct in an internal investigation,” he said.

It requires that law enforcement agencies give officers notice of an alleged violation. St. Louis Metropolitan Police Chief John Hayden opposed the bill in a letter, stating that giving officers advanced notice could jeopardize an investigation. Some of the requirements could also have a “chilling effect” for witnesses who want to come forward.

Hayden wrote, “Senate Bill 26 significantly interferes with our ability to meet the expectations of Missouri residents with respect to holding officers accountable for sustained allegations of misconduct.”