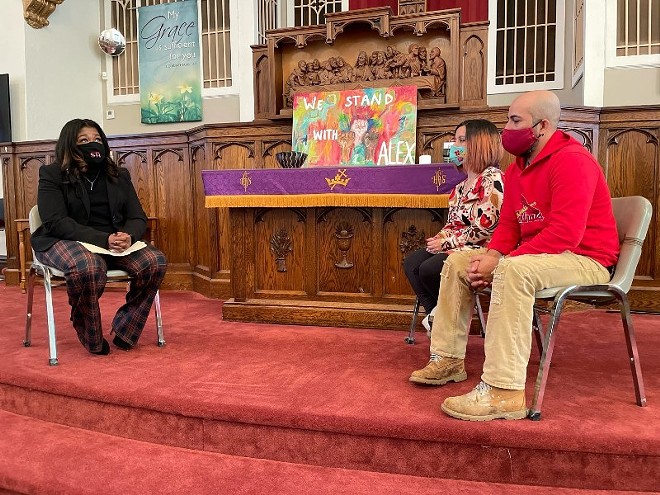 Congresswoman Cori Bush is introducing legislation to clear the way for legal residency for Alex Garcia, who has spent more than three years living in sanctuary in a Maplewood church.

"We are fighting for Alex, because Alex belongs here," Bush said today during an online press conference.

Garcia, 39, was ordered in 2017 to report to Immigration and Customs Enforcement in St. Louis to be deported to his native Honduras. The married father of five had previously been granted temporary permission to remain in the country, but he and others who had been deemed low-risk by immigration officials by prior administrations became a target of Donald Trump's "zero tolerance" policies.

As a young man in 2000, Garcia was caught crossing the border and deported. He later tried again and managed to make it to Poplar Bluff, where he lived for more than a decade, building a reputation as a tireless construction worker and family man. When he and his wife Carly, a U.S. Citizen, tried to secure citizenship, or at least legal residency for Garcia, they learned that the old deportation order from 2000 blocked their way.

If Garcia had been deported, he would have had to wait ten years before he could apply to legally return to the United States, says attorney Nicole Cortés of the Migrant and Community Action Project. Given the violence of Honduras, Garcia didn't consider moving his wife and kids — all U.S. citizens — there. And his family worried he could be killed if he went back.

"His family was unlikely to see him ever again after [deportation], unless they were to relocate," Cortés said.

So when Garcia received a letter in 2017 to report to ICE to be removed, he moved into a makeshift apartment in the basement of Christ Church. He has been there ever since.

"We've been living in this cycle of trauma for the past three and half years, and it has felt unbearable," Carly Garcia said. "Seeing my babies my babies cry for their father, and seeing my husband unable to meet their needs because he can't leave the church — no mother should endure that."

Bush introduced what is known as a private bill or private legislation that seeks permanent legal status for Garcia. Lawmakers sponsor private bills for a variety of reasons, but they often focus on helping people remain in the country. They are rarely passed — only four have made it all the way through the process since 2007 — but it could still offer a short-term solution for Garcia and his family.

The bill's next stop is the House Judiciary Committee Subcommittee on Immigration and Citizenship. If it makes it past the subcommittee, Garcia's deportation order would likely be put on hold as the bill is decided. That's a pathway that had in the past allowed people to remain in the country for years at a time, but the Trump administration cut off that avenue as part of its crackdown.

Bush's predecessor, then-Congressman Lacy Clay, had introduced a private bill for Garcia in 2019, but it would have needed to make it all the way into law in the Trump era to help Garcia.

Now that Trump is out of office, there is more hope for Garcia. President Joe Biden signed a new memo last week, resetting federal immigration priorities and undoing much of the previous administration's harshest directives.

Sara John, executive director of the St. Louis Inter-Faith Committee on Latin America, has been instrumental in helping the Garcia family. The larger goal is to reform not just the enforcement policies, which shift from president to president, but immigration law to ensure that families won't continue to land in the same situation as the Garcias.

"We are building power and organizing through multiple strategies until this family and — as Carly and Alex have expressed multiple times — all immigrant families are free to live and love in the fullest expression of human dignity," John says.

Pastor Rebecca Turner of Christ Church says the Garcias have become beloved members of the church's family during the past three-plus years, but she has also seen in person the toll its has taken. For the first year, Carly and the kids still lived nearly three hours away in Poplar Bluff and could only visit on the weekends. Outside of their visits, Garcia rarely smiled. Every Sunday was another separation when his family left and he stayed.

"It was gut-wrenching to witness," Turner says.

It was only later, when Carly and the kids moved closer, that Turner began to understand the full effect of the separation.

"When his wife and children moved to Maplewood to be near him, the smile began to come out. His body relaxed a bit," Turner said. "For us, it was like he was a new person, but in fact, he was able to be more of the person he really was."