St. Louis officials say the city's jails are well run and that, no, an incredulous group of civil rights attorneys can't visit to investigate dozens of accounts to the contrary.

Following an hours-long jailhouse revolt on Saturday that involved more than 115 inmates at the City Justice Center, the group of seven attorneys wrote to the city with concerns about "inhumane" conditions and reports of retaliation against detainees. The lawyers called for immediate improvements and asked to be allowed in to investigate.

"This ongoing crisis demands immediate action," read the letter signed by attorneys from the ACLU, Office of the Missouri Public Defender, ArchCity Defenders and the Roderick & Solange MacArthur Justice Center.

In response, City Counselor Michael Garvin flatly rejected any suggestion that inmates are being mistreated and ridiculed the attorneys' allegations.

"Although your letter is clearly intended to spread a false narrative, I will indulge it with a response in order to set the record straight," Garvin wrote.

The city counselor argued that any problems experienced by those incarcerated were of their own making, and even then jailers worked to correct problems as soon as possible. That has included, Garvin wrote, temporary water shutoffs that resulted from inmates who clogged up toilets and flooded the floors.

"The incarcerated rioters referenced in your email committed felony crimes when they attacked a Corrections officer and vandalized portions of the Criminal Justice Center on February 6," Garvin wrote. "The rationalizations suggested by your group for this criminal conduct are simply false."

Attorneys and advocates for people incarcerated in the City Justice Center and the city's Medium Security Institution, known as the Workhouse, say they've received a surge of calls since mid-December from their clients and their clients' families who described inadequate COVID-19 protocols, harsh treatment by staff and dangerous living conditions.

"These concerns have only escalated, and conditions worsened, since the protest this weekend," the attorneys wrote in their letter. 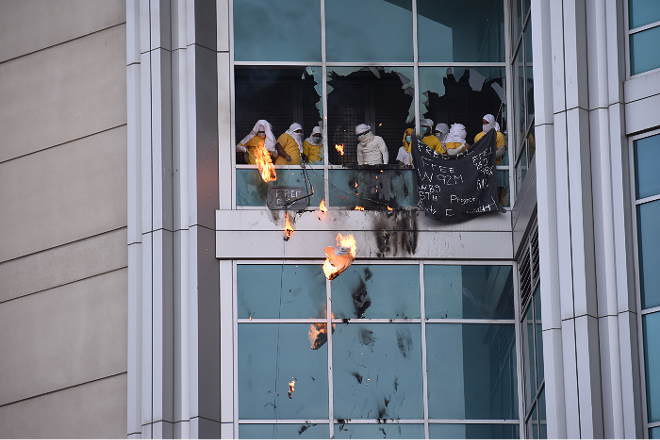 On Saturday, inmates jimmied the locks on their cell doors and took over two separate units on the fourth floor of the City Justice Center. They were then able to get into adjoining hallways where they smashed windows and threw stools, video monitors, clothing and whatever else they could find onto the street below. Images of the inmates, framed by the shattered windows as they burned bedding, made national news — and drew scrutiny of jail practices.

St. Louis Public Safety Director Jimmie Edwards told reporters on Saturday it began with a one-on-one scuffle with an inmate and corrections officer, and additional inmates jumped in. The guard escaped and was later examined at a hospital and released. In Edwards' telling, the ensuing uprising was no more complicated than inmates taking advantage of a spasm of violence.

"So this was not a situation where there were demands being made by anyone," Edwards said. "These were just very angry, defiant, very violent people that we house at the Justice Center."

But advocates for the incarcerated men say inmates have lodged complaints for weeks, including two protests within days of each other in late December and early January. The February 6 uprising was an act of desperation after being ignored, advocates say.

"We have received first-person reports of some people in CJC going over 72 hours without being provided with food or water, the very most basic necessities of life," the attorneys wrote. "Other floors are receiving limited, but insufficient, food. Others have had access to showers, commissary, and calls to family restricted or entirely withheld." 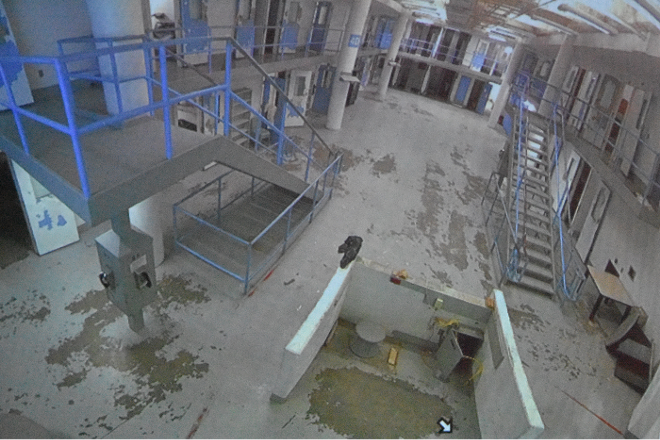 Other complaints included being forced to sleep on sewage-slimed floors without mattresses, or mattresses without bedding. After Saturday's revolt, 65 inmates were shipped over to the Workhouse where they're held in cells with little to no heat, according to accounts relayed by the attorneys.

On Monday, Mayor Lyda Krewson announced she was appointing a task force to investigate what's going on at the jail. The chair of the task force, former Chief Justice Michael Wolff, backed out of the role just two days later. He told KSDK that, with a mayoral election looming this spring, he thought it was better to wait to see what the new administration wanted to do.

There are seven remaining members of the task force, and Krewson has said she hopes an independent investigation by the group will determine the facts and provide credibility.

As they await their findings, city officials continued to insist the jails are operated in a professional, humane manner and any problems are the fault of inmates. Garvin said in his letter that the jails follow strict COVID-19 protocols, including thrice daily rounds by nurses, easy access to masks and the isolation of new inmates for fourteen days to ensure they don't bring in the virus from the outside.

"These are just some of the measures taken at CJC," Garvin wrote to the attorneys. "Your careless accusations are an insult to the Corrections officers, nurses, and doctors who have worked diligently (and successfully) to protect the health and safety of detainees at CJC and MSI."

But the attorneys say they've heard dozens of accounts that consistently contradict the city's claims.

They ask the city to verify jailers are providing regular meals, clean water, bedding and mattresses. They also want to be able to visit common areas and housing units, as well as speak with detainees.

So far, the city has said they're not getting in.

"CJC staff is currently focused on assessing and repairing the damage caused by the rioters," Garvin wrote. "We do not plan to provide tours of the facility."