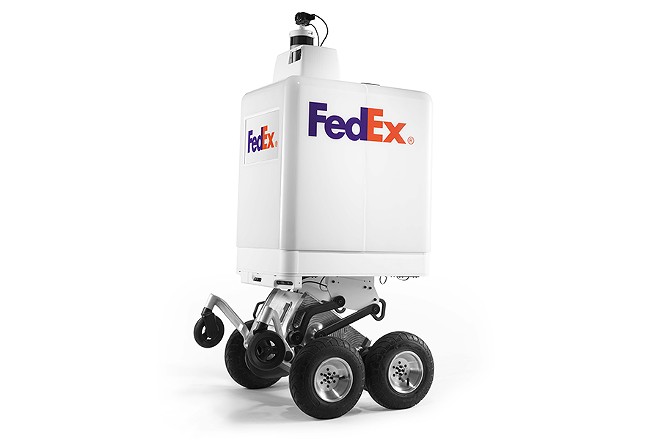 A proposed Missouri law that would open the state's sidewalks and roadways to robotic delivery vehicles drew support this week from Amazon and FedEx, both of which are developing their own delivery bots and have backed similar legislation in multiple states.

If passed, House Bill 592 would give the robots, whether self-driven or piloted by a person, "all of the rights and responsibilities as a pedestrian," according to the bill text. The robots would be free to roll on "any roadway of any county or municipality in the state," as long as they maintain $100,000 in liability insurance and don't "unreasonably interfere with motor vehicles or traffic."

It's the second time Rep. Travis Fitzwater (R-Holts Summit) has proposed such a bill, with his previous attempt in 2020 having died in committee at the onset of the pandemic. That earlier bill was also noted in an investigation by Wired published in August that detailed the political efforts by Amazon and FedEx lobbyists to back robot delivery legalization bills in state legislatures.

There are also safety concerns, particularly when it comes to sharing a sidewalk. In 2019, the University of Pittsburgh halted a trial run of Starship Technologies' "Starship" after a student in a wheelchair complained that she'd been "trapped" when the six-wheeled robot blocked the only accessible entrance to a sidewalk.

Henrio Thelemaque, a lobbyist representing FedEx — which is in the process of testing its Roxo "On Demand Bot" — testified in support of Fitzwater's bill on Tuesday during a meeting of the House Emerging Issues Committee. He said that, while autonomous, the robots in the field are still under human surveillance.

"We've been able to see that having an operator there at any time allows us to not only traverse new terrain, but to effectively communicate with anybody around us," he explained, according to a report by KMOX.

However, in an interview with the radio station and cited in the online story, Fitzwater was described as saying "the bill would permit local governments to ban the 'bots if they so choose" — but this language does not appear in the bill text available online.

According to the bill, local governments would be explicitly restricted from enacting or enforcing laws that would limit the robots' "hours or zones of operation" or the type of property transported — with the exception of hazardous materials, which are prohibited under the bill. The provisions would also prevent local governments from enacting laws relating to robots' design, manufacture, maintenance, licensing, taxation and insurance.

Requests for clarification sent to Rep. Fitzwater's office by email and phone were not immediately returned Wednesday afternoon. We'll update the story when/if he gets back to us.