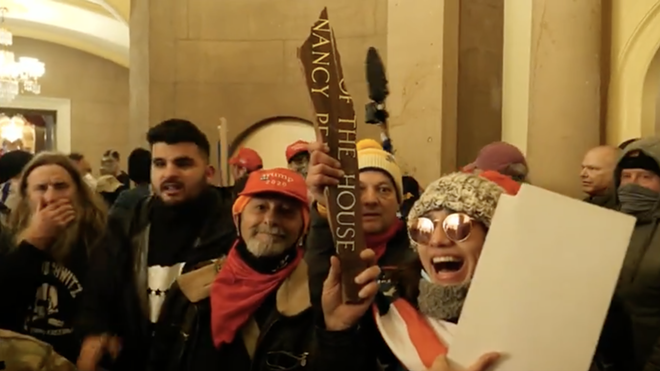 A disastrous family outing to Washington, D.C. has led to federal charges filed against a St. Louis County resident and his niece, both of whom appeared in photographs and video amid the crowds that breached the U.S. Capitol on January 6.

The theft charge may be related to the widely shared images of pro-Trump rioters brandishing the broken nameplate of House Speaker Nancy Pelosi. Last month, the FBI arrested 21-year-old Sullivan resident Emily Hernandez, who had been filmed by the British ITV news station holding the nameplate alongside the others who had rushed the Capitol hoping to stop the certification of Joe Biden's election as president.

But as it turns out, that clip of anti-democracy rioters featured three Missourians celebrating the taking of the Pelosi trophy.


Toward the end of the recording, Hernandez is seen grasping the the nameplate alongside Merry, who is wearing a red Trump 2020 hat.

"Here you go, brother," Merry says to a journalist, as he and Hernandez beam and hold the nameplate up for the camera.

In the same clip, standing just behind the smiling insurrectionists, was Paul Westover of Lake St. Louis. Westover, who wore a distinctive Blues cap to the riots, was arrested Thursday and faces federal charges for felony obstructing, impeding or interfering with law enforcement and three misdemeanors for disruptive conduct and knowingly entering a restricted building.

During Friday's arraignment, Merry said he'd been arrested without his reading glasses, and so the judge explained the restrictions for release. Merry is barred from leaving the Eastern District of Missouri without permission. While the charges are pending, he cannot possess firearms or use drugs.

That Hernandez and Merry are related was a detail released in the FBI charging documents, according to media reports. Earlier this week, Hernandez asserted to the St. Louis Post-Dispatch's Bill McClellan that she had wound up in the January 6 fracas not out of any strong political beliefs, but because she had "accepted an invitation to accompany two family friends" to travel to the nation's Capitol.

Hernandez is charged with five misdemeanors. McClellan noted that Hernandez's parents were "very upset, not only with her, but with the two older Trump supporters who had taken her to Washington."