The Fake News and Real Crisis Behind 'Abortion-Free' Missouri

The death of abortion access in Missouri has been declared several times, but the latest claim of its demise is more than just fake news. Last week, Planned Parenthood's clinic in St. Louis performed the first surgical abortion procedures of 2021 — but the vision of Missouri as America's first abortion-free state is alive and thriving.

On January 22, outside the Old Courthouse in down St. Louis, it seemed like that vision had finally won out. Dozens gathered to celebrate a victory over abortion, even though that victory had already been debunked.

It is true, those words did appear in a January 20 story in the city's newspaper of record — but the rally-goers' signs excluded the beginning of the sentence, which read in full: "But for the entire month of December, no abortions took place in Missouri."

The Post-Dispatch story, bylined by health reporter Michele Munz, was presented as a fact-check of a widely shared "special investigative report" by the anti-abortion organization Operation Rescue. The investigation, published January 5, had touted Missouri as America's "first Abortion-Free State."

The report claimed that in the Planned Parenthood clinic in St. Louis, the sole operating abortion provider in the state, "no abortion appointments have been available there for months, and none are available anytime in the foreseeable future." The report did not describe specific evidence for the claim, but said that it had "confirmed" the clinic was no longer accepting patients. 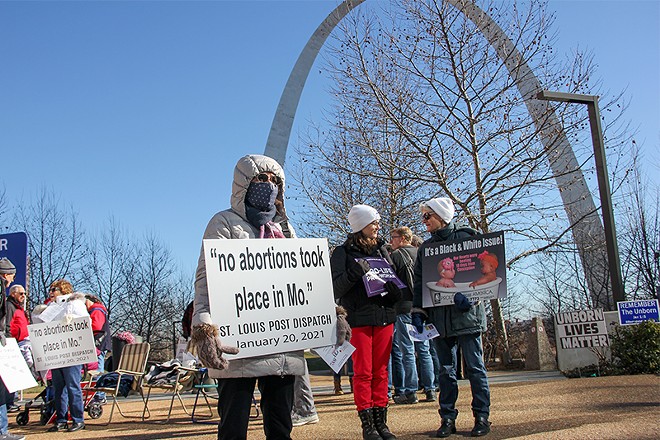 The report was soon picked up by multiple conservative and pro-life websites, and while Planned Parenthood flatly rejected the claim as false, the data it provided to the Post-Dispatch's Munz showed just seven surgical abortions performed in November, and, indeed, none in December.

Data from the Missouri Department of Health and Human Services support Planned Parenthood's pushback on Operation Rescue's claims. The numbers show 39 abortions took place in Missouri from January 1 through November 15, 2020.

Still, that was a drastic fall from 2019, when the state recorded 1,368 abortions. Part of that drop has to do with an increase in medication abortions and telemedicine.

In an interview with the RFT, Dr. Colleen McNicholas, chief medical officer for the regional Planned Parenthood, said that she's observed a general trend away from surgical procedures and toward procedures that allow patients to schedule virtual visits with doctors from their phones. She's also seen more interest in medication abortions, which involve a pill that can be taken at home.

Unless, that is, you are in Missouri. Here, the abortion restrictions require an in-person consent consultation, a three-day waiting period and a pelvic exam, which involves a doctor putting their fingers inside a patient's vagina, even if the person is seeking a pill-based abortion.

While a pelvic exam is medically relevant before a surgical procedure, that is decidedly not the case for medical abortions, McNicholas says. In St. Louis, she and Planned Parenthood's staff have refused to perform a pelvic examination before medical abortions "purely based on ethical principles."

Missouri patients are instead referred to Illinois, which does not ban telemedicine in abortion. There is also no waiting period or consent meeting.

"We don't provide medical abortions in Missouri," McNicholas says. "We are not going to provide medication abortion if forced to perform a medically unnecessary pelvic exam."

This is the underlying story to the claims of an "abortion-free" Missouri. At a time when the pandemic has interrupted medical procedures and encouraged more virtual doctor's visits to reduce the risk of infection, Missourians are still seeking medical abortions. They're just not doing it in Missouri.

That doesn't mean access is gone. McNicholas says seven patients seeking surgical abortions came to the St. Louis clinic last week for their consent meetings before the required 72 hour waiting period. But she acknowledges that Missouri's political culture, particularly the conservative-dominated General Assembly, would like to see that number reach zero, permanently.

"This is part of our frustration," she says, "and the crux of why it's so difficult for us to provide care while we know the state is always looking for ways to take us down."

A recent history of Missouri's abortion restrictions echoes that difficulty and frustration. An eight-week abortion ban passed in 2019 remains temporarily halted as Planned Parenthood fights the measure in a federal appeals court, but the law, if enforced, poses a considerable menace to abortion access in the state: A data analysis by RFT found the law would have banned more than 80 percent of the 3,903 abortions performed in Missouri in 2017, the last year when the state had more than one abortion provider in operation.

In 2020, the hits to abortion access kept coming. State health officials refused to issue an abortion license to Planned Parenthood's St. Louis clinic, and the organization spent months fighting a legal battle that eventually led to the state issuing the license. Missouri's 39 total abortions in 2020 represent a roughly 99 percent drop from the abortions recorded in 2017.

But even if Missouri can't permanently ban abortion, the goal seemed within reach for the crowd gathered on January 22 to celebrate the reports in the Post-Dispatch and Operation Rescue.

"In no other state in the union is anyone standing on their soil and able to say what we’re able to say," John Ryan, a well-known fixture in St. Louis' anti-abortion protests, told the applauding crowd. "Missouri is abortion-free."

It wasn't all celebration. Several speakers at the rally lamented the election loss of Donald Trump and described him as "the most pro-life president in our lifetime." Others echoed the false conspiracies that animate the militant core of some anti-abortion groups.

Troy Newman, head of the Kansas-based Operation Rescue, whose report on Missouri's "abortion-free" status had caught national attention, warned the crowd: "Baby parts have been sold on the open market and stuck in vaccines and put in potions to inject themselves for a euphoric high."

Paul Gewalt, head of Personhood Missouri, told the attendees that Missouri "is in the mop-up phase" of eliminating abortion completely.

"We have won this city. We have won this state," he said, though he too pivoted to an extremist position: "All vaccines, especially the vaccine for COVID-19, are tainted by unborn children’s cells."

The rally's final speaker, State Senator Mike Moon (R-Lawrence), has spent his legislative career repeatedly, and unsuccessfully, trying to ban abortion in Missouri outright. This year, Moon has already filed yet another bill to enshrine "unjustified homicide of an unborn child" into state law.

"The battle still wages, and we can't stop," Moon told the crowd. "Let’s get it done and abolish abortion in Missouri." 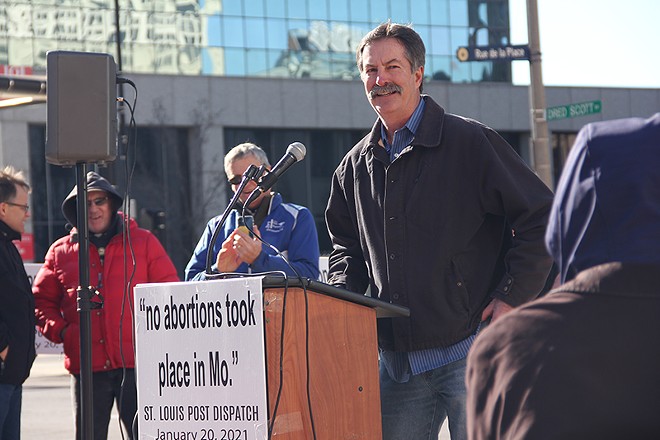