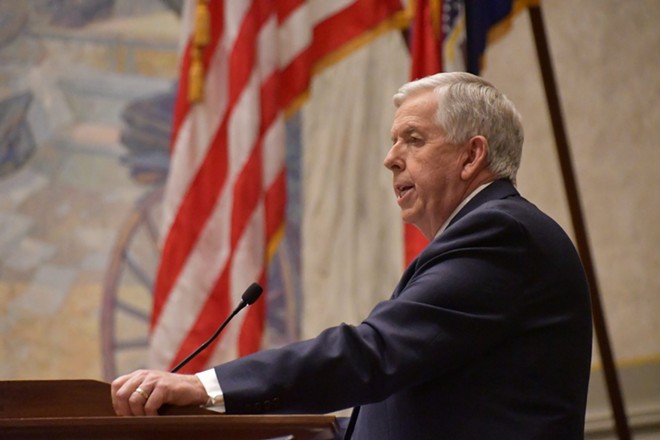 Missouri Gov. Mike Parson believes House Republican leaders’ decision against allowing a joint legislative session to convene last week amid a statehouse COVID-19 outbreak was a “purposeful and disgusting scheme to embarrass me,” he said in a three-page letter to lawmakers dated Jan. 29.

Parson was scheduled to deliver his annual State of the State address last Wednesday in the House chambers, with the Senate, statewide officials, his cabinet and other guests in attendance.

He was unable to do so, however, after numerous lawmakers and staff tested positive for COVID-19 and the House declined to allow the speech to go forward as originally planned.

Instead he delivered his address in the smaller Missouri Senate chamber.

In a three page letter to lawmakers, Parson said the House’s decision wasn’t about safety but was instead an “insider stunt and petty show of arrogance and political power.”

House Republican leadership could not be immediately reached for comment on the governor’s letter.

The night before his scheduled address, Parson notes in his letter, a House committee met in a crowded hearing room packed with witnesses and legislators.

“I could not understand why House leadership would condone such an unsafe hearing while preventing the State of the State from moving forward,” Parson wrote, “as we had taken every precautionary measure to limit unnecessary attendance, ensure social distancing and provide overflow viewing areas.”

Parson says he was informed Wednesday morning that he could deliver his speech to an empty House chamber, with his address live streamed for remote viewing.

Of the 32 governors who have either delivered or scheduled their State of the State addresses this year, 18 decided to forgo the pomp and circumstance of a joint legislative session because of COVID-19 concerns — including several Republicans.

Parson writes that as he was learning about the House’s decision Wednesday morning, the 163-member chamber was gathered to debate and vote on legislation.

He alleges House leadership purposefully withheld its plan from the governor’s office until the last minute.

“It is hard to see this as anything other than a purposeful and disgusting scheme to embarrass me and the Office of the Governor,” he wrote, though he never explicitly says why Republican leaders or their staff were trying to sabotage his speech.

House Budget Chairman Cody Smith, R-Carthage, previously told The Independent that Republican leaders met in House Speaker Rob Vescovo’s office as late as 11 a.m. to discuss whether a joint session was possible — and whether it would be safe. It was unclear if the Senate, which had at least three members quarantining, would be able to muster a quorum, which would be needed to convene a joint session.

Parson alleges House staff were working behind the scenes to insinuate that his push to deliver his speech in front of an audience was “about my ego.”

“I want you to know that we are all on the same team, and before this week, I would have never thought it was necessary to remind Republican members of that,” Parson wrote.

He then accused legislative staffers that he never names of trying to poison his relationship with the General Assembly to “benefit themselves, manipulate the truth and stay in power beyond the legislative term limits imposed on legislators they serve.”

“Please let our office know,” he wrote to lawmakers, “if you are interested and willing to collaborate.”