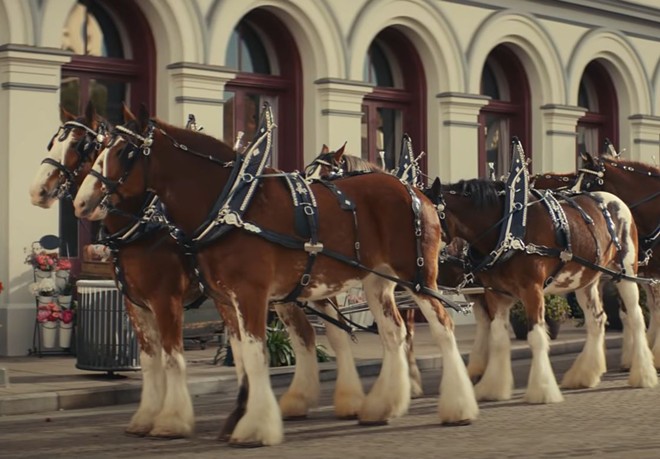 In a moment of corporate ethos, Budweiser announced on Monday that it would forego a Super Bowl advertisement and support coronavirus vaccine awareness efforts instead. This is the first time in 37 years that Budweiser won't be advertising in the game.

The announcement came in the form of a tweet from @budweiserusa and includes a 90-second video narrated by actress Rashida Jones. In the clip, people sing from windows, shoppers dance in stores, NBA players kneel in Black Lives Matter shirts, and nurses give thumbs up after receiving vaccinations. Throughout, a piano arrangement of "Lean on Me" by Bill Withers plays in the background.

According to Marcel Marcondes, Budweiser’s U.S. chief marketing officer, the company plans to donate $1 million to the Ad Council’s vaccine awareness efforts, then follow with more contributions in the future, Ad Age reported.

CBS, which is broadcasting this year's Super Bowl on February 7, has been selling its 30-second advertisement spots for $5.5 million.

Meanwhile in Massachusetts, the Samuel Adams' advertising campaign featuring the character "Your Cousin from Boston" will return to the Super Bowl in typical half-witted fashion, this time mocking the St. Louis-native beer brand for its long obsession with Clydesdale horses. Samuel Adams released the commercial online three days ago.

And, for something produced by Boston, it's actually pretty great.

It opens on a cobblestone road in a sunlit city. A team of Clydesdales, strapped to a wagon, jerk their heads and stand proudly. The camera pans back as an orchestra conveys the sense of awe and esteem. Then a man in flannel, sauntering by, pulls a pin from the wagon. The straps slide down from the horses’ backs, and the Clydesdales stride forward in reverent majesty — until one crashes through a stand. Pedestrians run in a panic. Outdoor-dining tables fall to the ground. “Ah, the horses!” someone yells. The wagon-driver is dragged through the street.

“I did not see that coming,” says the man in the flannel — the eponymous "Your Cousin From Boston" — as he holds the pin and a 12-pack of beer.

However lighthearted the tone, the ad could lead to litigation. Anheuser-Busch InBev has a trademark on the beer-hauling Clydesdales. As Ad Age notes in its report, other brands are "legally free to use images associated with competitors for comparative advertising," but those references can't be disparaging.

Then again, instead of suing Samuel Adams, Anheuser-Busch Inbev could rebut with their own spoof of "Your Cousin From Boston." Just hear us out: He could be a beer-bellied, Blues-loving, mostaccioli-devouring St. Louis everyman who says “Farty-far” and “Where'd you go to high school?” On Wednesday, he bowls. Thursday nights he’s at Imo’s. When it's Halloween, he shuts the door if children don't have a joke.

And when he sees a team of beer-hauling Clydesdales, he just admires them.

For the first time in 37 years, we aren’t running a commercial during the Super Bowl. Instead, we’re helping to safely bring America back together again soon. Watch to learn how. pic.twitter.com/vpfnqDoDMK