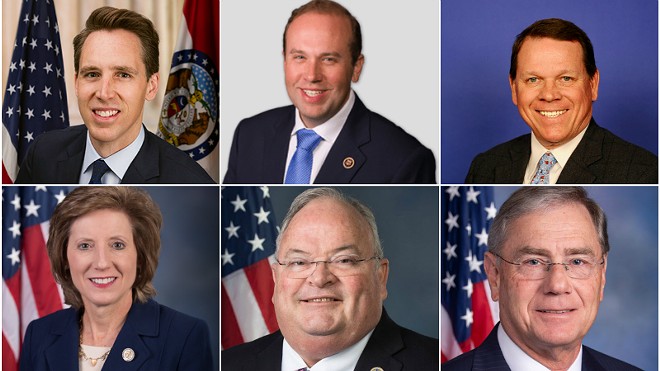 When police finally regained control of the U.S. Capitol after pro-Trump extremists stormed the building on Wednesday, six Missouri Republicans voted in support of the same conspiracy theories that inspired the violent insurgency.

The most prominent was Sen. Josh Hawley, who was the first U.S. senator to announce he would object to certifying the results of the presidential election. Despite recounts and more than 60 court decisions dismissing President Donald Trump's debunked claims of widespread voter fraud, Hawley claimed he was obligated on behalf of his constituents to object to the voting process, specifically in Pennsylvania.

On his way into the Capitol on Wednesday, Hawley was photographed saluting the same extremists who would later overwhelm Capitol Police officers, smash out windows and climb inside the building where they ransacked Congressional offices and celebrated the insurrection.

From our Francis Chung, Sen. Josh Hawley greeting protesters in the east side of the Capitol before riots began. pic.twitter.com/I8DjBCDuoP


The group had become convinced, despite all evidence, that the presidential election has been stolen. It's a message that Trump continued to peddle on Wednesday. And while a number of Republicans, which notably includes Rep. Ann Wagner and Sen. Roy Blunt of Missouri, chose to break with the president's unhinged claims and vote to certify the elections, Hawley and five U.S. representatives from Missouri objected once Congress resumed business Wednesday night.

Here's the list of the Missouri politicians who were among 147 Republicans to object to certifying votes in either Arizona or Pennsylvania:

Together, they followed a path that was sure to fail but score points with the far-right factions of Trump's base. Hawley was among just six senators, who ultimately objected. Fourteen had been expected to object, but the majority backed off.

Something about being forced to take shelter from a mob storming the halls of Congress seemed to have made most of the would-be objectors reconsider.