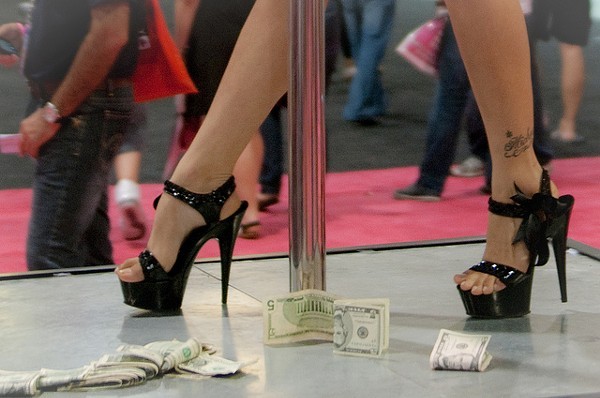 P.T.'s Centreville, a staple of the east side strip club scene for some 30 years, has closed permanently. The strip joint made the news official through a social media post Monday afternoon.

"It is with a very heavy heart that we announce that PT’s Centreville will not reopen," the post reads. "This was not an easy decision or one that we wanted to make. We want to thank you all for the love and support you have shown us for over 30 years."

The closure appears to be due to COVID-19 restrictions. The club has not been open since October 28, when it announced on social media that it would resume operations "once the Governor says we can reopen back inside at normal hours again."

And that would-be temporary closure comes after a string of similar ones as infection numbers have ebbed and flowed over the last ten months. P.T.'s Centreville initially closed at the start of the pandemic on March 16, with a cheerful note saying they'd be "ready to party in TWO weeks!"

Those weeks stretched into months as ownership experienced the same uncertainty as the rest of us — and, apparently, the same viewing habits, as a sign appeared in front of the club in April blaming the closure on "Carol Fuckin Baskin."

P.T.'s finally reopened on June 26. But the festivities were short-lived, and by mid-August, Illinois Governor J. B. Pritzker responded to higher rates of positivity in the area by releasing new guidelines for the southwestern portion of Illinois that stated that all bars — including strip clubs — must close by 11 p.m. to match the closing time in St. Louis.

"Thanks to the Governor’s one size fits all approach, we will be closed until we can open past 11 p.m.," reads a post on the club's Facebook from that time. "To put it simply, we are heartbroken that it has come to this. Please visit our sister club Diamond Cabaret St. Louis in the meantime. We will see you all when the Governor lightens up. "

The last days of P.T.'s came in October. The club reopened on October 16 with the resumption of late-night hours, closing each night well into the a.m. But that reopening would prove even more short-lived, with management shutting the doors again on October 28. They've been closed ever since, and according to today's news, they will remain that way permanently.

It's yet another blow to the east side's storied strip club scene, which has seen the closures of some of its longest-running and most well-known strip joints in recent years, long before COVID-19 stepped into the fore.

P.T.'s Classic, the Brooklyn-based club that was owned by the same group that owns P.T.'s Centreville, closed its doors in October 2016, rebranding as Black Magic, an "urban" club catering to Black customers which also closed shortly thereafter.

The following year, the Pink Slip, which had operated in Brooklyn for some 25 years, unceremoniously ceased operations as well. The wet and wild Roxy's, owned by the same group that helmed both P.T.'s locations, followed suit in 2018.

But though that may seem like a lot of closures in a short time — and to be fair, it is — there's still no small amount of debauchery to be had just across the river, as P.T.'s owners make clear in their farewell note.

"Take care," that note reads, "and be sure to visit our sister clubs Country Rock Cabaret and Diamond Cabaret St. Louis when they are permitted to reopen inside!"