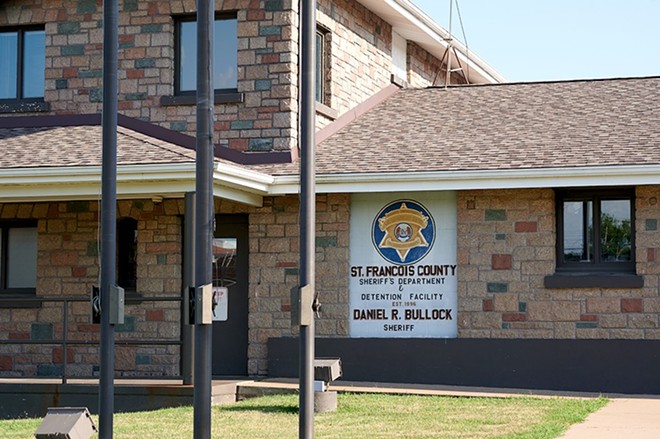 In the St. Francois County Jail, hunger was everywhere. Portions were small, or inedible or covered in mold. Detainee Robert Hopple watched as his cellmate squeezed toothpaste onto a square of toilet paper and swallowed it.

"He said, 'Here, try this, it helps with the hunger,'" Hopple would later recall to attorneys. "That's what we did in-between meals. We'd do that for weeks."

Hopple's account of starvation is among a trove of allegations leveled in a new federal lawsuit against the jail and St. Francois County Sheriff Dan Bullock. Hopple, along with two other former jail residents, are being represented by St. Louis civil rights firm ArchCity Defenders, in the suit filed on Monday.

Overall, the suit accuses the jail of failing to provide basic needs for the roughly 200 inmates crowded into a facility that had once been an operational dairy farm. Along with lack of ventilation and access to medical supplies — including hygiene products like tampons and pads — the lawsuit also accuses guards of pitting detainees in violent contests called "Friday Night Fights."


These fights were also described in a July 2020 Riverfront Times cover story published in partnership with The Marshall Project. The story, which was based on interviews with 50 former detainees and four former employees, reported on allegations of the jail's widespread neglect, extreme heat and cold, and the Friday ritual that involved guards arranging "two-man duels, often to prepare men for state prison."

Like Hopple, other former detainees reported losing significant weight due to the quantity and quality of the institutions' food. But Hopple's journey to the jail had been tangled in the deeper criminal justice abuses in St. Francois County: In 2015, he'd been arrested on suspicion of child sexual misconduct, and although the state Child Abuse and Neglect Review Board ruled that the allegations were "unsubstantiated," St. Francois Prosecuting Attorney Jerrod Mahurin took the case to a grand jury, which returned an indictment.

What happened to Hopple next became the subject of a 2018 report by St. Louis Post-Dispatch columnist Tony Messenger, whose investigation that year into Missouri's de facto system of debtors prisons would earn him a Pulitzer Prize. As Messenger reported, Hopple lost his job and, as a result of Mahurin's many court delays, was forced to pay for an ankle monitor for months on end.

In 2018, when Hopple no longer had the means to pay, he was thrown in jail for violating the terms of his probation. The charge of child sexual misconduct was later dropped. (Also in 2018, Mahurin himself was accused of sexual harassment by multiple employees. He lost his reelection bid later that year.)

Along with ArchCity Defenders, the lawsuit is being brought by Farmington lawyer Vonne Karraker, who has spent years criticizing the conditions at the jail. She'd also represented the family of Bill Ames, who died in jail in 2019 after being strapped into a restraint chair and left for hours.