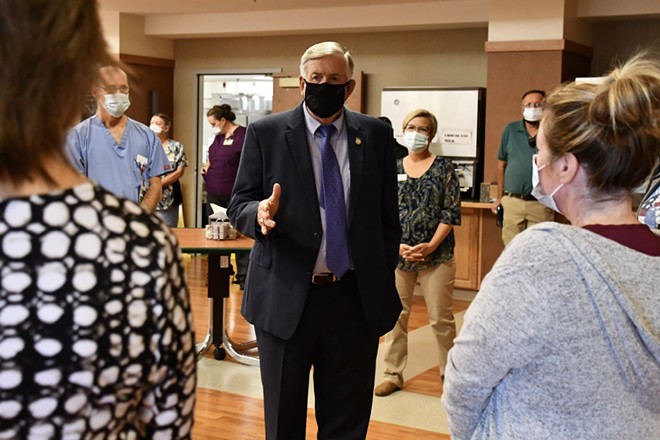 The state did too little too late to prevent or slow COVID-19 outbreaks that have killed more than 100 residents in Missouri's veterans homes, an investigation has found.

Through the early months of the pandemic, the seven long-term care facilities that are under the watch of the Missouri Veterans Commission appeared to be a model of coronavirus management, says a report from Armstrong Teasdale LLP, a St. Louis-based law firm hired to handle a review of operations. The MVC's leadership acted quickly in March to stock up on personal protective equipment, shore up supply lines and change procedures, including banning outside visitors.

Even as the virus began spreading through the state in the spring and early summer, the commission reported just one case — a veteran in St. Louis.

"Unfortunately, MVC Headquarters was lulled into a false sense of security and failed to capitalize on its early successes," the report says.

In late August and early September, the first signs of what has become a deadly outbreak now hitting all seven facilities began to pop up in homes across the state. On September 2, a single positive case at the Cape Girardeau home had spiked to three cases within 72 hours among veterans. Five positive staffers increased to seven within two weeks.

The numbers were still small, and the commission's administrators "failed to appreciate the need to move quickly to isolate positive patients," the investigation found.

In mid-September, the state still hadn't recognized what was happening. Gov. Mike Parson and his wife Teresa toured two homes, including a September 15 visit to the Mount Vernon facility where the governor spoke in person to staff. He later tweeted out photos from the trip. During a news conference the next day, he praised the work being done to protect the former soldiers.

Our Missouri Veterans Homes have been working hard to keep our nation's heroes safe and healthy through the COVID-19 pandemic.

Today, we thanked the staff at Mount Vernon Veterans Home for their dedication to our vets. pic.twitter.com/w8ELl6NYj8


Within two weeks of that visit, a full-fledged outbreak was underway in Mount Vernon with 31 of its 150 residents testing positive. Parson and his wife also contracted the virus, announcing on September 23 that they had tested positive. A spokeswoman for the governor told the Riverfront Times in late September that there was "no connection" between the spread of the virus in the homes and the Parsons' visit.

Part of the problem in the homes was that their leadership in the commission was slow to respond — even as information about the virus improved, experts predicted a fall surge and staff at the homes reported concerns about rising cases.

The MVC administration didn't raise any concerns other than staffing levels during regular meetings with the state's Fusion Cell, the group of state department leaders formed to coordinate the state's COVID-19 response. And even when they reported additional cases, no one in the Fusion Cell asked any follow-up questions, the report says.

The MVC is largely autonomous in state government. It is technically under the watch of the Department of Public Safety, but it operates primarily on its own, with the authority resting with a volunteer board of commissioners who have little hands-on oversight of the daily operations within the veterans homes, Armstrong Teasdale's investigators noted.

During the early months of the pandemic, when MVC administrators could have been preparing for a plan to deal with an outbreak, they just continued doing what they had been doing since March, largely ignoring what was happening at other facilities across the country and even in their own nursing homes.

Veterans, even some with COVID-19 symptoms, were allowed to continue mingling with other residents, eating with them in dining halls and sharing rooms while they awaited test results. Staff members also continued with their duties while awaiting tests, despite evidence from across the country that the majority of people who turned out to have the virus showed no symptoms at the time of their tests.

"The lack of a comprehensive outbreak plan led to confusion and inefficiencies, and it almost certainly contributed to the inability to contain the spread of COVID-19 once it was introduced into the Homes," the report says.

When the virus hit in earnest, all the mistakes and squandered opportunities of the previous months became obvious, setting off a cascade of problems the facilities weren't equipped to handle. In one example, the report notes that the MVC administration failed to set aside anywhere close to enough beds in which patients could quarantine, resulting in "at least one isolation area filled with fifty patients in one week."

Staff shortages increased so quickly that by the time the MVC recognized it was a bad idea to have staff caring for vets in multiple units, it was too late to reverse the mistakes. There just weren't enough employees to split between COVID patients and other parts of the homes because there was no one else to fill their spots.

It wasn't until the first week in October, more than a month after the first signs of an outbreak, that Parson ordered the review of operations and began to take emergency steps, such as providing additional tests, to stem the spread.

When Armstrong Teasdale's team began looking into problems and taking calls from vets and their families through a hotline they set up, they encountered a dismal scene. Stressed-out staffers had been left to deal with the fallout of the administration's failed preparations, "and many are overwhelmed by the emotional toll of caring for COVID-19 affected Veterans, the negative media attention, and the added demands of COVID-19 protocols — especially when many of them live in Missouri communities where mask mandates and social distancing are not enforced."

But the saddest anecdotes in the report describe the veterans isolated from families as the virus rampages through the homes. The investigators report widespread loneliness, depression and atrophy.

"The Veterans are alive, but not living," the report says.

The prolonged separation from relatives while the state reacts to outbreaks coincides with emotional carnage — some vets have "stopped talking and eating, several cry ..." Others now require wheelchairs for the first time or grow confused when loved ones no longer show up.

Family members also told auditors they worry about the medical care, noting that they often helped communicate with doctors during checkups and helped with numerous small tasks, such as coaxing vets to eat, cleaning out their ears so they could hear better, brushing their teeth and trimming their eyebrows.

The report writers suggest creating protocols that would allow limited numbers of designated family members to visit, reasoning that with the right precautions the risk would be no greater than interactions with staff members.

The report emphasizes that the investigators found that staff and MVC leadership care deeply about the vets in their care but have been overwhelmed by failures by the administration to recognize or prepare for the length and severity of the pandemic.

The investigators offer a series of recommendations, including developing outbreak plans, coordinating with outside agencies and implementing updated protocols for caring for infected residents and preventing the spread of the virus.

"Ordering this rapid independent external investigation is only the first step in a series of future endeavors the MVC and other external stakeholders should take in order to ensure the protection of the Veterans under their care," the report says. "It is our hope that these findings and recommendations will serve as a launching point of positive change for those who deserve it the most."