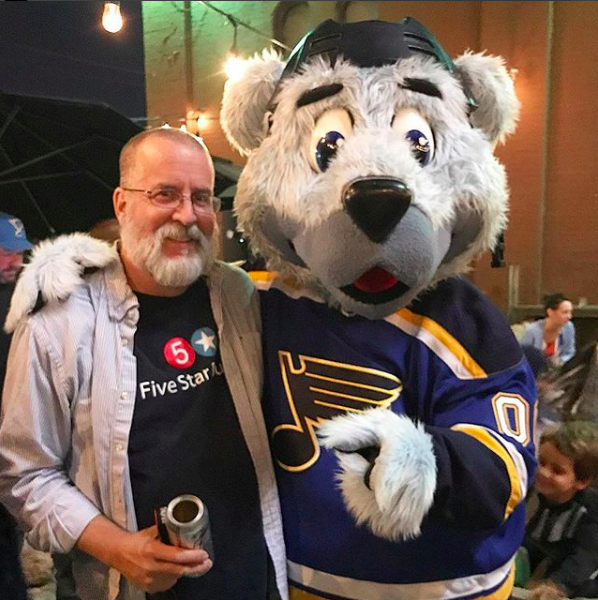 An East St. Louis man who swiped a truck in 2018 during a violent confrontation and then ran over Gus Gus Fun Bus owner Mike Arnold has been sentenced to twenty years in federal prison.

Curtis Alford, 22, pleaded guilty to one count of carjacking resulting in death.

Arnold was a longtime AAA employee but was best known for ferrying revelers between bars and restaurants in his popular party bus. He endeared himself to St. Louis' chefs and barkeeps because he was a relentless champion of the region's bars and restaurants.

On June 16, 2018, he was characteristically in the city's center for the Taste of Downtown STL food festival. Authorities say he spotted the carjacking, pulled out his cellphone and tried to shoot a photo.

Alford had spotted two other festival-goers as they put money in a parking meter and attacked. He pepper-sprayed the two and wrestled with them for the keys to their pickup. According to the U.S. attorney, Alford grabbed one of the victims by her hair and neck, dragging her to the sidewalk before he snatched the keys and bolted for the truck.

Alford fought off one of the victims while he started the truck and drove off. Arnold, who was in the street, tried to get out of the way, but Alford drove over him and dragged him before jumping a curb and hitting another person and a fire hydrant.

Alford then drove around the corner and picked up an accomplice, Jana Stowers, but they didn't make it far. Authorities say Alford drove at a crowd that included two police officers at the corner of Seventh and Chestnut streets, forcing them to flee. He then crashed and was taken into custody.

Arnold survived for several days in the hospital before he died. He and his wife Suzanne Arnold had eight children between the two of them.

“My heart breaks for the Arnold Family and I greatly appreciate the cooperation of the other victims. This is a senseless tragedy,” U.S. Attorney Jeff Jensen said in a news release. “Curtis Alford deserves every day of his sentence.”

"The loss of Mike is always with us and that will never change. This day is about what the defendant took from all of us. However, now we may be able to move past the criminal aspects of this terrible event,” Suzanne said. “More than anything, though, I hope we can remember all the beautiful things Mike was to us. Hopefully he gets the justice he deserves."

Molly added, “My dad was such a major part of this community and of my family. It's been over two years of trying to get past the responsibilities that came along with his death. When the pandemic required shutting down the courts, I felt like we'd been thrown back into uncertainty and this looming last loose end wouldn't get tied up any time soon. It feels now like we can grieve the way we were meant to grieve. Thinking only of Dad and not worrying about whether we will see justice, if our statements are ready, and what our next steps have to be. I appreciate the love and the support that we've received from so many, and I appreciate that I find myself coming across kind words and happy memories even now. It has helped us to get through the hardest parts of this, and I'm so grateful for that. The fact that people still honor him over two years after his death is a true testament to the kind of person my father was. The love that he sowed reaches farther than I could have expected and it continues to grow through the community. It's a legacy that most dream of."

Alford's accomplice Stowers has pleaded guilty to carjacking and is scheduled to be sentenced later this month.