How St. Louis Adjusted to a Pandemic Thanksgiving in 1918

Separated by a century and several wars, the St. Louises of 1918 and 2020 do have one thing in common: Telling residents and businesses to shut things down for Thanksgiving amid a global pandemic.

Indeed, in November 1918, St. Louis was just one of many cities facing the devastating second wave of the so-called Spanish Flu, which, in just October of that year, had killed 195,000 Americans. The spread triggered face mask orders and, as St. Louis newspaper coverage from the time attest, emergency closures of schools and restrictions on public gatherings.

A new video from the Missouri History Museum captures a slice of that era, drawing on news accounts to describe the regulations imposed in 1918 under the direction of St. Louis Health Commissioner Max C. Starkloff.


According to a report in the November 28, 1918 edition of the St. Louis Star and Times, Starkloff announced 760 new cases of influenza, "a new high record," and ordered that "schools, public and parochial, were closed, the attendances of children at Sunday schools prohibited; all non-essential gatherings stopped and stringent rules for street car ventilation adopted."

It was far from the first shutdown order that St. Louis officials imposed on businesses and public life that year. 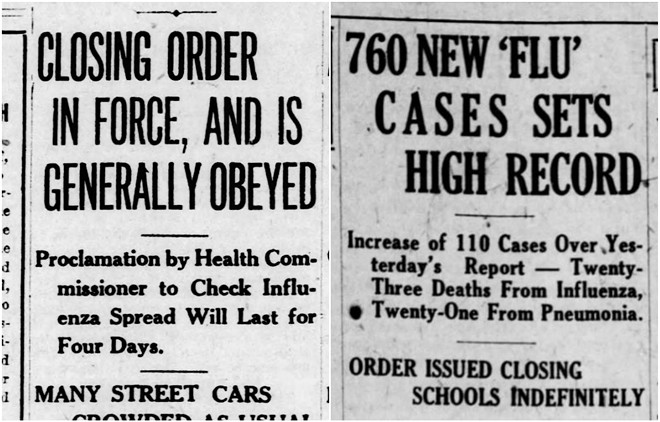 Two weeks before the Thanksgiving Day announcement, on November 9, Starkloff had issued a four-day closing order for non-essential businesses. The order, which was published in the pages St. Louis Post-Dispatch, was described as being "generally obeyed," according to a later story, which noted that the restrictions "virtually suspended all commerce in the downtown section."

That order listed 37 "essential industries" allowed to remain operating during the shutdown, including coffin manufacturers and railway offices.

But two days later, with the shutdown still in place, St. Louis crowded the streets in celebration of the end of World War I. Police would ultimately make 22 arrests of saloonkeepers, each "charged with violating the Health Department influenza closing order" by staying open, the Post Dispatch reported on November 12.

It all sounds eerily similar to St. Louis' coronavirus-impacted Thanksgiving of 2020.

On Tuesday, the St. Louis County Department of Public Health issued a public advisory asking people not to travel and to avoid sharing a meal with people outside your immediate household. The county's shutdown orders against indoor dining have prompted health officials to write cease-and-desist letters to dozens of bars and businesses flouting the "safer at home" rules.

And sure, St. Louis of 1918 was made of stern stuff. Its people had just gotten through a world war. Today, St. Louis is re-learning those same lessons — and figuring out how to mark a Thanksgiving like no other.