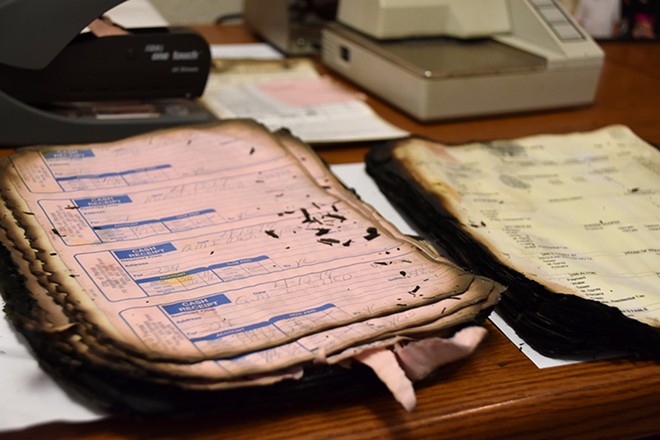 The ex-mayor of a town in Missouri's Bootheel has been charged with multiple felonies nineteen months after she left office on a night of mysterious fires.

Tyus Byrd, 45, was the first Black mayor of tiny Parma, a groundbreaking event that made national headlines in 2015, largely because the majority of the town's white employees, including the police chief and officers, quit after she won the job.

For some, Byrd became a pioneering figure as she battled threats and racism that poured in after she landed in the national spotlight. But her tenure ended in controversy and accusations. A whistleblower's complaint in 2018 led to a review by the state auditor, which found what were described as credible concerns, but Byrd was able to hold off a formal state investigation while she was in office. When she lost her bid for reelection in 2019 to 83-year-old Rufus Williamson Jr., the incoming administration contacted the state about inviting them in for an audit.

The Riverfront Times covered the controversy in Parma in a July 2019 cover story.

State Auditor Nicole Galloway said in 2019 that they were awaiting the formal request for an audit from newly elected city leaders when, on the night Williamson took over during a tumultuous town meeting, fires burned Byrd's family home to the ground and torched offices in City Hall where the town's computer and a number of paper financial records were stored.

Williamson, who became Parma's second Black mayor, told the RFT in 2019 that Byrd hadn't even given him the keys to City Hall during the transition, claiming during that night's meeting that no one could find them. Hours later, he got out of bed to find the one-story brick building and Byrd's house on fire.

State auditors and a former town clerk, who left early in Byrd's tenure after the two clashed, salvaged a number of records from the ashes and worked through bank records, credit card statements, vendor bills and whatever documentation they could recover. The reconstructed financial picture turned up $115,000 in missing money.

Galloway described it as "blatant corruption" when the audit report was released in July of this year. Auditors alleged the money in question included $24,960 in overpaid salary to Byrd, $17,686 overpaid to Helen Frye (the clerk for much of Byrd's tenure) and $975 to Parma's water supervisor, Byrd's relative David Thatch. Byrd also received $22,321 improper payments from city funds and made $11,249 suspect purchases, drawing from city accounts, auditors said.

None of the three are charged in the fires. Ex-New Madrid Sheriff Terry Stevens, who led much of the arson investigation before he retired, previously told the RFT that the City Hall fire was almost certainly intentionally set. It was the second fire of the night and seemed to have begun while firefighters were busy down the street with a blaze at Byrd's house. The mayor's house had burned to the ground, but firefighters were able to extinguish the flames in City Hall before they destroyed everything. At the time, Byrd was staying most of the time with her husband about 90 miles away in Jonesboro, Arkansas.

Investigators found multiple places where the fire began in City Hall, a tell-tale sign of arson, Stevens said. But arsons are notoriously hard to solve. The timing of the twin fires was highly suspicious, but any evidence of how or where the fire at the mayor's house started likely burned up, Stevens said.

When he last spoke to the RFT in July, the former sheriff said investigators had a couple of suspects but they were hitting a wall on the fires. He wasn't sure if they'd ever have enough evidence to charge anyone.