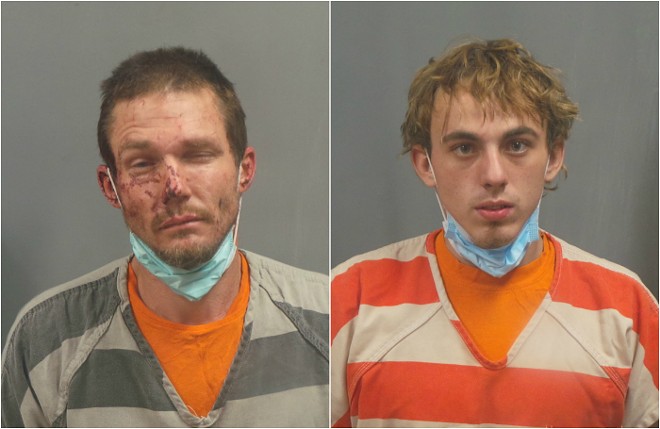 Two Jefferson County men caught in the act of stealing a tractor led sheriff's deputies on a wild truck chase before they were arrested, authorities say.

Jefferson County Sheriff's deputies responded on Sunday to Dittmer for reports of theft in progress and found Gregrey Tyler, 22, and Jesse Bell, 40, loading the Ford tractor onto a trailer hitched to a 1992 Chevrolet C/K 3500 pickup, according to an incident report.

As soon as a deputy hit the lights and siren, Bell and Tyler bolted, pulling away as the tractor slipped off the trailer, deputies say. Bell was driving and Tyler was in the passenger's seat.

With deputies trailing behind, Tyler turned around and fired three shots, missing each time, according to an incident report. The vehicle chase continued for several miles, into Washington County, until spike strips popped the truck's tires. Bell and Tyler bailed out and ran off on foot before they were finally taken into custody, according to a sheriff's department news release.

The truck had been reported stolen from Jefferson County.

Asked about Bell's scraped-up face, a sheriff's spokesman said he seems to have fallen into a wood pile as he ran before jumping up and running through thorny underbrush in the trees, where he was arrested.

"There was no use of force in this situation other than the spike strips used to disable the stolen truck," sheriff's spokesman Grant Bissell told the Riverfront Times in an email.

Bell and Tyler were jailed without bond on multiple charges, including first-degree assault, stealing and resisting arrest. Both men were already facing charges from other alleged thefts.