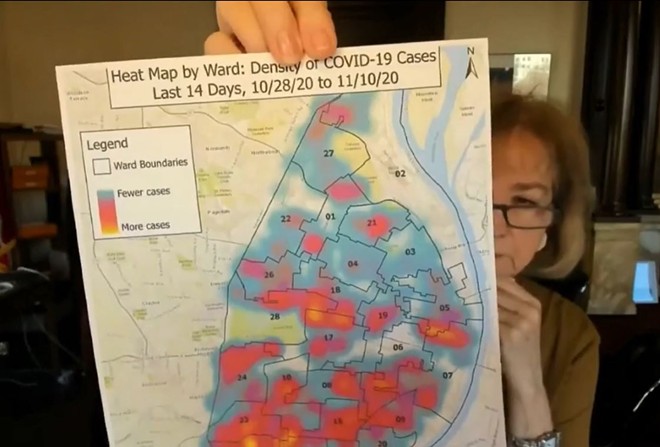 The St. Louis metro region is suffering a surge of COVID-19 cases and hospitalizations — and while things aren't quite as bad in St. Louis as the surrounding counties, Mayor Lyda Krewson made it clear in a Wednesday briefing that the city is trending in all the wrong directions.

Krewson noted that while the city's average daily rate of new cases is "significantly lower" than those in St. Louis County, St. Charles County and Jefferson County, she added, "Don't take that to mean they're good here. They're not."

"They're bad in the city also," she said.

On Tuesday, St. Louis reported record-highs for new hospitalizations. The seven-day moving average admissions and hospitalizations are also at peak levels, surpassing the rates seen during the beginning of the pandemic.

Krewson noted that hospital data (which is reported with a two-day lag) shows nearly 800 people hospitalized in the region's four major medical centers.

Other hotspots appear in the Central West End and downtown. While those are densely populated areas, Krewson said that contact tracing by city health officials, "have concluded that this spread is really happening in neighborhoods, between neighbors, in close families."

Krewson acknowledged that the city government "cannot control" the ways its residents socialize and gather, but the mayor still urged people to "curtail your social activities" and to restrict in-person interactions to small groups of no more than ten.

The mayor praised residents for "by and large" following the city's mask mandate, but she also warned that the current rate of new hospitalizations is "unsustainable."

Krewson's warnings didn't go as far as St. Louis County Executive Sam Page, who on Monday addressed the county's surge in new cases and hospitalizations in stark terms, saying, "If this doesn't change a week or two from now and we're standing here with the same rate of increase, then we will have to be considering more restrictions."

Asked about the possibility of new restrictions, Krewson did not specifically address what rules may be on the table. She said that the previous restrictions had "devastated" businesses and the city's hospitality industry. But unlike the earlier shutdown, Krewson said that businesses may have to survive the next one without access to federal aid through small business subsidies and unemployment payments. Those federal programs expired and have not yet been renewed. Krewson described the lack of federal resources as "one of the biggest worries" for the city's future pandemic response efforts.