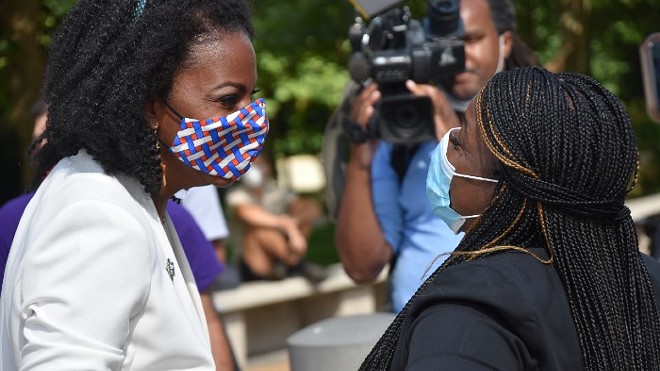 Jones plans to make her formal, in-person announcement at a rally this afternoon. The none-too-surprising news sets up a rematch with Mayor Lyda Krewson, who slipped past Jones in a crowded Democratic primary in 2017. Alderwoman Cara Spencer has already begun her mayoral campaign, which put three of the city's best-known political figures on a collision course for 2021.

It'll be an intriguing race in part because it will be the first under a newly voter-approved change to the municipal election system. With the passage of Prop D yesterday, St. Louis is set for a non-partisan primary during which voters will pick candidates — as many as they like — regardless of party. The top two finishers will then compete in the general election in April 2021.

If that system had been in place in 2017, there's a chance Jones would already be mayor. Krewson won the Dem primary that year with 32 percent of the vote, compared to Jones' 30 percent. Nobody else was close, but several other big-name candidates (including Board of Aldermen President Lewis Reed, aldermen Antonio French and Jeffrey Boyd) split up votes that might have gone to Jones if she'd faced Krewson one on one.

Jones has been the treasurer for eight years and was previously a state representative. A news release announcing her candidacy says, "She will draw from her own experiences as a single mother, the struggles of St. Louis' everyday families, and the needs of our most at-risk neighbors to create a platform to which everyone can say YES."

Jones plans to formally kick off her campaign at 2 p.m. at Ivory Perry Park, north of Delmar Boulevard and Belt Avenue.