It is election night on Cherokee Street. Donald Trump's severed piñata head stares out from behind a restaurant window. His is mouth is a rounded grimace, his eyes rageful and lumpy.

Trump's piñata body is no more; the limbs and torso were torn apart by children in a candy-spouting public spectacle in the leadup to the 2016 election. On this night, Trump's head is perched on a table inside Yaquis, the restaurant whose owner commissioned the effigy. The position gives piñata Trump a perfect view of the PBS NewsHour broadcast being projected onto the face of a building across the street.

It's not even 7 p.m., and, in the absence of information, hope and booze are taking its place. A modest crowd sits on folding chairs, drinking and eating in between refreshing their Twitter feeds. A cloud of marijuana smoke billows from a middle-aged man standing next to a Cori Bush campaign sign. Above him, the early results from Georgia flash against the brick backdrop.

The sound of a whistle blow breaks the ambiance.

Dressed in a black shirt that states "Sorry about our president" in multiple languages, Cantada holds a beer in one hand and the whistle in the other. The early returns show Biden with a twelve-point lead in the critical swing state. Cantada raises the whistle to his lips and unleashes another trill.

"It's still early on, but it's a good, optimistic sign," he concedes. "That's the spirit I'm going for. The energy of tonight is definitely optimism."

Cantada returns the whistle to his pocket, replacing it with his phone. He lights up a cigarette. He adds, "My next whistle is going to be when Florida posts. I think Florida is the pacesetter to the whole evening."

Despite Cantada's burst of optimism, his whistle doesn't return for an encore performance. Florida goes to Trump. Biden's lead in Georgia narrows and evaporates amid delays and equipment problems. Those gathered for the watch party stare at their phones, tugging at the feeds like a cat pawing at a toy just out of reach. The energy turns to a sour tension, with a menace of familiarity.

Four years ago, a crowd had watched election returns on this same spot just off Cherokee, drinking and chatting away their nervousness as the night steadily rolled toward ruin for Missouri Democrats. This year, that story played out much the same way, with the state's Republicans holding on to the offices of governor, attorney general, and secretary of state; Republicans also notched key victories for State Rep. Andrew Koenig and U.S. Rep. Ann Wagner.

But history doesn't always repeat itself, or, at least, not the same way. On the night of November 8, 2016, an impromptu protest march broke out on Cherokee. It wasn't much to look at, just four people marching and calling "Out of the bars and into the streets!" to the depressed-looking bar patrons still watching the returns that showed Hillary Clinton's defeat.

This year, the protesters have a new plan. They aren't on Cherokee Street, but three miles north, setting up chairs and tables around the Firefighters Memorial in Poelker Park. With City Hall looming behind them, the attendees connect laptops to projectors. A table is piled with boxes of donuts and lunch bags.

This is Resist STL. They are here for one thing: To stop Trump from stealing the election.

For the last month, members of Resist STL have signed up for virtual training sessions on everything from occupying a building to first-aid to making banners for use in street protests. The watch party isn't just for tracking the election results, but as a staging ground against a possible coup — though,  at a glance, these attendees seem no less fixated on the returns than the people drinking the night away on Cherokee.

The difference, says Keith Rose, is that Resist STL members are ready to act:

"What I've noticed is that every time the president does something, people would be so tied to just scrolling their newsfeed, watching the country fall apart in real time, and no one would get out of bed to actually do something."

Rose was the ringleader of the small group of protesters that marched along Cherokee Street in 2016. At the time, the demonstration was "a reminder," he says, "that we don't have to sit down and watch. We can actually try to impact this." Rose adds, "That's what Resist STL is doing."

On election night, however, there's just not a lot for Rose and Resist STL's members to do. In absence of the boozy distractions offered at the Cherokee watch party, the resisters gathered downtown eat donuts, play cards and linger around a projection screen showing the current election map. 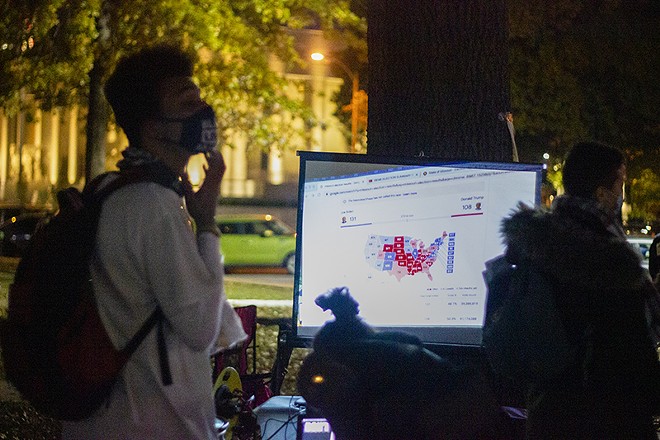 Among them is Tori Jameson, a pastor at Lot’s Wife Trans & Queer Chaplaincy and the organizer behind a series of "pop-up" weddings at City Hall last month. The matrimonies, sixteen in all, served as a protest against the Supreme Court confirmation hearings for Amy Coney Barrett.

Tonight, though, as the pastor watches the election results come in, Jameson expresses nervousness at what the future holds, calling it, "both hopeful and terrifying in the same moment." They point out that, even if Trump loses, the nation's highest court could attempt to roll-back access to marriage equality, not to mention reproductive rights.

"I serve trans folks primarily," Jameson notes. "I think that continued Republican administration, nationally and locally, is no good for our rights."

It was those rights on Jameson's mind when officiating the weddings of those sixteen LGBTQ couples in October. Even though Barrett was confirmed, Jameson contends there's real value in the kind of "joyful resistance" the weddings put on display. The pastor gestures to the crowd behind them.

"There are so many ways to participate and contribute to resistance. This is our family in the streets, so in that way it's joyful."

But as the night lengthens, there is little joy found in the election watch parties downtown and on Cherokee Street. As Missouri's Republicans celebrate, Trump and his enablers are attempting to claim victory in just the way that observers feared they would: Before all the ballots are counted.

For Missouri voters, then, the election is over. But for the resisters, the real contest may only just have started.