Election Day Questions? An Army of Lawyers Is Ready to Help

If things get weird when you try to vote, a small army of Missouri attorneys is ready to help.

The Missouri Voter Protection Coalition, a year-round effort, has been staffing up with volunteers for November 2 and 3. They're actually available right now. Call 1-866-OUR-VOTE (8683), if you want help creating a voting plan or have any other voting-related questions.

But they're expecting big numbers of calls on Election Day. Combine one of the most contentious general elections in generations with a variety of pandemic-related changes, such as consolidated or relocated polling sites, and people can't help but have questions.

That doesn't mean you should freak out. The attorneys are there to take the anxiety out of casting your ballot (well, they can't help with the outcomes of the races; they're non-partisan). Denise Lieberman, general counsel for Missouri Voter Protection Coalition, has been working on voter access for two decades and is widely considered the go-to source for what's happening at the ground level.

"This year, the program is larger and more robust than ever," she says.

Lieberman says they divide the operation into teams. They'll have their hotline team of attorneys who answer the phones and can answer a variety of questions — anything from info about polling locations and curbside voting to what to do if you've decided to forego your mail-in ballot and vote in person. 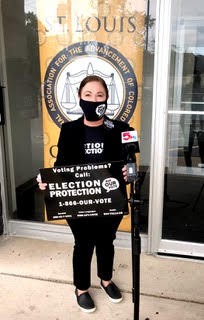 There is also a ground team. The Missouri Voter Protection Coalition has signed up more than 1,000 poll monitors to keep tabs on what's happening in real time. That includes people assigned to specific sites, but there will also be rovers, ready for a rapid response if they need eyes and ears at a spot they're not already covering.

New this year are social media monitors who can direct people to verified, accurate information online, which is more of a challenge than ever with a flood of misinformation directed at voters.

"They're also being trained on how to identify and respond to misinformation online without amplifying it, which is also incredibly critical," Lieberman says.

At the top of the structure is the "escalation team," which includes captains of the various units. If there is a question that is particularly tricky or an issue that is popping up repeatedly among any of the teams, Lieberman and the escalation team can take it on and direct resources.

For example, if attorneys working the hotline hear about voter intimidation at a polling location, they would let the escalation team know. Lieberman and the captains could then contact poll workers on the ground to check it out or dispatch a rover to observe and report back. If needed, ground team members can take voter statements and document what's happening right there.

Once they've verified a problem, the escalation team can move swiftly on a solution. That may involve contacting local election officials or even law enforcement. Lieberman says that because the Missouri Voter Protection Coalition does the legwork (often literally) to verify information, they have a lot of credibility with outside agencies.

"We've already sat down with the election directors of St. Louis city, St. Louis County, St. Charles County. We've sat down with the FBI, the cyber crimes task force, the United States Attorney's Office," Lieberman says. "We've talked through protocols for Election Day, and we all have each other's cell phones. We've already discussed, 'If this issue comes up, here's who's going to call you. Here's how we want you to handle it.'"

For most issues, the coalition can handle it themselves or with their contacts. But if they need to get the courts involved, they're ready for that, too. Lieberman has been involved in the dramatics of Election Day litigation, including helping with a suit in 2000 that kept polls open in St. Louis and ensured voters weren't wrongly turned away.

Part of the coalition's prep for this year has been trying to anticipate potential issues and do the research early so they can be ready with emergency litigation if needed.

One tip from Lieberman: Don't expect results on election night. There are likely to be delays. That just means the votes are being counted, she says.

The Kansas City, Missouri-based law firm Stinson LLP has hosted a call center since 2018, handling calls from Missouri and Kansas. That's more of a challenge during the pandemic. Attorneys from the firm are still helping to coordinate volunteers, answer phones and facilitate the hotline, but the command center is virtual this year.

The Missouri Voter Protection Coalition is part of a national organization, which staffs up with state-specific attorneys. So if you call the hotline from Missouri, you'll speak with a Missouri attorney who knows the difference between St. Louis and St. Louis County.

Stinson attorneys Brittany Barrientos and Ashley Crisafulli have both served as captains for the coalition. The call center handled 1,200 calls during the general election in 2018, and they're expecting a surge this year.

They've increased the number of volunteer slots to 300, which translates to 50 or so attorneys at a time working four- or five-hour shifts on the phones on November 2 and 3 — about double the number on hand for previous elections.

"There's a lot more confusing issues that are new," Barrientos says. "You have a lot more mail-in ballots. You have absentee ballots from people that haven't traditionally cast those. You have curbside voting issues. You have sanitation and hygiene questions coming up, so a lot of new issues just because of COVID. We expect it to be really busy on November 2nd and 3rd."

It can sound like a lot, but the attorneys can help you make a plan and walk you through any issues that pop up.

"There's nothing better than on Election Day when you have a voter on the phone who is frustrated and just wants to participate in their basic right and being able to help them make sure their vote gets cast," Crisafulli says. "It's such a rewarding experience."