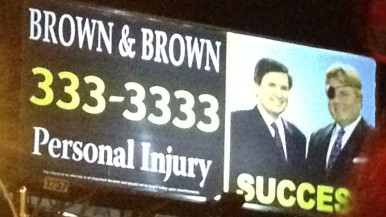 Ed Brown, an attorney famous in St. Louis for his distinctive look and late-night infomercials, was found dead yesterday after apparently jumping to his death from his high rise office building.

Police say they received a report that someone had jumped from the building at 1 S. Memorial Drive, which is downtown, just west of the Gateway Arch grounds.

Upon their arrival, a police investigation “revealed the victim sustained fatal injuries after he jumped from an 11th floor balcony and landed on a lower roof that is accessible from the third floor.”

"We are shocked and devastated," said David Shulman, a representative for Brown & Brown. "We request the privacy of the family is respected during this most difficult time."

Ed Brown’s personal injury and criminal defense law firm, Brown & Brown, was formed with his brother Dan in 1993. The brothers became St. Louis icons as a result of their smart marketing techniques, including billboards, infomercials and catch phrases. (“If you can’t come to us, we’ll come to you.”)

Police say the investigation into the passing of Ed Brown is ongoing. We’ll keep you abreast of any developments.