The saga of a self-proclaimed priest who spent several years in Missouri — where he was accused of stealing from his followers — is the subject of a new podcast that last week wrapped up its nine-episode run, culminating in a rare on-the-record interview with Ryan Scott-Gevelinger.

Gevelinger, who goes by "Father Ryan," has traversed a dizzying history of identities and angles. The podcast, Smokescreen: Fake Priest, reaches deep into the mysteries at the center of this conman's ability to avoid the legal consequences for his actions.

The series follows the 30-year trail of criminal charges, victims, news reports, and church communications. Along the way, it tells the story of a person whose facade of ultra-traditional Catholicism attracted a loyal group of elderly women, "nuns" who followed him across the country while bankrolling his churches and lavish spending habits that, at one point, even included maintaining a herd of llamas.

At the center of the series is the question frequently repeated, in tones of exasperation, by host Alex Schuman: Why isn't this guy in jail?

"You go into a con story knowing that it's about people being tricked, but you realize how emotional and deep it was, how personal some of these crimes are," says Schuman, an investigative reporter from central Iowa.

Schuman spent years investigating Father Ryan before finally meeting him in-person for an interview last month, during which the fake priest insisted that he'd been secretly ordained but, crucially, also admitted that he'd been previously kicked out of seminary.

Despite the holes in his bonafides, Father Ryan has never seemed to lack for followers. Even with decades of public denouncements from church officials across the country, including those in the dioceses in Jefferson City and St. Louis, he always managed to find people willing to support his lifestyle.

"You realize how emotional and deep it was," Schuman says, describing the power Father Ryan seemed to have over those who believed in him. "You hear so many people tell you, in such a deep, emotional, honest ways, how much they believed in him. It's strange. You feel like you're listening to victims of emotional abuse, to survivors."

The podcast attempts to track Father Ryan's activities in the years before he wound up in the Show-Me State. In a 2016 cover story, Riverfront Times chronicled the fake priest's arrival in the tiny town of Armstrong, Missouri, where he attempted to establish yet another church. Instead, things got very, very weird, as Father Ryan and his elderly nuns eventually attracted the suspicion of a retired dentist-turned-sheriff's deputy named Russ Harrison.

The only criminal charge that stuck was for felon-in-possession of a firearm, for which Father Ryan pleaded guilty and was sentenced to five years' probation in 2015. (In 1994, as the finance director of Edgerton, Wisconsin, Father Ryan had been convicted for felony misconduct in public office for cashing a $30 check for $300.)

But the fake priest didn't simply disappear. One year later, he filed a federal lawsuit against Harrison and the Howard County Sheriff's Department. The filing accused Harrison of making "many sexual advances, many times on Fr. Ryan" and conspiring to "destroy" the church through the criminal investigation. According to court records, the parties settled the lawsuit in 2017 for $92,750. However, Father Ryan is currently suing his attorney and private investigator over their cut of the settlement, which, after legal fees and expenses, left just over $2,000 for the plaintiff. 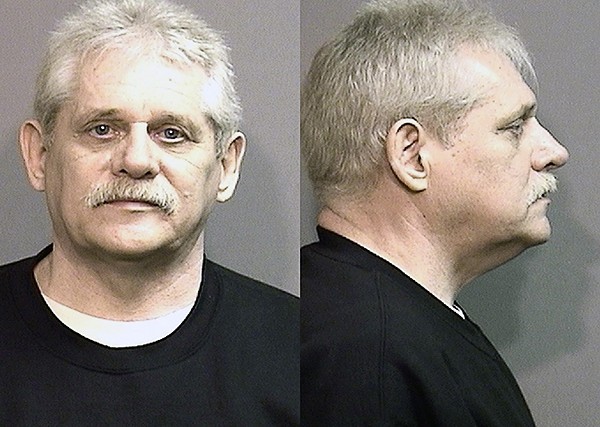 That private investigator, John Brown, is a former academic with a Ph.D. in horticulture. He's also a key figure in Father Ryan's almost-downfall. Brown had been drawn into Father Ryan's orbit through a friendship with Harrison, and in 2016, when the RFT first interviewed Brown, he'd already begun working for Father Ryan's legal defense. At the time, he maintained that the holy man was being unfairly persecuted for his beliefs.

Brown wasn't just a true believer in Father Ryan. He maintained that the real conflict that had bubbled over in Armstrong wasn't between a deputy and a priest, but a fight waged on the spiritual battlefield. Brown believed there was a literal demonic possession in the octagonal church where Father Ryan had established the "abbey." It was a strange contention but one that Brown went to great lengths to substantiate, even hiring a team of "paranormal investigators" to evaluate the church for signs of the devil.

Reached last week by phone, Brown tells RFT that he remains convinced of one thing: The supernatural influence on the case.

"There were demons in that church," he insists, "even if you don't believe it."

But in the intervening years (and subsequent lawsuit) Brown has changed his mind about Father Ryan. He now says that he regrets his role in defending the fake priest, including his decision to pay more than $5,000 in court costs to keep the then-criminally-charged Father Ryan out of prison in 2015.

"I should have never paid that money — he should have gone to prison," Brown says. "I believed Father Ryan, I believed what he said, and I believed he was a priest. Right now he's still asking for donations. He's still conning people."

Property records show that Father Ryan now lives in northern Illinois, in Savanna. He continues to present himself as a priest.