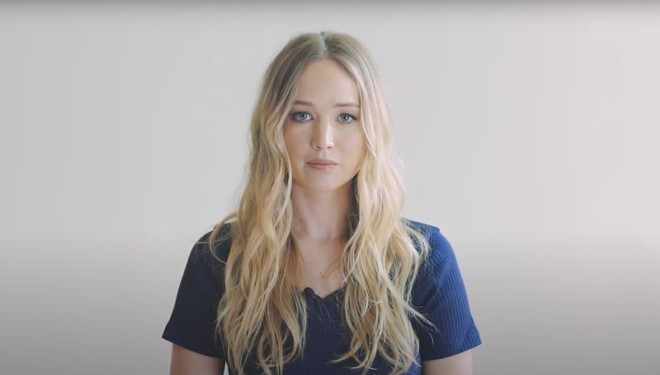 In a new video, Jennifer Lawrence tells Missourians to vote against a proposal that would tear up the Clean Missouri amendment that voters overwhelmingly approved just two years ago.

The Oscar-winning actress' brief, but direct message hits at the tortured legal history of Amendment 3, which has had its language changed by the courts to be more straightforward.

"Two separate Missouri courts ruled that the politicians who put Amendment 3 on the ballot broke the law with misleading claims about what was in the fine print in order to deceive you," Lawrence says in the video. "When politicians' lies are so bad that they break the law, we have to hold them accountable."

Lawrence is a board member of the organization RepresentUS, which has endorsed the No on 3 campaign. She filmed the video on behalf of the campaign, which released a copy to the Riverfront Times.

Critics of Amendment 3 argue that it uses a couple of impressive-sounding, but ultimately minor tweaks to the law in order to camouflage the bill's true purpose — redrawing voting districts in favor of Republican incumbents in the state legislature.

A new way of drawing voting districts was at the heart of Clean Missouri, which passed in 2018 with 62 percent of the vote. That system would create a nonpartisan demographer to draw proposals for the districts, which are adjusted every ten years, following the U.S. Census.

The Republican-led legislature has fought the change ever since Clean Missouri passed, and members have pushed forward Amendment 3 to scrap the position of the demographer and instead task a bipartisan commission, appointed by the governor, to draw the new districts.

The original Amendment 3 ballot language asked voters if they'd like to "ban all lobbyist gifts to legislators and their employees" and "reduce legislative campaign contribution limits" before it got to the redistricting part, which is described as a change to "create a citizen-led independent bipartisan commissions to draw state legislative districts based on one person, one vote, minority voter protection, compactness, competitiveness, fairness and other criteria?”


In reality, there is already a $5 limit on the lobbyist gifts and the reduction in campaign contribution is a total of $100, from $2,500 to $2,400. It never mentioned that the part about drawing the legislative districts is a repeal of a measure voters approved in 2018.

A Cole County judge ruled that the wording was "misleading, unfair, and insufficient" and violated the law. An appeals court altered replacement language suggested by the Cole County judge, but still moved toward making it more clear that Amendment 3 is a repeal of the 2018 vote.

Lawrence, who filmed the 2010 film Winter's Bone in the Ozarks, has advocated against gerrymandering as part of her work with RepresentUS. She closes the 24-second video with a plea: "This November, please vote no on Amendment 3."