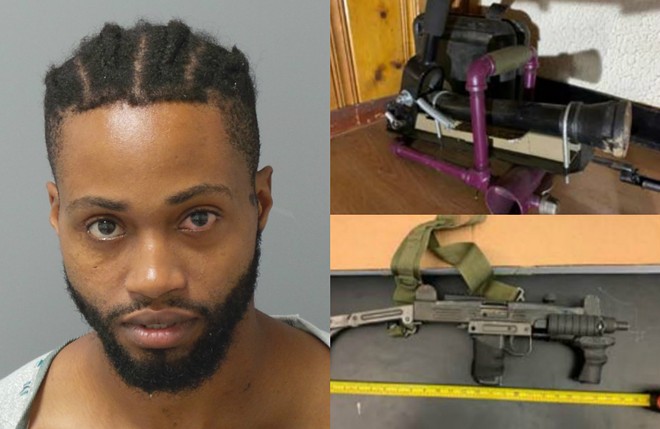 A man accused of firing on a pair of St. Louis officers with a machine gun last month — and who is now facing multiple criminal charges in St. Louis — was indicted Wednesday on federal charges related to a prodigious personal arsenal that included an unregistered machine gun and what prosecutors described as a "homemade cannon device."

Just after 4 a.m. on September 10, reports of a man shooting "multiple rounds" in the street drew officers to the area near Marcus and Kossuth avenues in the Penrose neighborhood in north city. There they found Marc Harold Taylor, who lives on the block.

Taylor refused to put down his rifle, police say, and instead fired at the two officers while they were still sitting in their patrol vehicle, hitting the top of the SUV amid the spray of bullets.

Hours later, during a press conference, St. Louis police Chief John Hayden told reporters that neither officer had been struck. The officers had returned fire,  hitting Taylor, the chief said. The 28-year-old was struck in the torso and stumbled to a nearby street before he was arrested and taken to a hospital in critical condition.

Four days later, on September 14, St. Louis police revealed more about the incident, including evidence of what Taylor was doing before he shot at the officers responding to the complaints of gunfire. It was the same day that the St. Louis Circuit Attorney's Office formally charged Taylor with firing at a motor vehicle, three counts of armed criminal action, and two counts of assault. According to online court records, a judge ordered Taylor held without bail.

The department released photos of the items they'd discovered in Taylor's home, including two rifles, two handguns, and what appeared to be a cannon braced by purple-colored metal pipes. The photos also showed two glass jars labeled "black powder" and "cannon fuse."

Here are some additional items seized from inside the residence in the 4700 block of Kossuth after the officer involved shooting on 9/10/20. https://t.co/UGJbd1bCJe pic.twitter.com/ClY6dEQrX4

These firearms were recovered from this morning’s officer involved shooting in the 4700 block of Kossuth.


There was more. According to police, Taylor's pickup truck had been involved in a crash downtown near South 8th Street and Chouteau Avenue less than an hour before the shootings started. When officers searched Taylor's truck, they found a box of bullets and what appeared to be a tactical or bulletproof vest.

About 30 minutes before the officer involved shooting, officers responded to a 2-car crash @ S 8th/Chouteau. One driver stayed & had minor injuries. The driver a pickup truck fled the scene. Officers located these times in the abandoned truck which was registered to Marc Taylor. https://t.co/fkg5jZ628j pic.twitter.com/f23EuCoxag


Then the feds opened their own investigation. It was Taylor's cannon and fully-automatic rifle that drew the attention of prosecutors for the U.S. Attorney's Office in Missouri's Eastern District. On Wednesday, a federal grand jury indicted him on charges for possessing a destructive device and possessing a machine gun. Both crimes carry a maximum prison sentence of ten years in prison.