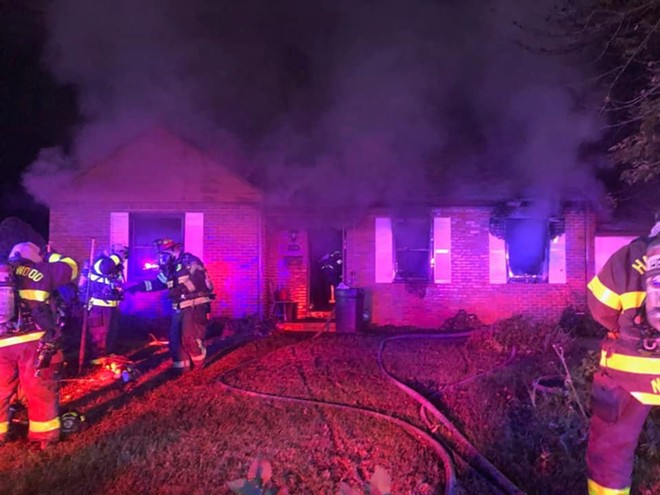 A suspected arsonist under investigation for a massive house fire in Florissant this morning is the same man who clambered into a Berkeley firetruck at the scene, authorities say.

However, whether the as-yet-unnamed suspect was actually attempting to drive off with the firetruck isn't clear. Steve Michael, a public information officer with the Florissant Police Department, confirmed that the officers arrested a white male on suspicion of arson and "tampering" related to the firetruck.

The department plans on applying for warrants related to the incident.

"The gentleman was inside one of the firetrucks, I don't know if he couldn't figure it out or if he was just sitting in it," Michael told RFT, adding, "He was definitely not supposed to be in it."

The incident began with reports of a house fire on the 1300 block of South New Florissant Road shortly after 1 a.m. Along with firefighters and emergency crews, a KMOV (Channel 4) photographer was also on the scene to capture footage of the blaze. Their camera also recorded a group of officers arresting the suspected arsonist after he was extracted from the firetruck.

Firefighters also found containers "that may have contained some accelerant," Flauter added, though he said that the Florrisant police are handling the investigation into the causes of the two fires.

In a statement posted to Facebook this morning, the fire protection district said the house was unoccupied at the time of the fire.

"No one was injured and our crews were able to bring this fire under control quickly," the district said.