Landlord Orders Out Tenant Who Told RFT About Nightmare Conditions 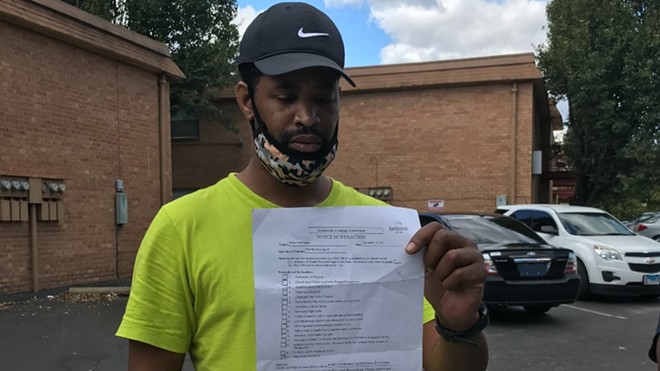 A woman who lives in the long-troubled Southwest Crossing apartment complex, in South City, says she and her family have been told to leave by the apartment owner because she spoke to the Riverfront Times for a story.

The RFT story, published in late August, was about the wave of evictions facing St. Louis because of the economic recession caused by the COVID-19 pandemic. In the story, the woman — Janica Washington — stated that she and her four children would have nowhere to go if they were kicked out.

Washington received a letter on September 18 from the Sansone Group informing her she had committed an infraction of tenant rules “due to over occupancy for a two bedroom apartment home per publicized Riverfront Times interview.”

Four days later, Washington and her husband Terrell Porter received a letter of termination of vacancy from Sansone informing them they had 30 days to vacate for non-payment of rent.

“The first thing that came to my mind was, ‘They can’t do this,’” Washington says.

She and Porter acknowledge they have not paid rent in recent months. But that’s because they have joined the apartment complex’s few remaining tenants in a rent strike in response to what they say is Sansone’s failures to repair a wide range of health and safety problems that have remained untouched since Sansone took over management last December. These defects include mold growing on many apartment ceilings walls, leaking pipes, crumbling plaster and drywall, flies in refrigerators and the strong odor of feces emanating from the ground floor of the apartment building where Washington and Porter live with their four kids.

“I don’t know what’s happening down there,” Washington says. “I just know it smells like feces.”

Other tenants interviewed for this story recite a litany of other problems in the apartment complex, including accounts of the many vacant and boarded-up apartments being used as venues for drug dealing, prostitution and the sheltering of homeless people.

Washington and Porter plan on talking to the ArchCity Defenders, a local legal aid group, to challenge the order to vacate.

“I know this was not right,” Porter says. “I know you can’t evict us for having an interview with the Riverfront Times. That’s not right at all.”

Washington and Porter still have a few cards left to play. St. Louis city officials extended the city’s eviction moratorium until Nov. 6 — the second month in a row they took that step. In addition, Washington and Porter have not received any court paperwork, signed by a judge, ordering them to leave their apartment, as required by law.

Porter called Sansone Group “heartless” for seeking to evict a family during the middle of a nationwide pandemic.

“This is just wrong,” Porter says.

Correction: The original version of this story misspelled Terrell Porter's first name. We regret the error.